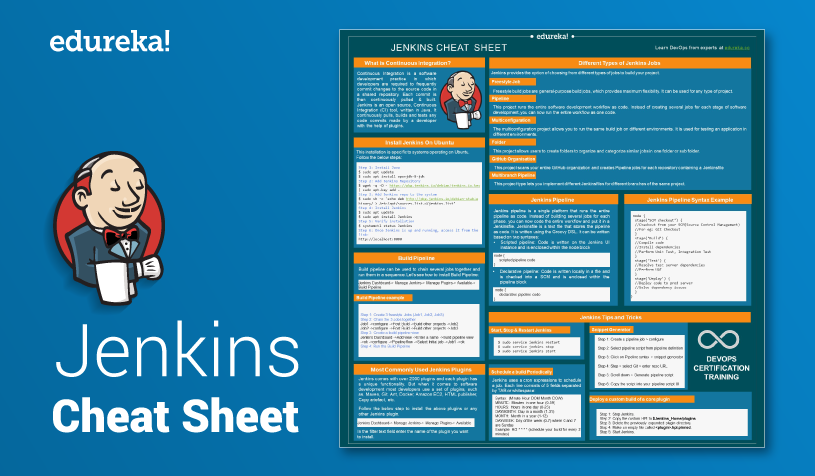 A handy Jenkins cheat sheet which covers the basics of Jenkins along with the best practices that are needed for software development.

A handy Jenkins cheat sheet which covers the basics of Jenkins along with the best practices that are needed for software development.

Are you a DevOps Enthusiast looking to explore different tools? If yes, then you have landed at the right place. DevOps Engineers are the most demanded and payed professionals all around the world. With this in mind let me introduce you to the most popular DevOps Tool, Jenkins. This Jenkins cheat sheet is for beginners who have prior knowledge about how a software development process occurs.

Continuous Integration is a software development practice in which developers are required to frequently commit changes to the source code in a shared repository. Each commit is then continuously pulled & built. Jenkins is an open source, Continuous Integration (CI) tool, written in Java. It continuously pulls, builds and tests any code commits made by a developer with the help of plugins. 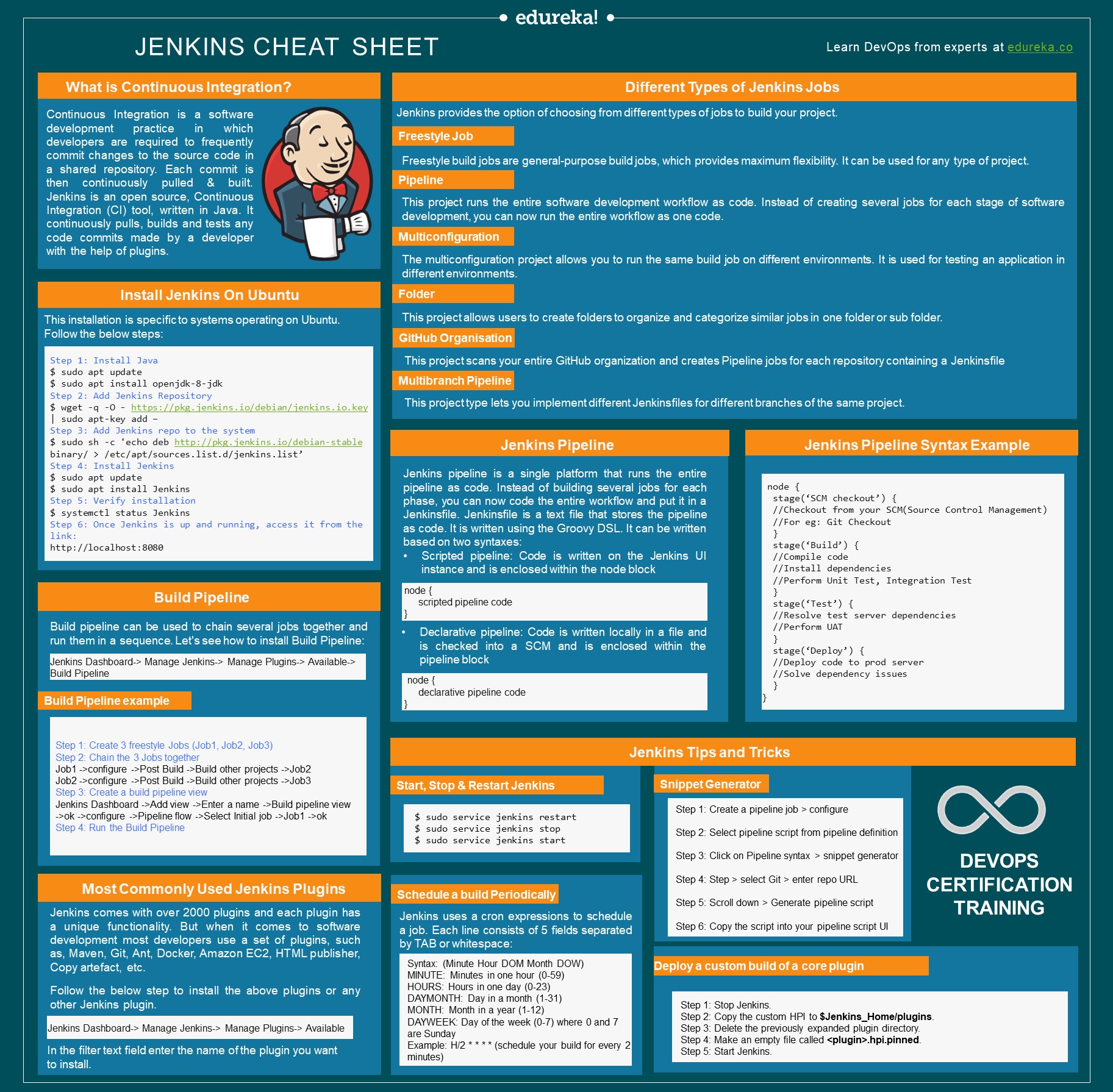 Let’s start by installing Jenkins. This installation is specific to systems operating on Ubuntu. Follow the below steps:

Jenkins comes with over 2000 plugins and each plugin has a unique functionality. But when it comes to software development most developers use a set of plugins, such as

Follow the below step to install the above plugins or any other Jenkins plugin.

In the filter text field enter the name of the plugin you want to install.

Jenkins provides the option of choosing from different types of jobs to build your project.

Below are the types of jobs you can choose from:

Freestyle build jobs are general-purpose build jobs, which provides maximum flexibility. It can be used for any type of project.

This project allows users to create folders to organize and categorize similar jobs in one folder or sub folder.

This project type lets you implement different Jenkinsfiles for different branches of the same project.

Build pipeline can be used to chain several jobs together and run them in a sequence. Let’s see how to install Build Pipeline:

In the filter text field enter the name of the plugin you want to install.

Jenkins pipeline is a single platform that runs the entire _pipeline as code. _Instead of building several jobs for each phase, you can now code the entire workflow and put it in a Jenkinsfile.

Jenkinsfile is a text file that stores the pipeline as code. It is written using the Groovy DSL_. _It can be written based on two syntaxes:

The below fundamentals are common to both, scripted and declarative pipeline:

After installing Jenkins, building jobs using the Build pipeline and briefly discussing about pipeline concepts, let’s see how to create a Jenkins pipeline.

Follow the below steps to create both, a scripted pipeline and a declarative pipeline:

Follow the below command to start, stop and restart Jenkins through the CLI.

Deploy a custom build of a core plugin

Jenkins uses a cron expressions to schedule a job. Each line consists of 5 fields separated by TAB or whitespace:

A tool that lets users generate code for individual steps in a scripted pipeline. Let’s look at an example:

Below is an image of the Snippet Generator. You can select from a variety of steps and generate a code for each step.