A Guide to Functional Programming in Python with Examples 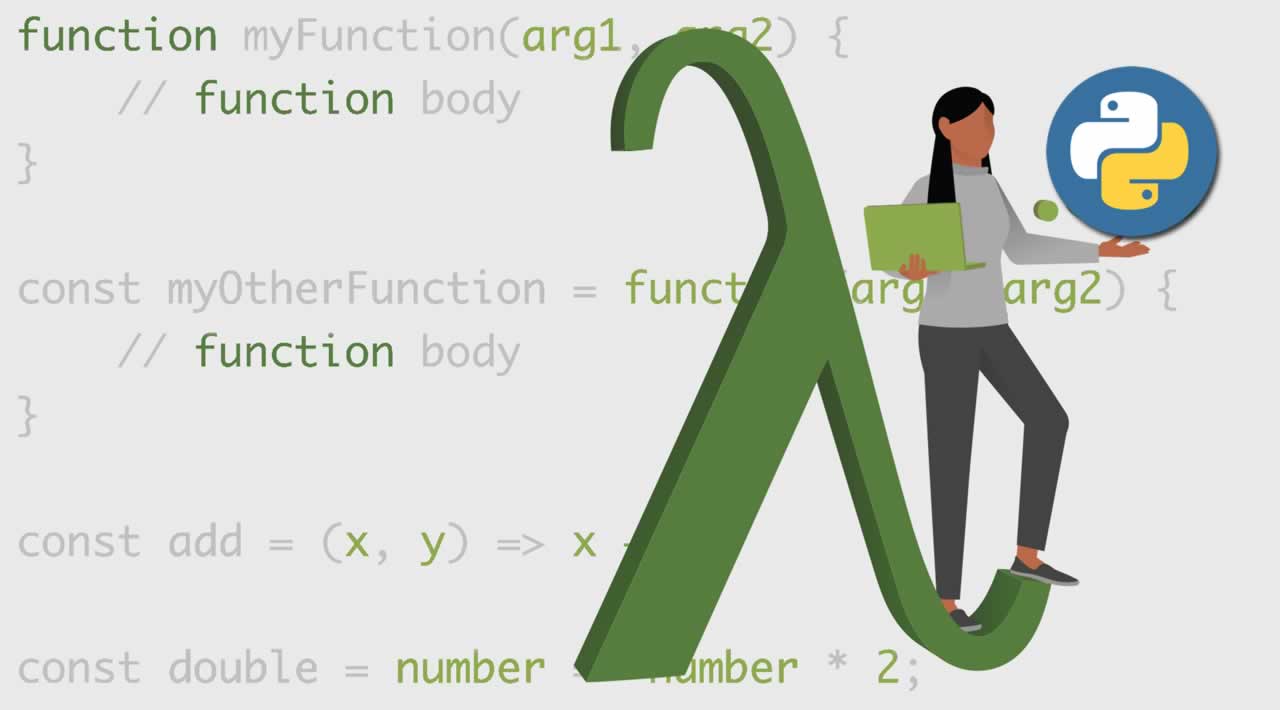 Functional programming is a kind of the declarative programming paradigm where functions represent relations among objects, like in mathematics. Thus, functions are much more than ordinary routines.

In this article, you’ll find explanations on several important principles and concepts related to functional programming:

A pure function is a function that:

If a function uses an object from a higher scope or random numbers, communicates with files and so on, it might be impure because its result doesn’t depend only on its arguments.

A function that modifies objects outside of its scope, write to files, prints to the console and so on, have side effects and might be impure as well.

Pure functions usually don’t use objects from outer scopes and thus avoid shared states. This might simplify a program and help escape some errors.

Anonymous (lambda) functions can be very convenient for functional programming constructs. They don’t have names and usually are created ad-hoc, with a single purpose.

In Python, you create an anonymous function with the lambda keyword:

The above statement creates the function that accepts two arguments and returns their sum. In the next example, the functions f and g do the same thing:

A recursive function is a function that calls itself during the execution. For example, we can use recursion to find the factorial in the functional style:

Alternatively, we can solve the same problem with the while or for loop:

In functional programming, functions are the first-class objects, also called higher-order functions — the data types treated the same way as other types.

Functions (or, to be more precise, their pointers or references) can be passed as arguments to and returned from other functions. They can also be used as variables inside programs.

The code below illustrates passing the built-in function max as an argument of the function f and calling it from inside f.

They are all supported in Python.

Mapping is performed with the built-in class map. It takes a function (or method, or any callable) as the first argument and an iterable (like a list or tuple) as the second argument, and returns the iterator with the results of calling the function on the items of the iterable:

In this example, the built-in function abs is called with the arguments -2, -1, 0, 1 and 2, respectively. We can obtain the same result with the list comprehension:

We don’t have to use built-in functions. It is possible to provide a custom function (or method, or any callable). Lambda functions can be particularly convenient in such cases:

The statement above multiplied each item of the list [-2, -1, 0, 1, 2] with 2 using the custom (lambda) function lambda item: 2 * item. Of course, we can use the comprehension to achieve the same thing:

Filtering is performed with the built-in class filter. It also takes a function (or method, or any callable) as the first argument and iterable as the second. It calls the function on the items of the iterable and returns a new iterable with the items for which the function returned True or anything that is evaluated as True. For example:

The statement above returns the list of non-negative items of [-2, -1, 0, 1, 2], as defined with the function lambda item: item >= 0. Again, the same result can be achieved using the comprehension:

Reducing is performed with the function reduce from the module functools. Again, it takes two arguments: a function and iterable. It calls the function on the first two items of the iterable, then on the result of this operation and the third item and so on. It returns a single value. For example, we can find the sum of all items of a list like this:

This example is just for illustration. The preferred way of calculating the sum is using the built-in reducing function sum:

An immutable object is an object whose state can’t be modified once it’s created. Contrary, a mutable object allows changes in its state.

For example, in Python, lists are mutable, while tuples are immutable:

We can modify lists by appending them new elements, but when we try to do this with tuples, they are not changed but new instances are created:

The underlying concepts and principles — especially higher-order functions, immutable data and the lack of side effects — imply important advantages of functional programs:

Functional programming is a valuable paradigm worth learning. In addition to the advantages listed above, it’ll probably give you a new perspective on solving programming problems.

Python Lambda Functions. Python lambda functions are an invaluable feature. One of the benefits of using Python is that it facilitates a relatively compact code structure compared to other programming languages. This means getting so much more done with fewer lines of code. One such tool is the lambda function. These allow us to create anonymous functions in python.

An Introduction to the Python Range Function.

Let’s learn about the python range function in detail. The range type represents an immutable sequence of numbers and is commonly used for looping a specific number of times in for loops.

Learning to write better code — code that's readable, maintainable, and debuggable — is a crucial skill for being an effective part of a data science team.