5 Common JavaScript Gotchas That You Should Avoid 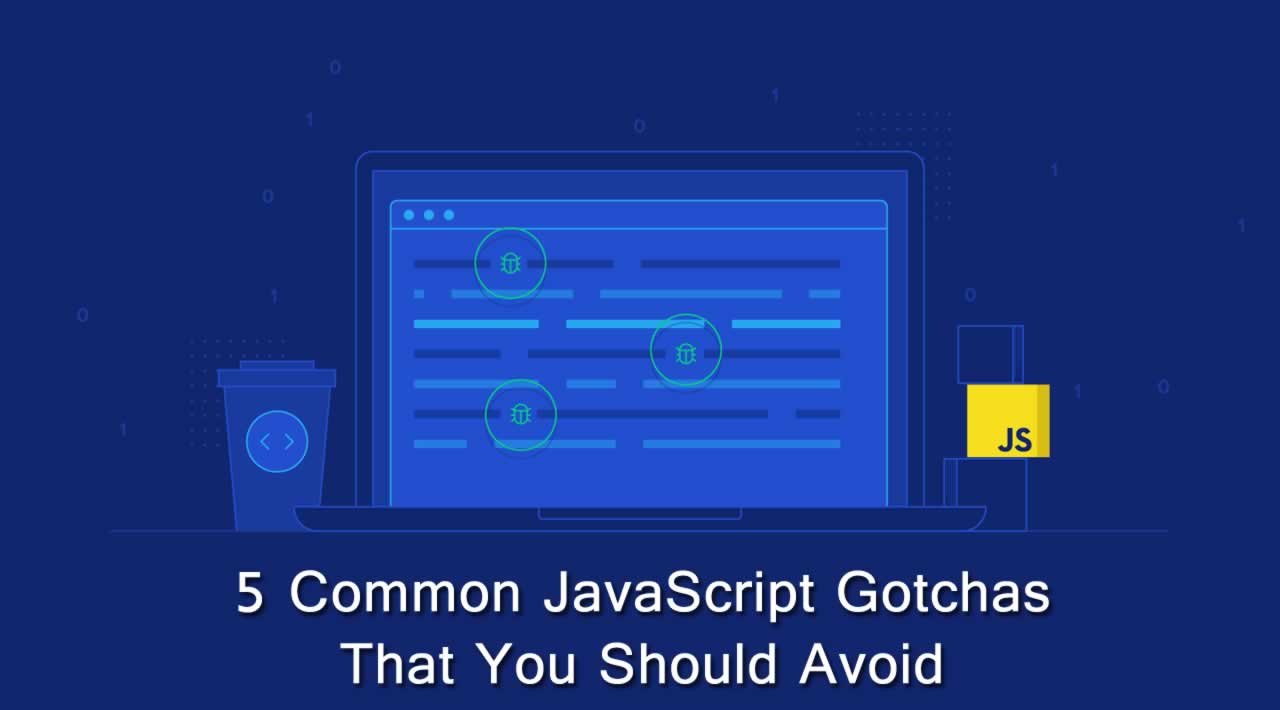 In this post, we are going to discuss 5 common JavaScript gotchas and how you can avoid them.

Today JavaScript is the most popular language among developers. Modern frontend development has benefited a lot from JavaScript and its rise. It has definitely emerged as one of the most sort after skill in the programming world with plenty of job opportunities.

Learning JavaScript at the beginning may seem easy, but the language comes with own sets of nuances and complexities. In this post, we are going to discuss 5 common JavaScript gotchas and how you can avoid them.

Let’s look at some examples to understand how the strict equality works.

In this example, we are comparing two numbers. Here the value is the same and equal. Also the type is number and equal as well. This makes it return a true.

Alright, let’s take a look at another example.

Now, let’s take a look at the double equals operator. When checking for double equals in JavaScript, we are testing loose equality. This means that we only compare the values, and not the type.

Let’s go back to our previous example, and replace the triple equals with double equals.

The example above also returns true and qualifies as equals with a loose check. Those new to JavaScript may see some undesired outcomes from their code because of the loose equality and type coercion. Hence it is best to use strict equality for equality checks.

2. Confusion in using var vs. let

There is often confusion between the use of var vs. let. Some JavaScript newbies think they can use them interchangeably without fully understanding their differences. Let’s take a look at how they are different.

Before ES6 (ES2015) few years ago, there was only one way to declare variables and constants in JavaScript, which was using var.

To understand var, we need to first learn how they are scoped. Let’s look at a simple example below to learn more about it.

Now, in our code snippet above, we have a variable i that is declared inside the for loop. The console output that you will see for this code is shown below.

var variables have a function-scope, if they are not declared within a function, they have a global-scope.

After ES6/ES2015, JavaScript introduced let to overcome the problems faced with var.

Let’s go back to our previous example, and replace the var with let instead.

The output that we see for this example after replacing it with let will be slightly different than the previous example.

The console log that happens outside the for-loop block returns an error. It does not know what i is, and returns that i is not defined. This is a desirable output that we get with the use of let instead of var.

let is block-scoped and variables declared within a block of code cannot be accessed outside of it.

I hope this clears up the difference between var and let, and their usage. The fundamental difference is in their scope.

3. The ‘+’ can be used for both addition and string concatenation

Typically, we think of the ‘+’ symbol as the sign for adding numbers. But in JavaScript, we can use the same symbol for concatenation of strings. You have to use it with caution when you are operating with both strings and numbers together.

Let’s take a look at some examples to see where you may go wrong.

In the examples above, when there is a string involved, the ‘+’ sign always concatenates the string, even if the other variable is a number. We can see that 10 + ’30’ results in a string ‘1030’. Those new to JavaScript, may encounter this problem since this is not common in other languages.

If you use the ‘+’ to add an integer and a string, it will result in the concatenation of both.

To avoid this concatenation, if your original intention was to add the variables, make sure to convert the string to an integer.

4. What is the difference between undefined and null?

Most programmers are aware of null. It is common in other programming languages. But what on earth is undefined in JavaScript?

Undefined usually means a variable has been declared, but not defined.

In this case value has been declared but it is not assigned a value. This results in undefined.

I have seen many codebases with a lot of null checking against properties that are uninitialized. This is wrong and will result in unexpected behavior. Uninitialized properties in other languages get a default value of null, but in JavaScript they are undefined. What makes it even more misleading, is that if you did a loose equality check of (x == null), even if x is undefined, it will return true. This is because of the type coercion that we discussed in the previous point.

Isn’t JavaScript a funny language with all these quirks?

5. Semicolons can be a problem sometimes

Take a look at this code sample for example:

Can anyone guess what is wrong with this piece of code?

You might think that it would return the object literal, but it actually returns undefined. This is because automatic semicolon insertion takes place making it an empty return statement.

This is how the code looks after the semicolons are inserted.

Strange isn’t it. You can add a linter rule to remind you about this. You can add a rule to ensure that a new line never begins with an opening brace, bracket or template string literal. Your code should instead look like this:

JavaScript is easy to pick up, but hard to master. It takes a while to learn the quirkiness and nuances of the language before you master it.

☞ Build a CMS with Laravel and Vue

☞ 12 Concepts That Will Level Up Your JavaScript Skills