10 tips to save time and and sanity with Git 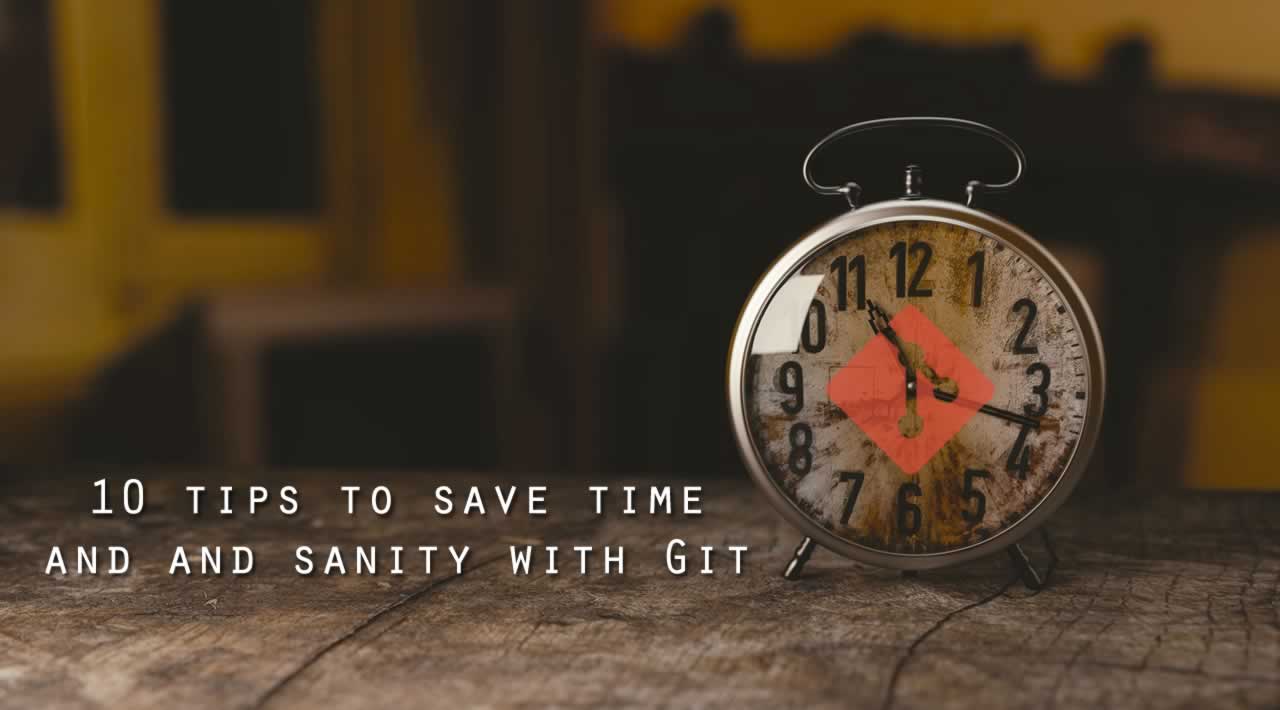 In this article, we’re going to discuss the miscellaneous Git tricks you should know as a developer, data scientist, or product manager. We’ll look at inspecting, removing, and tidying with Git.

1. Checkout a single file from another branch

Have you ever destroyed a file and just wished you could have a fresh start? Or needed the changes you made in one file in another branch? This command lets you grab just one file from another branch.

You can use the same trick to checkout one file from a specific commit.

This is an effective trick if cherry-pick would pick up other files that you don't need.

Personally, I think they are an important part of the history of a project, and you shouldn't try to circumvent them in your workflow.

That being said, if you want to look at a project's history in at a glance, you can use this flag to filter out merge commits.

This one comes in handy when you accidentally commit something with a typo or misleading commit message.

The -v is optional, but I like it because it shows a lot of information about the changes which helps me to write a more descriptive commit message.

4. Get rid of all untracked changes

Pretty self-explanatory, but in case you're not familiar with the idea:

If you create a new file that didn't previously exist in the git history, you've made an untracked change. To start tracking that file, you'd need to commit it to the repo.

Sometimes, you change your mind halfway through a commit and really just want to start over without all the changes you've got. Well, git checkout . will get rid of all the tracked changes you've made, but your untracked changes will still be floating around. To remedy that, we've got git clean.

This one mostly just makes you look cool. It can be useful, though, to visualize all of your long standing branches.

6. Ask git for a changelog

If you're looking for a condensed explanation of what changed, and who changed it, you can ask git to give you something that looks a lot like a changelog.

In this example <commit> should be replaced with the commit you want to target for the beginning of your log. Basically with git shortlog eafbc3c..HEAD you're saying, "Show me what changed between commit eafbc3c and right now." 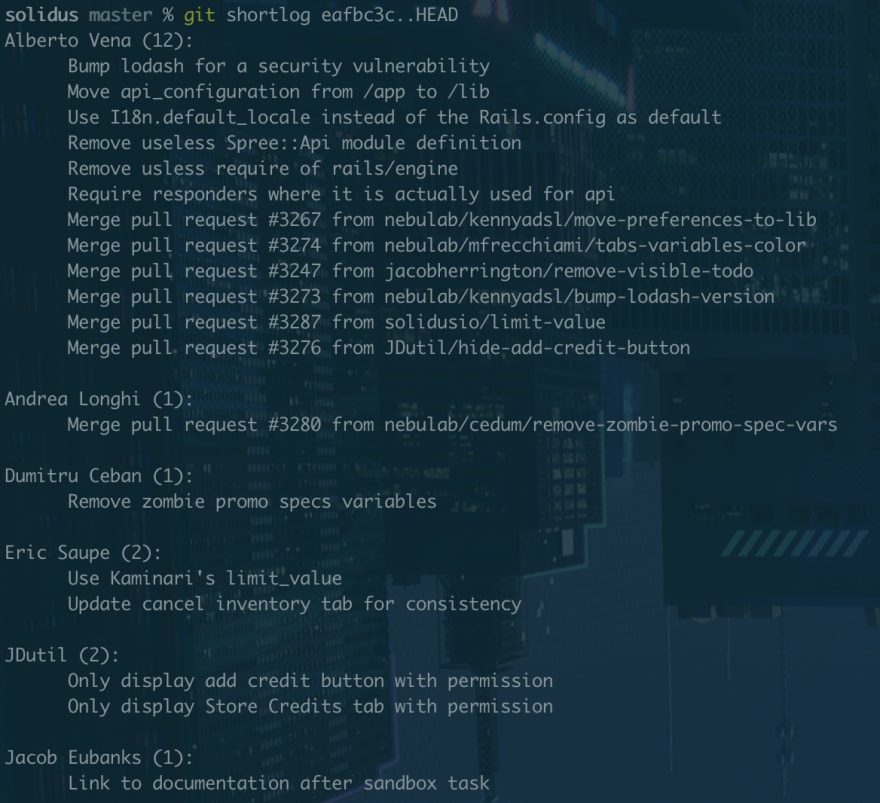 You can do cool tricks like git shortlog HEAD~20.. to get the shortlog for the last 20 commits.

In a similar vein of thinking, you might need to see what changed in a repo between two days.

Thankfully, git has your back. The git log commit accepts --since and --until as flags. 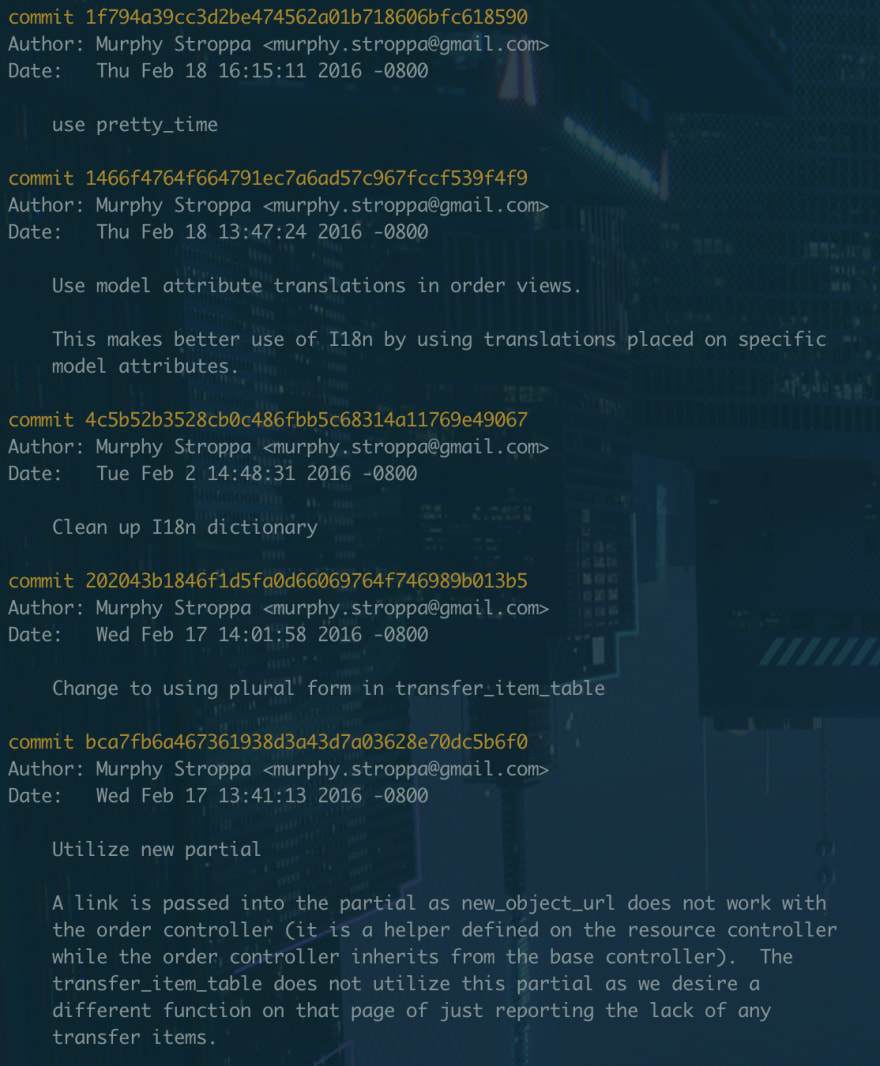 Now, I can see that Murphy was pretty active in mid February.

Sometimes you might alias a few commands and forget them later, or maybe there are some aliases defined by a shared config you use.

This is a trick I found somewhere, and even though it's not exclusively a feature of git, we are taking advantage of the git config command.

Try it out, see if you have any forgotten aliases!

9. Search for commits that include a keyword

If you know exactly what piece of code you are looking for, or exactly what keyword you need to find changes on, you can search the log by code.

This will give you a list of commits that somehow affected a line of code or text containing your search string.

In this example, I'll find a list of commits that somehow manipulated the string config.menu_items.

Not that secret, but pretty super:

git is a powerful tool, and is full of neat tricks. This list is in no way comprehensive or complete, so you should do some exploring and read the git documentation. Feel free to share any cool tricks you find on this thread, I love learning about the tools that help me write code!

☞ How To Use Git: A Reference Guide

☞ Setting up Gridsome with GitLab, NetlifyCMS and Netlify

☞ Getting Started Faster with Git and GitHub

☞ 5 GitHub Repositories that Every New Developer Must Follow

Hello guys , this is my second post on medium. I am taking a data science bootcamp course at awari.com.br and I intend to write about the topics that I am going to learn. First because I want to share a little of my knowledge and it’s a great way to learn as well. Today I am going to write about Git and Github , explain what they are and describe some basics commands on git.