What is NoSQL Database?

This video is based on NoSQL tutorial. The topics covered in this NoSQL tutorial video are essential for mastering NoSQL. In this tutorial we will cover what is NoSQL, difference between RDBMS and NoSQL databases, benefits of NoSQL and types of NoSQL. NoSQL (commonly referred to as "Not Only SQL") represents a completely different framework of databases that allows for high-performance, agile processing of information at massive scale.

In this article, you'll learn what a NoSQL database is, why (and when!) you should use one, and how to get started.

NoSQL databases (aka "not only SQL") are non-tabular databases and store data differently than relational tables. NoSQL databases come in a variety of types based on their data model. The main types are document, key-value, wide-column, and graph. They provide flexible schemas and scale easily with large amounts of data and high user loads.

What is a NoSQL database?

NoSQL databases emerged in the late 2000s as the cost of storage dramatically decreased. Gone were the days of needing to create a complex, difficult-to-manage data model in order to avoid data duplication. Developers (rather than storage) were becoming the primary cost of software development, so NoSQL databases optimized for developer productivity.

As storage costs rapidly decreased, the amount of data that applications needed to store and query increased. This data came in all shapes and sizes — structured, semi-structured, and polymorphic — and defining the schema in advance became nearly impossible. NoSQL databases allow developers to store huge amounts of unstructured data, giving them a lot of flexibility.

Additionally, the Agile Manifesto was rising in popularity, and software engineers were rethinking the way they developed software. They were recognizing the need to rapidly adapt to changing requirements. They needed the ability to iterate quickly and make changes throughout their software stack — all the way down to the database. NoSQL databases gave them this flexibility.

Cloud computing also rose in popularity, and developers began using public clouds to host their applications and data. They wanted the ability to distribute data across multiple servers and regions to make their applications resilient, to scale out instead of scale up, and to intelligently geo-place their data. Some NoSQL databases like MongoDB provide these capabilities.

Difference between RDBMS and NoSQL databases

Let's consider an example of storing information about a user and their hobbies. We need to store a user's first name, last name, cell phone number, city, and hobbies.

In a relational database, we'd likely create two tables: one for Users and one for Hobbies.

In order to retrieve all of the information about a user and their hobbies, information from the Users table and Hobbies table will need to be joined together.

The data model we design for a NoSQL database will depend on the type of NoSQL database we choose. Let's consider how to store the same information about a user and their hobbies in a document database like MongoDB.

In order to retrieve all of the information about a user and their hobbies, a single document can be retrieved from the database. No joins are required, resulting in faster queries.

Other differences between RDBMS and relational databases

While the example above highlights the differences in data models between relational databases and NoSQL databases, many other important differences exist, including:

NoSQL databases are used in nearly every industry. Use cases range from the highly critical (e.g., storing financial data and healthcare records) to the more fun and frivolous (e.g., storing IoT readings from a smart kitty litter box).

In the following sections, we'll explore when you should choose to use a NoSQL database and common misconceptions about NoSQL databases.

When should NoSQL be used?

When deciding which database to use, decision-makers typically find one or more of the following factors lead them to selecting a NoSQL database:

Over the years, many misconceptions about NoSQL databases have spread throughout the developer community. In this section, we'll discuss two of the most common misconceptions:

Note that the way data is modeled in NoSQL databases can eliminate the need for multi-record transactions in many use cases. Consider the earlier example where we stored information about a user and their hobbies in both a relational database and a document database. In order to ensure information about a user and their hobbies was updated together in a relational database, we'd need to use a transaction to update records in two tables. In order to do the same in a document database, we could update a single document — no multi-record transaction required.

A variety of NoSQL databases exist. Today, we'll be trying MongoDB, the world's most popular NoSQL database according to DB-Engines.

In this tutorial, you'll load a sample database and learn to query it — all without installing anything on your computer or paying anything.

The easiest way to get started with MongoDB is MongoDB Atlas. Atlas is MongoDB's fully managed database-as-a-service. Atlas has a forever free tier, which is what you'll be using today.

Create a cluster and a database

A cluster is a place where you can store your MongoDB databases. In this section, you'll create a free cluster.

Once you have a cluster, you can begin storing data in Atlas. You could choose to manually create a database in the Atlas Data Explorer, in the MongoDB Shell, in MongoDB Compass, or using your favorite programming language. Instead, in this example, you will import Atlas's sample dataset.

Now that you have data in your cluster, let's query it! Just like you had multiple ways to create a database, you have multiple options for querying a database: in the Atlas Data Explorer, in the MongoDB Shell, in MongoDB Compass, or using your favorite programming language.

In this section, you’ll query the database using the Atlas Data Explorer. This is a good way to get started querying, as it requires zero setup. 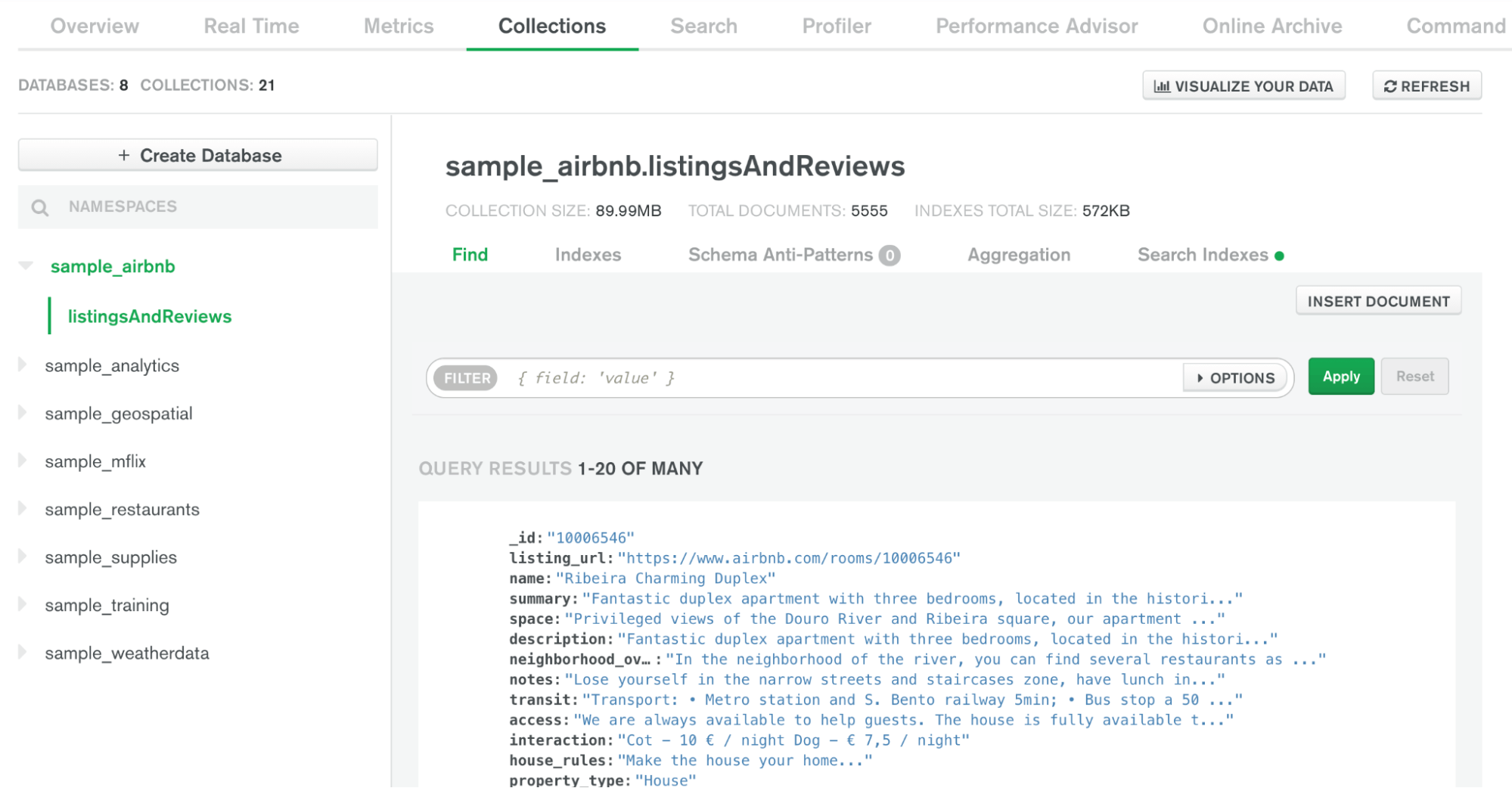 The Data Explorer displays a list of documents in the listingsAndReviews collection.

Expand the sample_mflix database in the left panel. A list of the database's collections is displayed.

Select the movies collection. The Find View is displayed in the right panel. The first twenty documents of the results are displayed.

Two documents with the title “Pride and Prejudice” are returned. 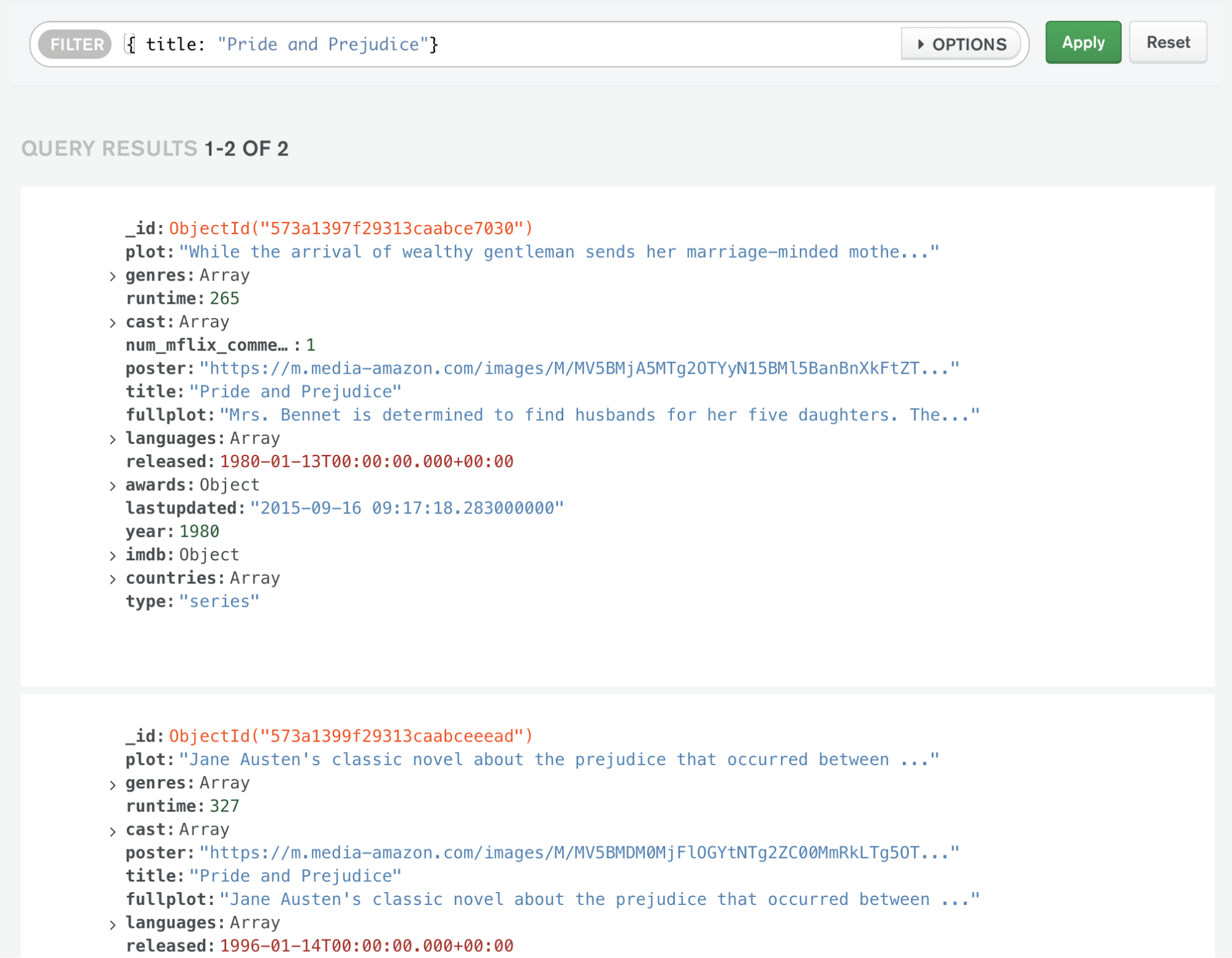 The results for querying for movies with the title "Pride and Prejudice".

In this tutorial, we only scratched the surface of what you can do in MongoDB and Atlas.
Continue interacting with your data by using the Data Explorer to insert new documents, edit existing documents, and delete documents.

When you are ready to try more advanced queries that aggregate your data, create an aggregation pipeline. The aggregation framework is an incredibly powerful tool for analyzing your data. To learn more, take the free MongoDB University Course M121 The MongoDB Aggregation Framework.

When you want to visualize your data, check out MongoDB Charts. Charts is the easiest way to visualize data stored in Atlas and Atlas Data Lake. Charts allows you to create dashboards that are filled with visualizations of your data. *Read-only select queries are technically part of its Data Query Language (DQL) group. Still, operationally, many refer to it as DML because it can do more than read-only queries.

What Can a SQL Database Do?

What is a SQL Query?