Overview of topics and the calendar for the Fall 2020 semester of 8.701 Nuclear and Particle Physics.

We encourage constructive comments and discussion on OCW’s YouTube and other social media channels. Personal attacks, hate speech, trolling, and inappropriate comments are not allowed and may be removed. More details at https://ocw.mit.edu/comments. 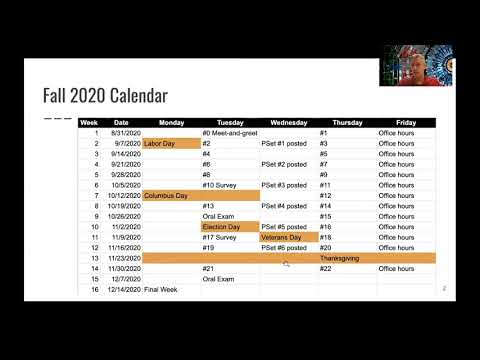 Particle detector is a device that is used to quantify the momenta and identify the particle that passes through the detector after being produced in a collision or a decay, which also referred to as an event. The event might be a collision deliberately engineered to occur within the detector leading too many particles which in turn decay into many more, or it could be a decay the occurs naturally. To reconstruct the event and identify every particle produced by the collision, its necessary to know the mass and the momentum of the particles. The mass can be found by measuring the momentum and either the energy or velocity. The modern large scale particle detectors like LHCb or ATLAS, encompass many forms of tracking chambers and calorimeters that surround the interaction point also know as hermetic detectors.

Cloud chamber is the earliest tracking detector. In oversaturated vapour, primary ionization clusters left behind a charged particle will become centres of condensation. Droplets will follow the track of a particle, their number per unit of length being proportional to the density of ionization. Such conditions can be achieved by the fast expansion of the chamber volume, which in its turn can be triggered by an external particle detector.

Emulsion consist of crystals of AgBr and AgCl suspended in a body of gel. An ionizing particle passing through the emulsion breaks up these molecules. After developing the film, the released metallic Silver grains are locked in the main body of the emulsion film while the remaining part will be washed away. With the of a microscope, these grains usually of about half micron diameter, it can be observed including their exceptional high spatial resolution as a black dots. Emulsion films are still being used due to their many advantages

A bubble chamber is a container with liquefied gas like hydrogen, the gas is close to the boiling point. When a charged particles going through the chamber it will leave behind clusters of ionization. If the pressure is dropped for a short time, the boiling temperature drops and the liquid becomes overheated. Now the boiling is about to begin, bubbles are formed on ionization clusters and start growing. In about 1 ms, when bubbles are about 0.1−1mm in size, pictures from different angles are taken and pressure is restored. The increased pressure brings the liquid back below the point of boiling and all bubbles collapse. Multiple pictures take from different directions allow for unambiguous 3D reconstruction.

If you live in the South Jersey region (Voorhees, Cherry Hill, Marlton, etc.) and need Physical therapy for Sports injuries consider coming to Body Solutions. We utilize a true holistic approach for faster recovery from your injuries. Watch this video on physical therapy for sports injuries for optimal recovery. Learn how we use higher level understanding of exercise and how the body works to achieve amazing results.
The key to optimal recovery after a sports injury is immediate initiation of the right exercises and providing your body with the right nutrients to speed up healing. While injured body parts like an ankle sprain, a torn ACL or meniscus, a shoulder strain, or a hip strain needs to be rested, you need to initiate immediate exercises for other body parts. This will reduce the compensation and keep your body “even” and “balanced”.
For example, if you have an right ankle sprain, you need to immediately start strengthening your right hip and knee to avoid onset of weakness AND strengthen your left ankle. By working your left ankle, you indirectly accelerate the recovery process of the right ankle in personal trainer Voorhees NJ.

If you are in pain how with a new injury, you can get their “Sinew Warming Soak”. Then rub their Acute Sinew Liniment on the area 2-3 times a day to speed up healing. If you are having chronic pain that is no longer swollen, then use their Sinew Relaxing Soak and the Chronic Sinew Liniment.
For chronic injuries, get the “chronic Liniment” to rub on 3 times a day and then rub the “injury poultice” at night to sleep with on Body Solutions Voorhees. For acute injuries, get the “acute liniment” and rub it on 3 times a day. Then get the “herbal ice” to rub on at night to sleep with it on.
Foam rolling is a way to self-massage and physical therapy Voorhees NJ. While typical foam rollers are just round, our bodies have many grooves, bumps, and pointy spots! So there is a company that figured out how to make a better foam roller. You can see the types they have here. Their rollers have specific grooves that allows you to get the right massage pressure without aggravating the joints.

Overview of topics and the calendar for the Fall 2020 semester of 8.701 Nuclear and Particle Physics.

We encourage constructive comments and discussion on OCW’s YouTube and other social media channels. Personal attacks, hate speech, trolling, and inappropriate comments are not allowed and may be removed. More details at https://ocw.mit.edu/comments.