Are we at the cradle of a quantum age? Quantum computers constitute a radical new technology for performing complex calculations and computations with an efficiency so potentially vast that its impacts are scarcely imaginable to the majority of today’s coders and hardware developers.

Are we at the cradle of a quantum age?

Quantum computers constitute a radical new technology for performing complex calculations and computations with an efficiency so potentially vast that its impacts are scarcely imaginable to the majority of today’s coders and hardware developers. Sure, you may have heard this before.

Indeed, the advent of most truly substantial (and thus usually disruptive) categories of tech - from the abacus to the telegraph to the Internet to blockchain - tend to be accompanied by choirs of utopian and apocalyptic predictions.

Moreover, the manic novelty-thirsting pageantry of today’s globalized markets vests developers and branders with a wearying prerogative to frame every new thing as the most groundbreaking invention since the home console, the smartphone, or the Internet itself. Given the saturation of claims, even once-faithful attendees of the church of silicon innovation may compulsively tune away from another prophecy of cyber-doomsdays and Edens wrought by tomorrow’s gadgets.

So, we will begin our discussion by making the following clear: what quantum computing represents and portends is not just “faster hardware” and another wave of cool home tech, but likely the biggest paradigm shift in computational technology since its very emergence. To be fair, its impacts may still take a great deal of time to reach us, not unlike the Internet, which took decades to journey from Pentagon-funded labs to our living rooms, favorite coffee shops, and jean pockets. Nonetheless, it may be a useful and surprising exercise to recognize that much of what the Internet eventually became in the world could be very directly traced to the structures and capacities already in place during its sheltered “childhood”.

More than that, many of the Web’s specific applications were already being actively, if vaguely, envisioned early on. As such, long before Julian Assange first learned how to say “command prompt_”, and decades before dial up, chat-rooms, and the movie _Hackers, most of the foundations of and prerequisites for today’s online world already existed, and some of their radical applications, utilities, and contingencies quite foreseeable. In other words, barring the wild-card impact along the way from a few handfuls of visionary teams and minds, much of our online world’s destiny could be discerned by those standing next to its cradle.

Yet, just as a special recipe book is no true guarantee of a successful restaurant, the path from there to now was still filled with contingencies and surprises. And it’s likely that the history of quantum computing would hold no fewer of these. It should be fairly clear by now that we see an immanent parallels between these two paradigmal technologies. But that’s not the only reason for our extended Internet-centric preamble. Besides this nebulous analogical relation, the prospects of quantum computing also bear a far more direct and immanent significance to the early Internet, one which ties into the crux of our discussion. In short, the advent of quantum computing poses a direct and substantial threat to modern cryptography, which also happens to be the very backbone of the Internet as we know it, which will be the focus of this article. 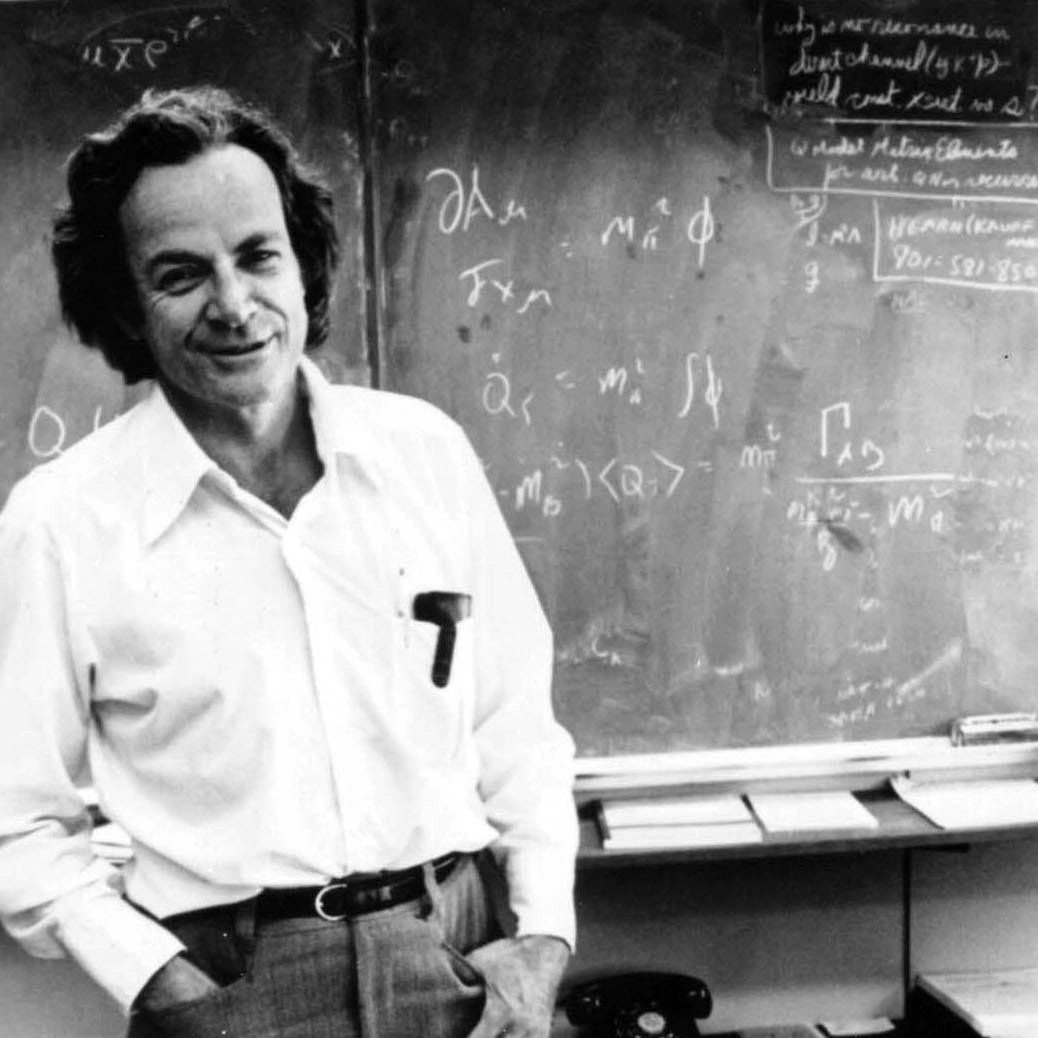 Pictured: Richard Feynman, a Caltech Physics professor of some renown who proposed the model of what we know today as a quantum computer.

Quantum computers present a radical new technology for performing complex calculations and computations that could shorten the length of time required to perform certain operations (such as factoring large numbers) from centuries down to seconds. Proposed by physicist Richard Feynman in 1981, a quantum computer exploits special physical properties - such as quantum entanglement, interference and superposition - to perform numerous computational operations simultaneously. While a normal Turing machine (a “classical computer”) can only perform one calculation at a time, a quantum Turing machine can perform many calculations at once. If this may seem like a minute distinction to a layperson just technical enough to recall the quad-core CPU in their smartphone, it may be useful to note that, given the operative distinction above, the workings of even the most powerful cell phone (or, for that matter, supercomputer) in the world are more similar to those of a calculator than of a quantum computer.

Though the quantum computers of today remain difficult and costly to engineer and, in regards to most computational tasks, would still lose out even to classical computers far beneath the current processing thresholds, the sheer potential opened up by the operative simultaneity of quantum computers extends incalculably further than the gradually broadening limits of classical computation.

With that being said, the persisting challenges of implementing quantum computing technology continue to defer these actualization prospects, which need not only be starry and utopian, but also enable certain unnerving contingencies. Moreover, some of these stem not from the potential computational efficiency of quantum machines, but from the sheer novelty of their operative principles, which may provide ways to undercut some of the most widespread digital security frameworks in use today. Granted, the scarcity and limitation of quantum technologies at this time make the present existence of practical quantum adversaries, at the very least, unlikely. Nonetheless, many of the methods that practical quantum computers would be able to leverage are already known and can be simulated on classical computers today or run in small scales on extant quantum computers.

As such it must be mentioned that unlike the early Internet, the first seeds of quantum development may already be germinating well outside of governmental, academic, and corporate labs. But if open-source democratization of developmental access may indeed aid in compacting the timeline and expanding the early scope of fruitfully implemented quantum technology, it may also enable or expedite the emergence of systemically destabilizing contingencies. Some of these contingencies are already well-foreseeable; namely, those associated with an impending emergence of quantum machines powerful enough to expediently implement algorithmic methods of undermining the most widespread cybersecurity frameworks used today.

Before we go into these methods and vulnerabilities, below is a primer on some terms used in the fields of quantum computing. If you are already familiar with these terms feel free to skip the rest of this section.

Entanglement: A physical phenomenon that occurs when a pair or group of particles is generated, interacts or shares spatial proximity in a way such that the quantum state of each particle cannot be described independently of the state of the others. A phenomenon which a bewildered Einstein referred to as “spooky action at a distance”, quantum entanglement constitutes one of nature’s most mystifying magic tricks: instantaneous correspondence (rather than causal transfer) of qualitative states.

Qubit: The basic unit of information used in a quantum computer. A qubit is distinct from a bit of information in that it can exist in a state of superposition between 0 and 1 simultaneously. Multiple qubits can be entangled with each other at once. Hence, when you perform an operation on one qubit, it could instantaneously perform operations on all the other qubits. With a multitude of qubits, this can translate into astronomical levels of computational power.

Quantum Volume: The Quantum Volume, QV, method quantifies the largest random circuit of equal width and depth that the computer successfully implements. It is formally defined as a single-number metric that can be measured using a concrete protocol on near-term quantum computers of modest size. Quantum computing systems with high-fidelity operations, high connectivity, large calibrated gate sets, and circuit rewriting toolchains are expected to have higher quantum volumes. This metric was developed by IBM and is the metric we will use throughout this article as distinct from the metric of the number of accessible qubits in order to state the computational power of quantum hardware.

The Evolution of The Public-Private Key Encryption in Blockchain Systems

There are many different methods to verify a user’s identification. Although the management of authentication and active sessions has come a long way, simple password authentication has not been able to provide sufficient security to support the rapid growth in data, advancements in mobile and cloud technologies, and increasing volumes of security breaches.Exposure of session data is only one example of where this authentication method can fall short