Irresistible Features for the Futures of Python 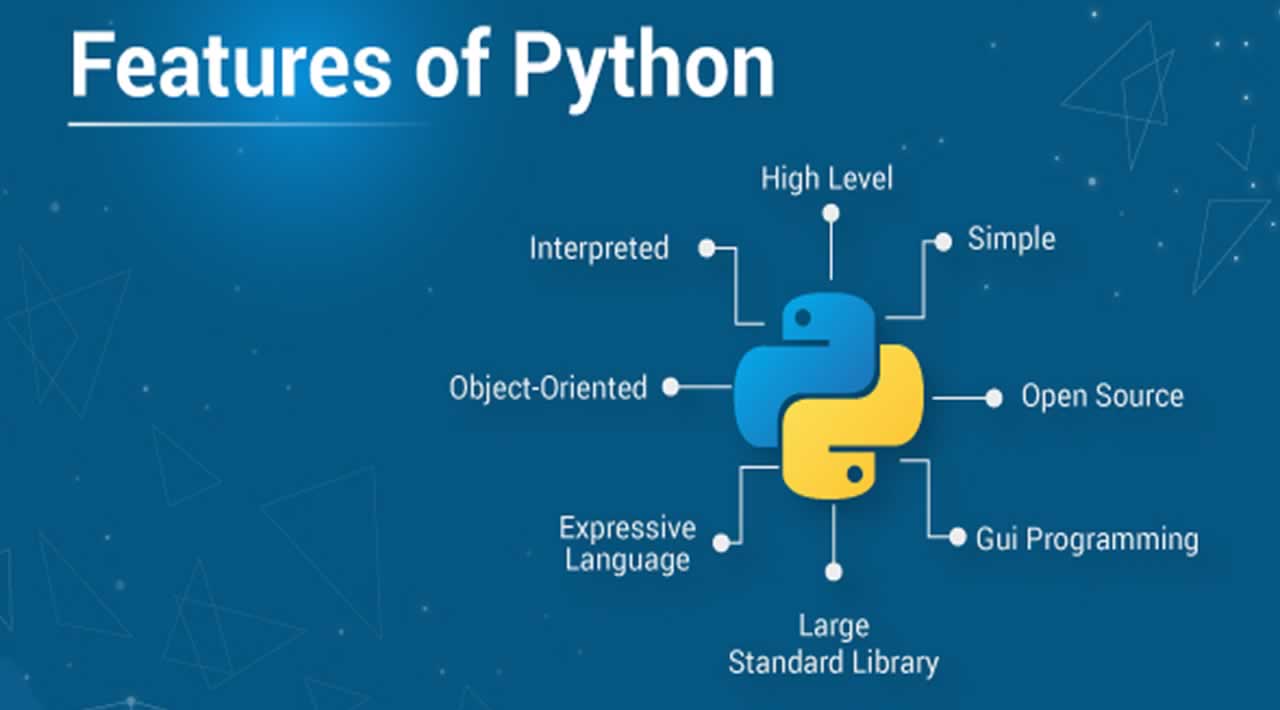 Let’s start with the Features of Python ...

Easy to read and easy to code

As we have seen in earlier lessons, Python is very easy to code. Compared to other popular languages like Java and C++, it is easier to code in Python. Anyone can learn Python syntax in just a few hours. Though sure, mastering Python requires learning about all its advanced concepts and packages and modules. That takes time. Thus, it is programmer-friendly.

Being a high-level language, Python code is quite like English. Looking at it, you can tell what the code is supposed to do. Also, since it is dynamically-typed, it mandates indentation. This aids readability.

We can easily download Python from its official link, where we can found all the previous releases. We can go with latest version, whether you know the previous versions or not.

Secondly, it is open-source. This means that its source code is available to the public. You can download it, change it, use it, and distribute it. This is called FLOSS(Free/Libre and Open Source Software). As the Python community, we’re all headed toward one goal- an ever-bettering Python.

There is no need to compile the code, likewise C++ and Java. So debugging becomes very easier than other programming languages.

The programmer does not have to learn the System Architecture for Python. There is not to worry about the memory management concept, it is the key feature of Python.

For any program we have different variables with different values. In that case, the Python language does not allow the user to define the type of the variables. It will automatically understand the variable type and returns the values.

Python code is written on the Windows operating system. If you want to run this same code on MacOS, in that case, it will run without any interruption because the system-dependent feature doesn't affect Python.

It is possible to write Python code in other programming languages.

Python language has large library where we can find unit-testing, CGI, image manipulation, databases, regular expressions, and many other in-built functions and methods. So we don’t need to code for apply functionalities to the program.

wxPython or JPython these toolkits are used to perform GUI programming. These are very easy to implement and fast development methods.

There are major frameworks used for web applications, such as Django, Pyramid, and Flask.

For data science, if we have to perform Data Analysis then use the Pandas framework. To implement Data Visualization Metplotlib, seaborn libraries are used. For any Numeric and Scientific Calculations, the Numpy framework is used. For Machine Learning, the Scikit-learn is used. As a library, machine, and deep learning-TensorFlow, Keras frameworks are used. These frameworks and libraries are used for Data Science in Python.

For Deep learning, the Keras library is used. For any Deep learning framework, the Microsoft Cognitive Toolkit is implemented. OpenCV-Open source computer vision is used as library; NLTK- Natural Language Toolkit. These Python Libraries are used for AI.

Python is a very popular language, from school kids to the advanced programmer. As we have discussed, it’s easy to learn and compared to other programming languages. It's simple and advanced. If we are focusing on future technologies, we reach for some of the words like Data Science, AI, IoT, Machine Learning, Automation, and these are all the major features that increase the demand for the Python language for newcomers as well as experts. Python has a future and is followed by a huge community in the tech world.

The following image will give us a quick overlook at the demand for Python.

“Money matters a lot.” For the current scenario of the programmer as well as considered about future Python becomes the first choice while thinking about actual growth, careers and jobs. Data science with Python reaches to the new place in the upcoming future. In this data-driven world, Python starts with data analysis to automation. "The new trend is Python."

How to learn Python?

There are major 7 steps:

Benefits and Drawbacks of Python

All the features are themselves the benefits of Python.

Compared to other programming languages

Now that you know what are the features of python, you know what makes it special. In this tutorial, we learned about various features of Python. We saw that it is interpreted, dynamically-typed, and object-oriented, among other python features. It is also portable, free, and easy. Now that’s some motivation to dive into the world of Python.

If you have any queries regarding Python features article, mention in the comment section. We will be happy to help you!

Description
Become a Python Programmer and learn one of employer's most requested skills of 21st century!

We will start by helping you get Python installed on your computer, regardless of your operating system, whether its Linux, MacOS, or Windows, we've got you covered!

Description
A Note on the Python versions 2 and 3: The code-alongs in this class all use Python 2.7. Source code (with copious amounts of comments) is attached as a resource with all the code-alongs. The source code has been provided for both Python 2 and Python 3 wherever possible.

Introductory Python: Functional language constructs; Python syntax; Lists, dictionaries, functions and function objects; Lambda functions; iterators, exceptions and file-handling
Database operations: Just as much database knowledge as you need to do data manipulation in Python
Auto-generating spreadsheets: Kill the drudgery of reporting tasks with xlsxwriter; automated reports that combine database operations with spreadsheet auto-generation
Text processing and NLP: Python’s powerful tools for text processing - nltk and others.
Website scraping using Beautiful Soup: Scrapers for the New York Times and Washington Post
Machine Learning : Use sk-learn to apply machine learning techniques like KMeans clustering
Hundreds of lines of code with hundreds of lines of comments
Drill #1: Download a zip file from the National Stock Exchange of India; unzip and process to find the 3 most actively traded securities for the day
Drill #2: Store stock-exchange time-series data for 3 years in a database. On-demand, generate a report with a time-series for a given stock ticker
Drill #3: Scrape a news article URL and auto-summarize into 3 sentences
Drill #4: Scrape newspapers and a blog and apply several machine learning techniques - classification and clustering to these
Using discussion forums

Please use the discussion forums on this course to engage with other students and to help each other out. Unfortunately, much as we would like to, it is not possible for us at Loonycorn to respond to individual questions from students:-(

The only way to keep our prices this low is to NOT offer additional technical support over email or in-person. The truth is, direct support is hugely expensive and just does not scale.

We understand that this is not ideal and that a lot of students might benefit from this additional support. Hiring resources for additional support would make our offering much more expensive, thus defeating our original purpose.

It is a hard trade-off.

Thank you for your patience and understanding!

Yep! Folks with zero programming experience looking to learn a new skill
Machine Learning and Language Processing folks looking to apply concepts in a full-fledged programming language
Yep! Computer Science students or software engineers with no experience in Java, but experience in Python, C++ or even C#. You might need to skip over some bits, but in general the class will still have new learning to offer you :-)
Basic knowledge
No prior programming experience is needed :-)
The course will use a Python IDE (integrated development environment) called iPython from Anaconda. We will go through a step-by-step procedure on downloading and installing this IDE.
What will you learn
Pick up programming even if you have NO programming experience at all
Write Python programs of moderate complexity
Perform complicated text processing - splitting articles into sentences and words and doing things with them
Work with files, including creating Excel spreadsheets and working with zip files
Apply simple machine learning and natural language processing concepts such as classification, clustering and summarization
Understand Object-Oriented Programming in a Python context