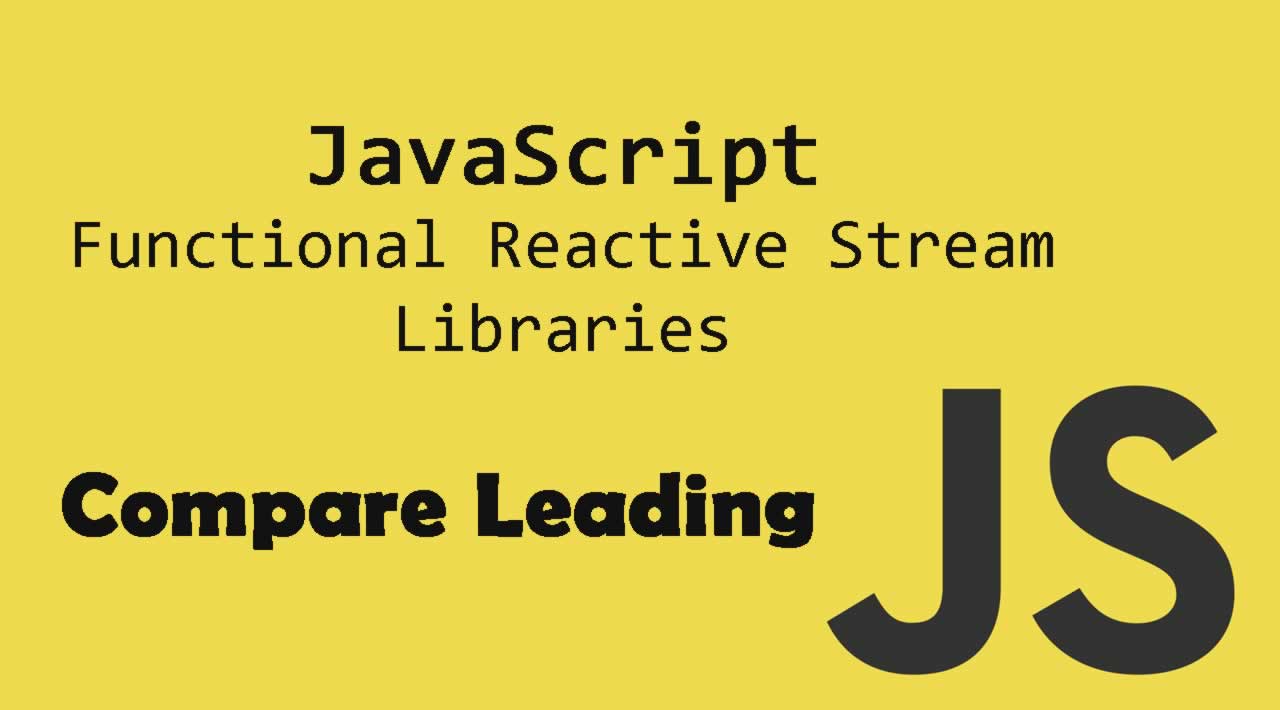 At the foundation of every reactive programming application stands a library that offers data structures and operators to compose the data flow that models the solution. These libraries, often called streaming libraries, are characterized by different factors. Let’s see some of them.

At the foundation of every reactive programming application stands a library that offers data structures and operators to compose the data flow that models the solution.

These libraries, often called streaming libraries, are characterized by different factors. Let’s see some of them.

In push-based behavior, the program graph is ready and constantly listening to new input data. This is, for example, the case with an event listener on a DOM element: the relative callback runs when a new input event occurs.

By contrast, with a pull-based input, it is read when needed. This usually happens for continuous changing values, for example, when we call a function that returns the current time.

Functional reactive libraries are usually focused on push but there are experiments to expand to support pull. (See, for example, hareactive behavior [2] and Xstream signals [3].)

Reactive libraries offer the basis to compose our application business graph. When the graph starts running the input data, producers get connected and listen for input events.

Here come two flavors. The stream is defined as cold if the data producer is created inside the stream when a listener is added to it (or to a dependent stream). This usually means the stream is by default unicast and that every attached listener gets a different producer instantiation.

We call them hot streams when the producer is created outside the stream. This case is usually multicast, many streams can listen to the same shared data source. For more explanation, I forward you to Dave Sexton article about hot/cold observables [4].

As said, the base functionality of the reactive library is to implement the application data graph that reacts to input data and produces the desired output over time.

The time concept can be explicitly represented by input data push time and function calling order. Or, in a more implicit way, creating for every input data a tuple that associates it with a time number.

After the application graph is declared and instantiated, it is necessary to call a method to start observing for input events.

There are two kinds of strategies. Sync startup, usually happens to call an addListener method on a stream. The method synchronously runs the network backward, creating and observing the input sources when reaching them.

Usually, in an application with sync startup, we’ll find many invocations of the addListener method at different time points when the application needs to observe new sources.

In async startup, usually, we have a single run effect function call per application. All streams (existing and future) merge/compose down to this single final stream. This start method is usually asynchronous and all streams wait for processing input events until the whole network has warmed up.

Probably the most mature and most used reactive lib in the JavaScript ecosystem.

XStream: King of the Cycle

Born to better address Cycle.js functional specific requirements, it can be considered a lite and opinionated version of RxJS from André Staltz.

The new incarnation of the monadic stream toolkit for FRP from Brian Cavalier.

For benchmarking, a simple graph network was replicated with the three libraries.

Each version was implemented in a separated ES6 module. For every input impulse, the network generates a list of to-do items. Every item has a copy of an old item (the old item is updated with every four elements).

The network is very simple but uses some of the principal operators of the three libs.

Another peculiarity of the network is the presence of a “diamond”. Diamond flows are not recommended and can cause glitches in the execution. In the demo, the diamond was voluntarily introduced to compare how the three libs react.

In short, Most, with its explicit time representation and the async startup was the most intuitive and glitch-resistant. For the other two libs, it was necessary to force an async behavior, adding a setTimeout to have the diamond network work as expected.

Let’s see the core of the three versions plus an imperative traditional version:

Benchmark.js was used to compare the three library’s speeds. 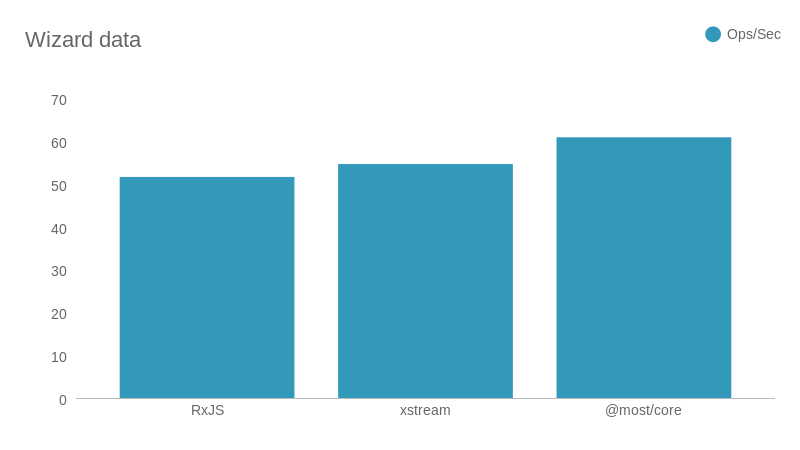 All three libs are very performant. Most/core was the winner with the best ops/sec value.

Memory management is equally important, if not more, than speed. In real-world applications, we are going to have hundreds of thousands of stream nodes. Correct and efficient memory management will be fundamental.

To measure memory pressure, Node was started with an exposed garbage collector API and the Airbnb Memwatch library was used to trace heap usage.

The libs were compared even against an imperative mutating “traditional” version of the algorithm.

Two different tests were done. One recursive and one based on promises. 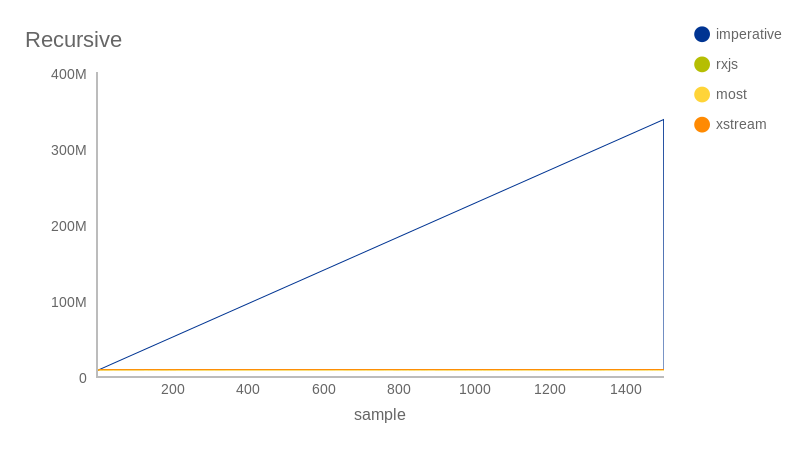 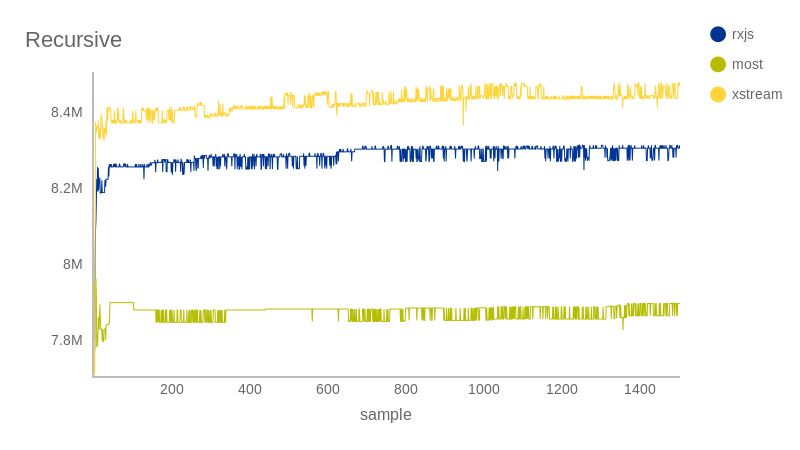 The imperative version was unable to unload memory between recursive iterations. Removing the imperative, we see that @most/core is the better one. Using promises, the imperative gets its revenge with optimal memory usage. @most/core is still the best among the three stream libs but with more deviations, XStream is the more expensive but more linear with fever spikes.

Three of the major functional reactive programming streaming JavaScript libraries were tested for speed and memory usage on Node.js.

All three libraries are very performant on speed and efficient on memory usage.

@most/core has been identified as the best in speed and the more efficient for memory usage. Moreover, explicit time representation and always async startup help prevent glitches and have an easy to understand and predictable data flow.

The mystic term of Functional Programming (FP) must be familiar to any JS developer. The first impression when we say “JS supports functional programming paradigm”.

In this post, I will explain why declarative code is better than imperative code. Then I will list some techniques to convert imperative JavaScript to a declarative one in common situations.