Creating a Cubic Spline in Python and Alteryx 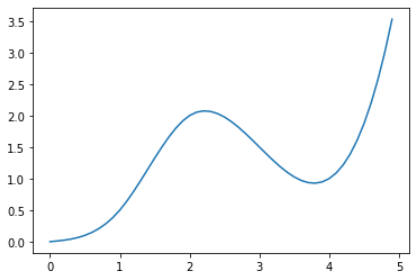 In this post, we work through building up a cubic spline from first principles first in Python, and then converting the Python code into an Alteryx macro. As a bit of a thought experiment, I wondered how hard it would be to create a cubic spline interpolation within Alteryx.

As a bit of a thought experiment, I wondered how hard it would be to create a cubic spline interpolation within Alteryx. As with many of my experiments BaseA rules apply.

Stealing an idea from Tasha Alfano, I thought I would do it in both Python and Alteryx from first principles. A quick shout out to MathAPI - a handy site and used to render all the LaTeX to SVG.

So let’s start by reviewing how to create a cubic spline and then build it up. I chose to use the algorithm as described in Wikiversity. Specifically with type II simple boundary conditions. I’m not going through the maths but will define the steps to build the spline.

Building a Tridiagonal Matrix and Vector

First, step is given an X array and a Y array of equal length n (greater than 2), we want to build a tridiagonal matrix which we will then solve to produce the coefficients for the piece-wise spline. The goal of the spline is that it hits every point (x, y) and that the first and second derivatives match at these points too.

Sticking with notation in the paper, lets define H to be an n-1 length array of the differences in X:

A tridiagonal matrix is a square matrix where all values except for the main diagonal and first diagonals below and above this. For example: