Following up on the first part of Java Enterprise 101, this time around we will get our hands dirty and implement the JEE stack with the help of Spring.

Setting up the project

We start... well, at the start. At start.spring.io to be precise. This URL will lead you to the Spring Initializr - a handy little website where you can mix and match libraries and packages to suit your project. In our case, we want to have the Web, JPA and H2 packages:

I also changed the project name from "com.example" to "org.example" as well as the project type from Maven to Gradle. You can also use Maven perfectly fine, but for this guide I will be using Gradle. Once you hit the "generate project" button, you will end up with a *.zip file. Unpack it to a directory of your choice; this will become our project directory. Inside, you will find:

Let's have a look at the generated build.gradle script, shall we?

As far as buildscripts go, this is actually quite readable. It first says that it uses the spring-boot-gradle-plugin and the Maven Central repository for fetching its dependencies. Not really surprising, is it?

In the next section we have a list of gradle plugins which are applied to our project. Feel free to replace the eclipse plugin with the plugin for your IDE instead (e.g. idea for IntelliJ users). If you stick to editor and command line, you don’t need this at all.

In my version, I changed the sourceCompatibility to 1.10 so I can use the var keyword from Java 10. The build script also mentions the maven coordinates of our project. Be a good citizen and always stick to semantic versioning (SemVer)! In the final section, we see a list of our dependencies, both for compiling and for testing our project.

In order to make this buildscript work properly with Java 9 and higher (modularized Java platform libs) you also need to add the following dependency:

We are not going to actually use JAXB, but you will get a NoClassDefFoundError if you are missing this dependency. Hopefully, the Spring Boot Team will add it to their starter packs in the near future.

The Spring Boot Starter packages are “meta-packages” which contain an opinionated selection of libraries for common tasks. For example:

That’s nice, but what if you don’t agree with the choices of the Spring Boot team? Don’t worry, they’ve got you covered. If Spring Boot detects the presence of another library, say TestNG, this library will automatically take precedence over the default. In many cases, you don’t even have to configure anything manually to make this happen; just add the dependency in gradle and rebuild the project. If you want some more exotic alternatives that Spring doesn’t recognize, you will have to do a little bit more work, but that’s for another article. For now, let’s make use of what we get out of the box.

First of all, you should verify that your setup is working as intended. The best way to do so is to open a command prompt (yes, even windows cmdwill do…) and navigate to your project folder (where build.gradle is located). Run the following command:

Under windows cmd, you might need to use gradlew.bat instead. Anyways, this will:

“But we ain’t got no tests!” you say? Well, Spring Initializr always includes one particular test case that may seem a little odd at first sight, but actually makes a lot of sense. Open up the file DemoApplicationTests.java (if you called your app something other than Demo, replace it accordingly).

This test does exactly what the name implies: it asserts that the Spring context loads up correctly. If this basic test fails, it means that you have a severe issue with your Spring / Spring Boot Setup that needs to be sorted out before continuing on. We should be okay with our setup now.

The other class that is generated by the Spring Initializr for you is the DemoApplication.java class:

This is your main class, the entry point into your server-side application.

The package in which this class resides is considered to be the root package by Spring Boot. Make sure that all of your source code either resides in the root package, or one of its (direct or indirect) child packages, otherwise Spring Boot will not be able to locate your classes.

Ready to write some actual code? Create a Java file and place it in your root package (or a sub-package). I place mine in org.example.demo.rest:

There you go. That’s all it takes to build a REST endpoint with Spring Boot. The @RestController annotation tells Spring Boot what to do with this class (later on in this tutorial series we wil see other examples as well). The method sayHello (the name does not matter in the slightest, as long as it is a valid Java identifier you can name it whatever you like) implements a REST endpoint. The @RequestMapping provides the information to Spring which incoming requests to route to this endpoint. In this case, we bind it to the resource path /api/hello-world and to the request method GET. With @ResponseBody, we tell Spring that this method produces a result that should be returned to the client as the body of the HTML response.

Now for the really awesome part. Go to your command line interface again and navigate to your project folder (if you haven’t done so already). Run the gradlew build command once more. Upon success, navigate to the build/libs sub-directory. In there, you will find a single .jar file. Run this file with java as you normally would:

This will start up your application server for you. Wait, what? But we did not even install a Tomcat yet! The funny thing is: you don’t need to. While you can deploy your Java Enterprise application now in the “traditional” way as a war file, you can also run it as a regular java application, because the application container is alreay embedded in your application. Once it has finished starting up, open up a web browser and navigate to:

You should see our “Hello World!” message showing up.

We wouldn’t be much of a developer in 2018 if we didn’t write proper tests, now would we? Luckily, Spring makes it relatively easy for us to test our REST endpoints. However, some setup is required. I will expand our existing test class for simplicities sake (and omit the existing test case in the following listings). Here’s the setup code we need:

This helps us to set up the MockMVC helper. There is a lot more to this class than it initially appears to be; we will explore in another tutorial why exactly this class is so awesome for testing Spring REST endpoints. For now, just consider it a nifty helper to formulate a REST request. Note that the set up code above can be moved to a testing base class; it’s never going to change, and there is no need to repeat it in every test class. Let’s have a look at the code in more detail.

@Autowired is the dependency injection annotation used by Spring, very similar to @Inject used by JSR 330 implementations (e.g. Google Guice). With this, we basically tell Spring to pass in the single WebApplicationContext instance to our test. We then use JUnit’s @Beforemethod to set up our MockMvc instance using our web context. That is how the MockMvc instance “finds” your endpoints.

Now, let’s write an actual test for our REST endpoint:

This internal DSL allows us to perform the get request and we expect the HTTP status code to be ok, and we return the response content as a String. This reads like prose. Compiler-checked prose that reduces dozens of lines with assertions into a single line. If that isn’t beautiful, I don’t know what is.

Run this test and watch it pass! You can either do it in the command line with

… (this runs all tests) or directly in your IDE.

This has become quite a long article - a lot longer than I intended. However, if we consider how many lines of actual code we actually wrote (about 10?) it is hard to argue that Java is “such a verbose language”, considering what we achieved in terms of functionality. We also have the foundations in place to extend our server with a data model and a database connection in the next article. We literally merely scratched the surface. Brevity aside, the true advantages of Spring Boot and the JEE architecture are not yet visible. Bear with me for now please ;)

☞ Spring Boot and OAuth2: Getting the Authorization Code

☞ An Introduction to Spring Boot

☞ Spring Boot vs. Spring MVC vs. Spring: How Do They Compare? 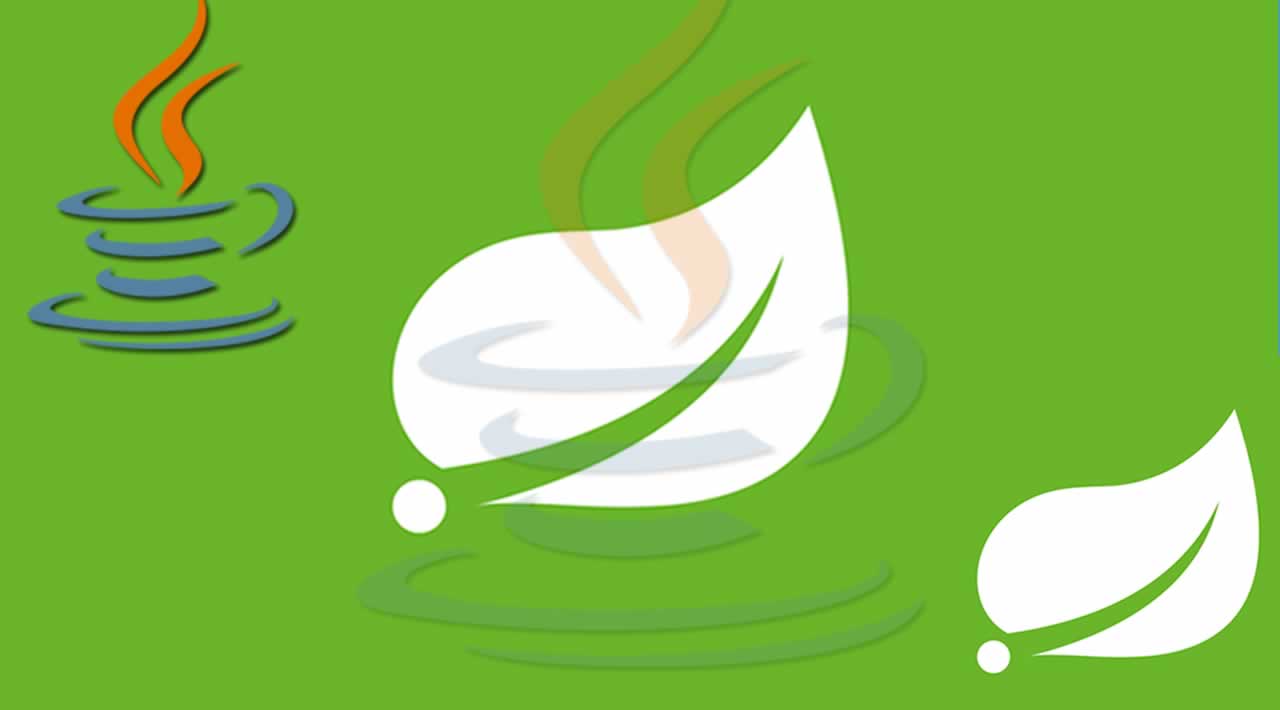 40 Spring questions and answers to prepare for your next interview.

The Spring framework makes J2EE (Java 2 Platform Enterprise Edition) development easier and is used to create testable, high performing, reusable code. Spring is commonly applied in the information technologies and financial sector due to its modularity and dependency injection features.

Financial technology is an exciting and evolving field for developers who want to work at companies like MIT, Accenture, or Visa, which prefer Spring over Java EE. These companies are looking for developers like you with Spring Framework experience to help digitize their enterprise needs.

But, how do you know if you’re ready for an interview? And how do you prepare?

Today, we’ll go through a study guide of the top 40 Spring interview questions to make sure you’re ready to ace your Spring Framework interview.

Here over this article, we are discussing different REST specific annotations in Spring.

We can annotate classic controllers with the _@Controller_ annotation. This is simply a specialization of the _@Component_ class, which allows us to auto-detect implementation classes through classpath scanning.

We typically use @Controller_ it in combination with an _@RequestMapping_ annotation for request handling methods_.

A REST API is an intermediary Application Programming Interface that enables two applications to communicate with each other over HTTP, much like how servers communicate to browsers.

RESTful is the most common approach for building web services because of how easy it is to learn and build.

Let’s say you order something from a fast-food restaurant and the cashier requests the information needed from you to process your order. After it’s been processed, they hand you the order you requested for. This transaction is a real-life example of how REST API works.

In this tutorial, we’ll go over how to build a REST API in Java with Spring Boot. It’ll accept POST and GET request payloads to view and add entries from an entity - User. Configuring log4j2 is really quick and simple; this tutorial video explains the entire process in only 5 minutes, while you wait for your coffee to brew.

In the video below, we take a closer look at the How to configure log4j2 in the Spring boot application using log4j2.xml? | Spring Boot logging. Let’s get started!