In a project I had to create something similar to a syntax highlighter for a Blazor application. The code takes a string and highlights some parts of it. So, the idea is to create a component which outputs a raw html fragment that uses  text to colorize some parts of the string. Also, it should use CSS isolation as the style is specific to the component.

I've already written about these 2 subjects independently. In this post we'll see how to use them together! 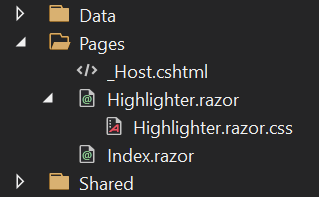