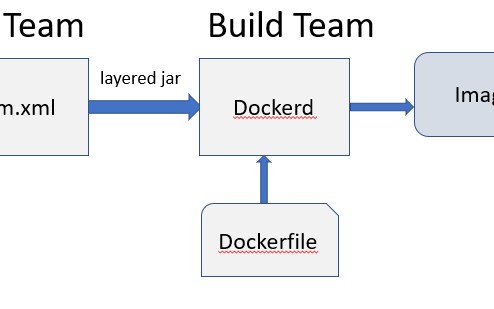 This article looks at two common options for Dockerizing Spring Boot applications. We will use a simple REST application as a running example.

Microservices are often built with the Spring Boot framework and deployed with Docker. This paper looks at two common options for Dockerizing Spring Boot applications. Throughout we will use a simple REST application as a running example.

We build this into a fat jar in the target directory. The simplest way to Dockerize it is to stuff the fat jar into a container:

This turns out to be a very bad idea. To see why recall that every instruction of the Docker file creates a layer in the image. In this case, our application and all its dependencies are put in one layer. If we keep changing the application then the image is rebuilt from scratch every time even though the dependency jars rarely change. This leads to slow builds.

In this tutorial, you will learn to build your first REST API web application with Java 11, Spring 5 and Spring Boot 2.2. We'll also use NetBeans 11 as the IDE.

Spring Boot Tutorials | Full Course - What is Spring? Spring Boot is an open source Java-based framework used to create a Micro Service. Spring Boot contains a comprehensive infrastructure support for developing a micro service and enables you to develop enterprise-ready applications that you can “just run”.

Kubernetes Tutorial For Beginners with Java and Spring Boot

Build Spring Boot Microservice application on Docker - Learn about the benefits of Docker containers for deploying Spring Boot microservices and how to get started with a simple Spring Boot app.