Node 12 - What Are The New Improvements And Features? 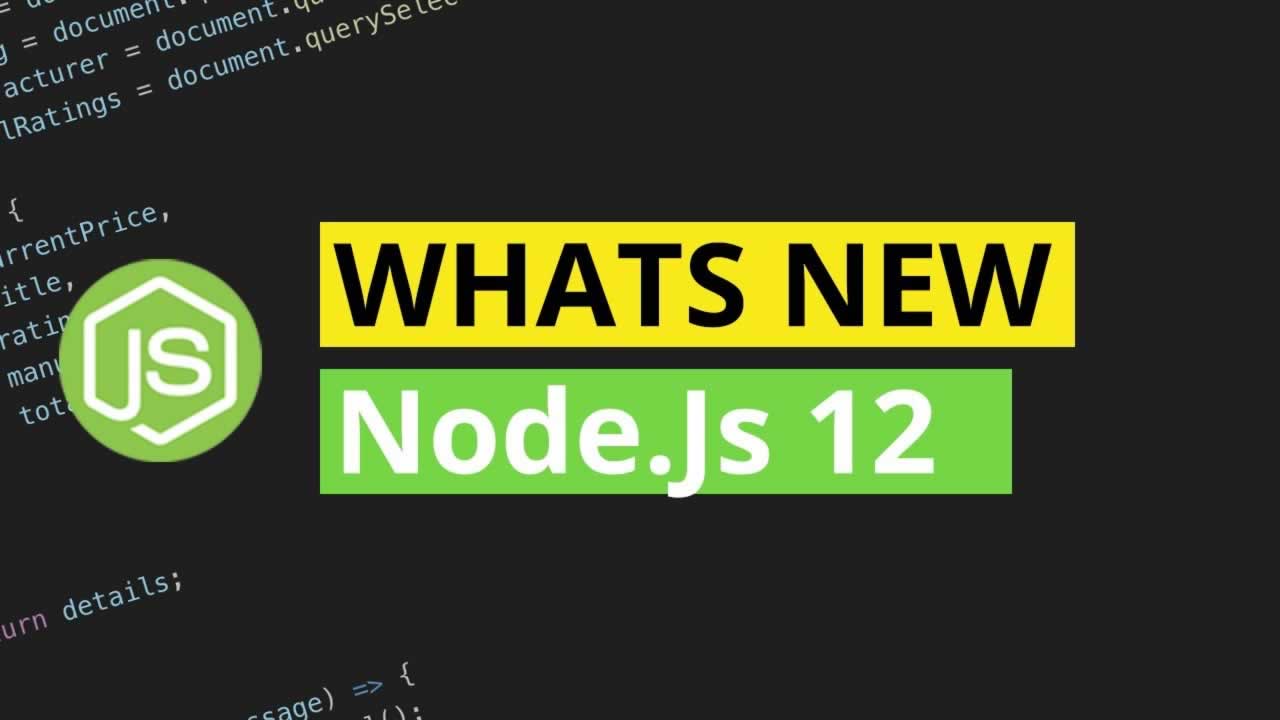 Node team added some great features in their v 12 which will definitely help the Node.js Developmentprocess and some features like planning to include Python 3 support, improving startup performance, Core Promise API support, further work on standards and governance

Node has released it's version 12 in late April (codename Erbium) which brings improved support for ECMAScript modules. It implements phase 2 of the plan that was released late last year as it's Node v12 (this is as even-numbered version) which comes under Long term support start from October 2019 & will get support till 2022 it also packed with V8 engine which is maintained by Google so will receive updates in future as well.

As always a new version of the V8 JavaScript engine brings performance tweaks and improvements to Node. It was initially running on V8 .7.2 (updated in Dec 18) and eventually upgrade to 7.6 in April which included notable improvements with V8 7.4 are performance updates for faster JavaScript execution, better memory management, and broadened ECMAScript syntax support.

WebAssembly Threads/Atomics are now enabled on non-Android operating systems which unlocks the usage of multiple cores on a user’s machine via WebAssembly, enabling new, computation-heavy use cases on the web.

Check out More of the v8.7.4 New Features Below:

The import/export syntax has become the favorite module syntax for developers since its standardization in ES6, and the Node team has been working on it to enable natively. Mostly all major browsers support ECMAScript modules via

Types of import from ES modules files for phase 3 that will work with all built-in Node packages:

Phase 3 for ECAM Script Modules in Node 12 which correspond to a path to the stability of the modules and the plan is to remove the --experimental-modules flag into LTS version.

Node V 12 has shipped with private class fields These variables are only accessible within the class itself and can't be accessed externally & if you try to access it outside of the class, you will receive a syntax error and private class field is initialized with the # symbol.

Node.js 12 feature brings an updated experimental version of support for ES6 modules. It will generate the code cache for built-in libraries before build time and embed it as a binary. The main thread is able to use this code cache and gives a 30% speedup in startup time for the main thread.

Node 12 takes the full advantage of newer compiler optimizations and security enhancements. The codebase requires a minimum of GCC 6 and glibc 2.17 on platforms other than macOS and Windows. The increment in minimum compiler and libc requirements also increments minimums in supported platforms. Node binary uses a new toolchain minimum which provides compile-time performance and security enhancements. Windows minimums remain the same as Node.js version 11, requiring at least Windows 7, 2008 R2 or 2012 R2 and a minimum compiler of Visual Studio 2017 and Mac users needing to compile Node will require a minimum of Xcode 8.

Node added TLS 1.3 support which increases security and reduced the latency. TLS has been a major update and it actively being integrated across the web. TLS 1.0 and 1.1 have been disabled by default, and the crypto library has removed deprecated functions. With TLS 1.3, Node.js apps have increased end-user privacy & also improved the performance of requests by reducing the time required for the HTTPS handshake.

Node.js 12 brings integrated heap dump capability out of the box. Previously the default V8 heap sizes were 700MB for 32-bit systems & 1400MB for 64-bit systems, Now it will automatically determine the heap size that it does not use more than the allowed resources.

Node.js 12 includes an experimental feature named Diagnostic report that allows developers to create a report on demand that will be triggered by specific events.

☞ Learn how to CI/CD with GitHub Actions and Docker

☞ Creating a REST API with Node, Express and MongoDB