Python Logging: An In-Depth Tutorial - The Python logging module comes with the standard library and provides basic logging features. By setting it up correctly, a log message can

As applications become more complex, having good logs can be very useful, not only when debugging but also to provide insight for application issues/performance.

The Python standard library comes with a logging module that provides most of the basic logging features. By setting it up correctly, a log message can bring a lot of useful information about when and where the log is fired as well as the log context, such as the running process/thread.

Despite the advantages, the logging module is often overlooked as it takes some time to set up properly and, although complete, in my opinion, the official logging doc at https://docs.python.org/3/library/logging.html does not really give logging best practices or highlight some logging surprises.

This Python logging tutorial is not meant to be a complete document on the logging module but rather a “getting started” guide that introduces some logging concepts as well as some “gotchas” to watch out for. The post will end with best practices and contain some pointers to more advanced logging topics.

Please note that all code snippets in the post suppose that you have already imported the logging module:

This section gives an overview on some concepts that are often encountered in the logging module.

There are six log levels in Python; each level is associated with an integer that indicates the log severity: NOTSET=0, DEBUG=10, INFO=20, WARN=30, ERROR=40, and CRITICAL=50. 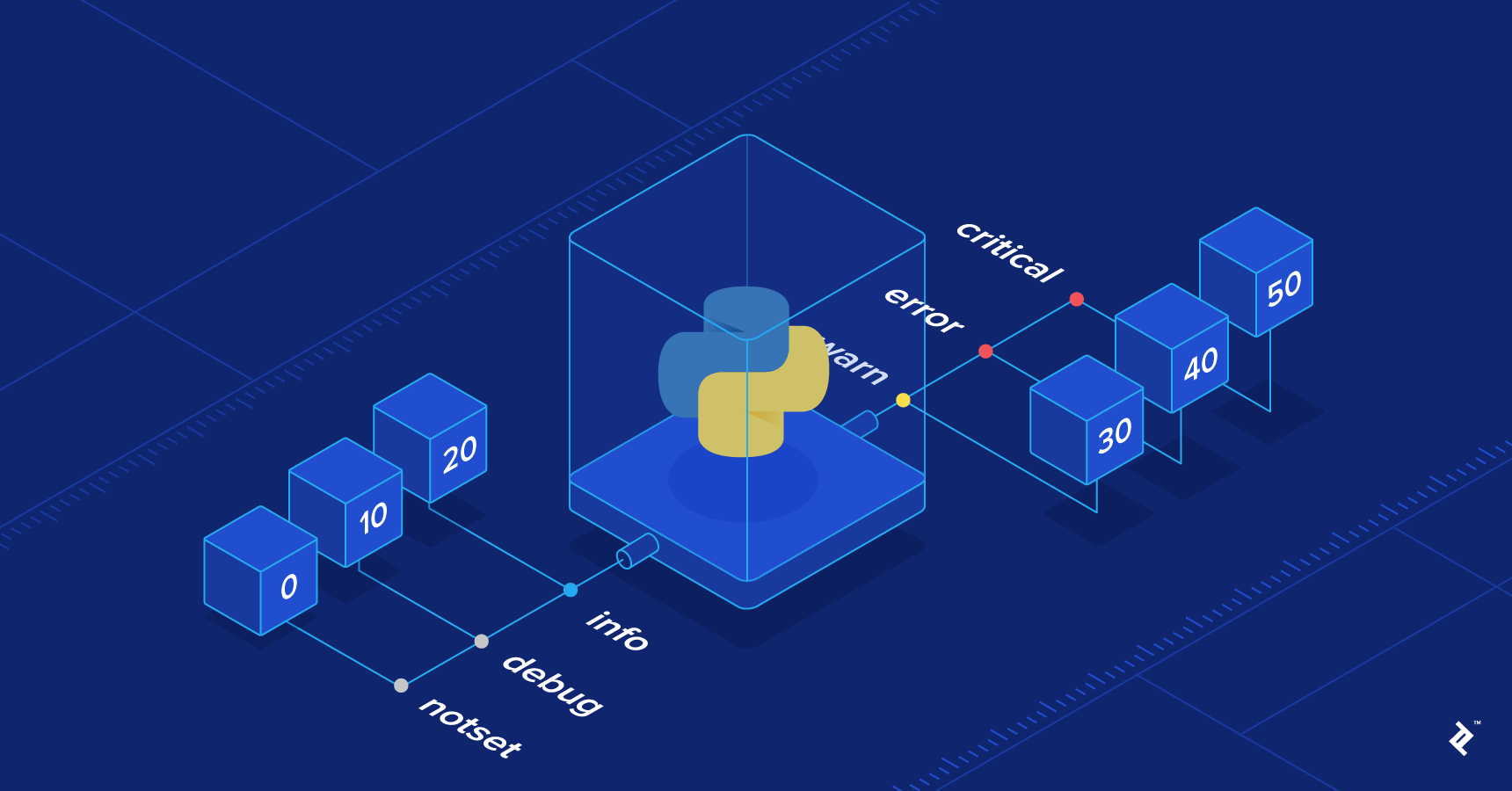 All the levels are rather straightforward (DEBUG < INFO < WARN ) except NOTSET, whose particularity will be addressed next.

The log formatter basically enriches a log message by adding context information to it. It can be useful to know when the log is sent, where (Python file, line number, method, etc.), and additional context such as the thread and process (can be extremely useful when debugging a multithreaded application). 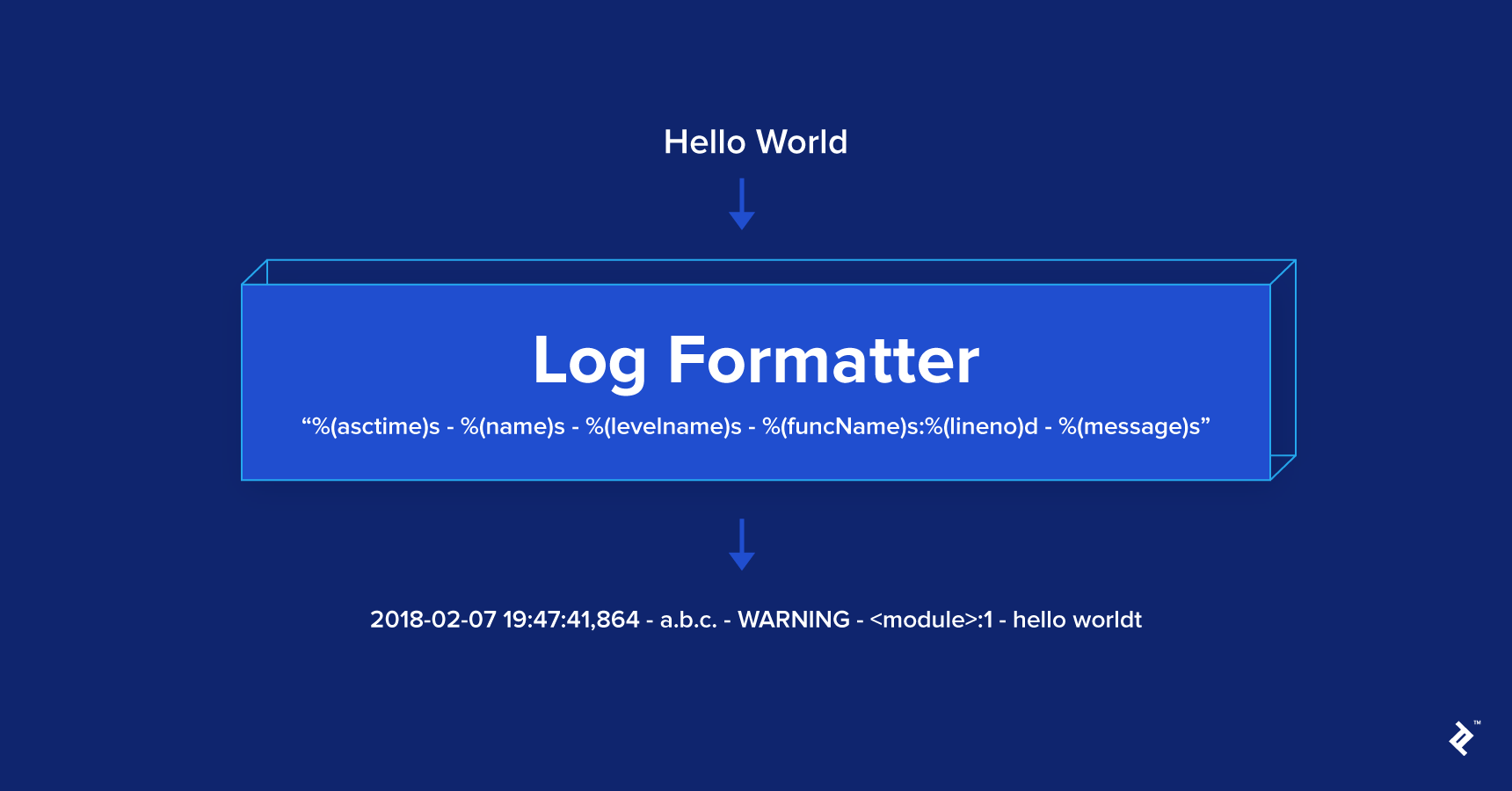 The log handler is the component that effectively writes/displays a log: Display it in the console (via StreamHandler), in a file (via FileHandler), or even by sending you an email via SMTPHandler, etc. 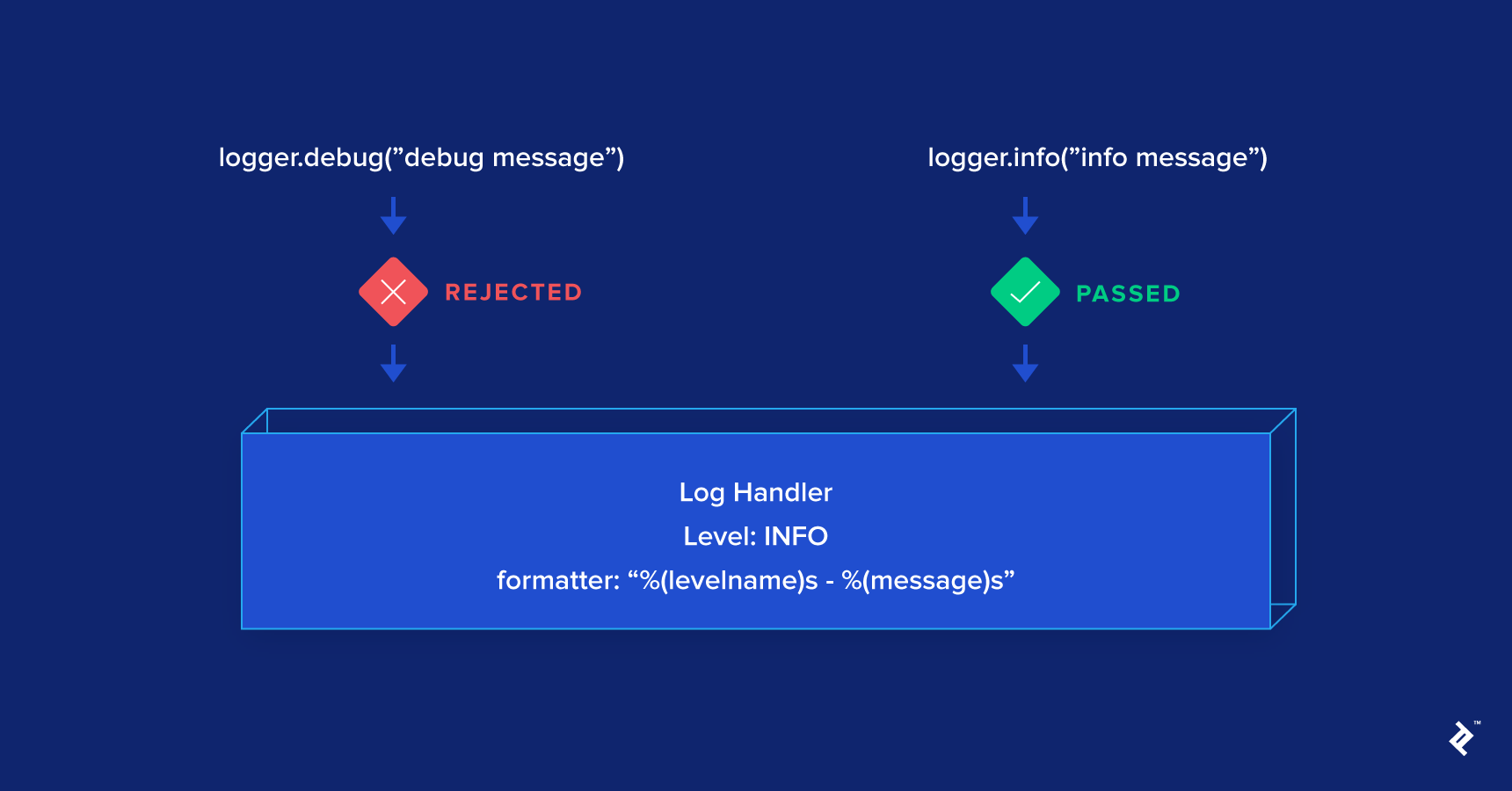 The standard library provides a handful of handlers that should be enough for common use cases: https://docs.python.org/3/library/logging.handlers.html#module-logging.handlers. The most common ones are StreamHandler and FileHandler:

Logger is probably the one that will be used directly the most often in the code and which is also the most complicated. A new logger can be obtained by:

A logger has three main fields: 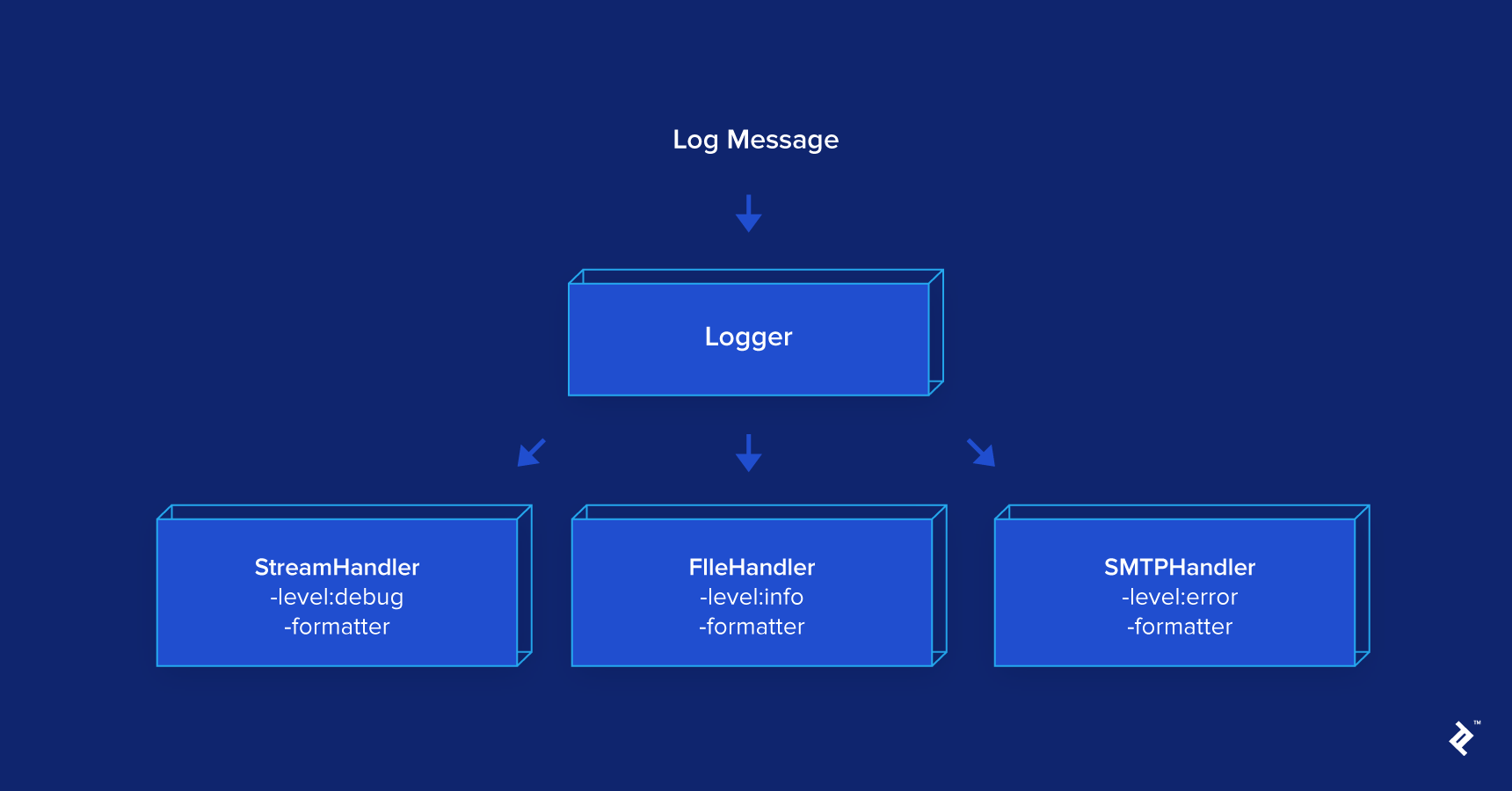 A logger is unique by name, meaning that if a logger with the name “toto” has been created, the consequent calls of logging.getLogger("toto") will return the same object:

As you might have guessed, loggers have a hierarchy. On top of the hierarchy is the root logger, which can be accessed via logging.root. This logger is called when methods like logging.debug() is used. By default, the root log level is WARN, so every log with lower level (for example via logging.info("info")) will be ignored. Another particularity of the root logger is that its default handler will be created the first time a log with a level greater than WARN is logged. Using the root logger directly or indirectly via methods like logging.debug() is generally not recommended.

By default, when a new logger is created, its parent will be set to the root logger:

However, the logger uses the “dot notation,” meaning that a logger with the name “a.b” will be the child of the logger “a.” However, this is only true if the logger “a” has been created, otherwise “ab” parent is still the root.

By default, the logger level will be used to decide of the a log passes: If the log level is lower than logger level, the log will be ignored.

The logging module is indeed very handy, but it contains some quirks that can cause long hours of headache for even the best Python developers. Here are the best practices for using this module in my opinion:

After you can create a new logger and use it: 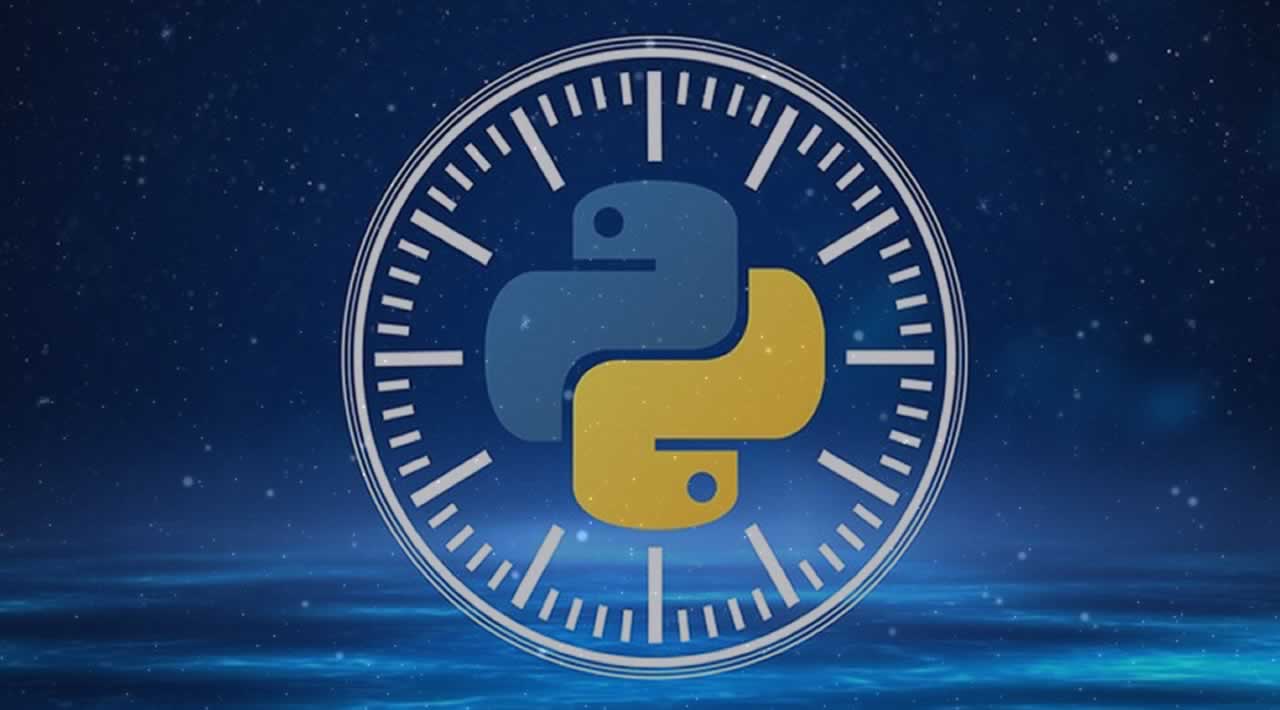