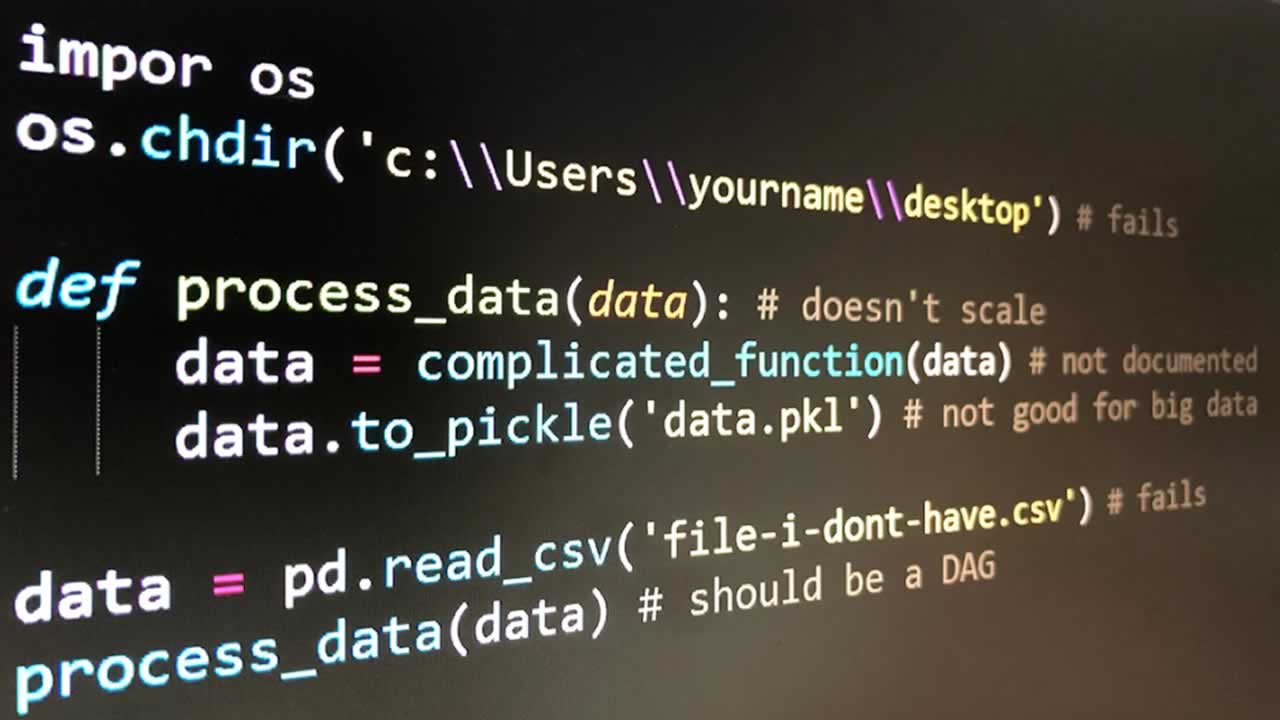 Data science needs code AND data. So for someone else to be able to reproduce your results, they need to have access to the data. Seems basic but a lot of people forget to share the data with their code.

Solution: Use d6tpipe to share data files with your code or upload to S3/web/google drive etc or save to a database so the recipient can retrieve files (but don’t add them to git, see below).

Similar to mistake 1, if you hardcode paths others don’t have access to, they can’t run your code and have to look in lots of places to manually change paths. Booo!

Since data science code needs data why not dump it in the same directory? And while you are at it, save images, reports and other junk there too. Yikes, what a mess!

Solution: Organize your directory into categories, like data, reports, code etc. See Cookiecutter Data Science or d6tflow project templates and use tools mentioned in #1 to store and share data.

Most people now version control their code (if you don’t that’s another mistake!! See git). In an attempt to share data, it might be tempting to add data files to version control. That’s ok for very small files but git is not optimized for data, especially large files.

5. Write functions instead of DAGs

Enough about data, lets talk about the actual code! Since one of the first things you learn when you learn to code are functions, data science code is mostly organized as a series of functions that are run linearly. That causes several problems, see 4 Reasons Why Your Machine Learning Code is Probably Bad.

Solution: Instead of linearly chaining functions, data science code is better written as a set of tasks with dependencies between them. Use d6tflow or airflow.

Like functions, for loops are the first thing you learn when you learn to code. Easy to understand, but they are slow and excessively wordy, typically indicating you are unaware of vectorized alternatives.

Solution: Numpy, scipy and pandas have vectorized functions for most things that you think might require for loops.

As data, parameters or user input change, your code might break, sometimes without you noticing. That can lead to bad output and if someone makes decisions based on your output, bad data will lead to bad decisions!

Solution: Use assert statements to check for data quality. pandas has equality tests, d6tstack has checks for data ingestion and d6tjoin for data joins. Code for example data checks:

I get it, you’re in a hurry to produce some analysis. You hack things together to get results to your client or boss. Then a week later they come back and say “can you change xyz” or “can you update this please”. You look at your code and can’t remember why you did what you did. And now imagine someone else has to run it.

Solution: Take the extra time, even if it’s after you’ve delivered the analysis, to document what you did. You will thank yourself and other will do so even more! You’ll look like a pro!

9. Save data as csv or pickle

Back data, it’s DATA science after all. Just like functions and for loops, CSVs and pickle files are commonly used but they are actually not very good. CSVs don’t include a schema so everyone has to parse numbers and dates again. Pickles solve that but only work in python and are not compressed. Both are not good formats to store large datasets.

Solution: Use parquet or other binary data formats with data schemas, ideally ones that compress data. d6tflowautomatically saves data output of tasks as parquet so you don’t have to deal with it.

Lets conclude with a controversial one: jupyter notebooks are as common as CSVs. A lot of people use them. That doesn’t make them good. Jupyter notebooks promote a lot of bad software engineering habits mentioned above, notably:

It feels easy to get started but scales poorly.

Solution: Use pycharm and/or spyder.