Everything you need to know about Progressive Web App development

Ordinary mobile apps do not seem to work anymore. The number of apps in the App Store and Play Market is overwhelmingly huge. This is a challenge both for businesses, who want their apps to be visible, and for customers, who try to find the application they need.

And the development of traditional mobile apps is costly and time-consuming, while the user experience is slow and tangled.

What Are Progressive Web Applications?

In the simplest terms, a progressive web app is a website made to resemble an application installed on your smartphone, laptop, tablet, or desktop.

Progressive web app developers optimize web applications since they provide app-like navigation and excellent visual content. This is implemented with the help of Javascript files, called service workers, which enable offline execution of the app and offline information storage.

PWA development helps the developers and businesses bridge the gap between web and native experiences, which sometimes results in time-consuming, discouraging, or unreliable user experience.

A progressive web app development company understands that having to look for an app in the store is too much effort for modern-day users. People strive to save their time and effort and, at the same time, to find the most effective solutions. Therefore, PWA technology is applied to enable users to access a native-like mobile version of their favorite website with a single tap.

What Are the Benefits of Progressive Web Applications? 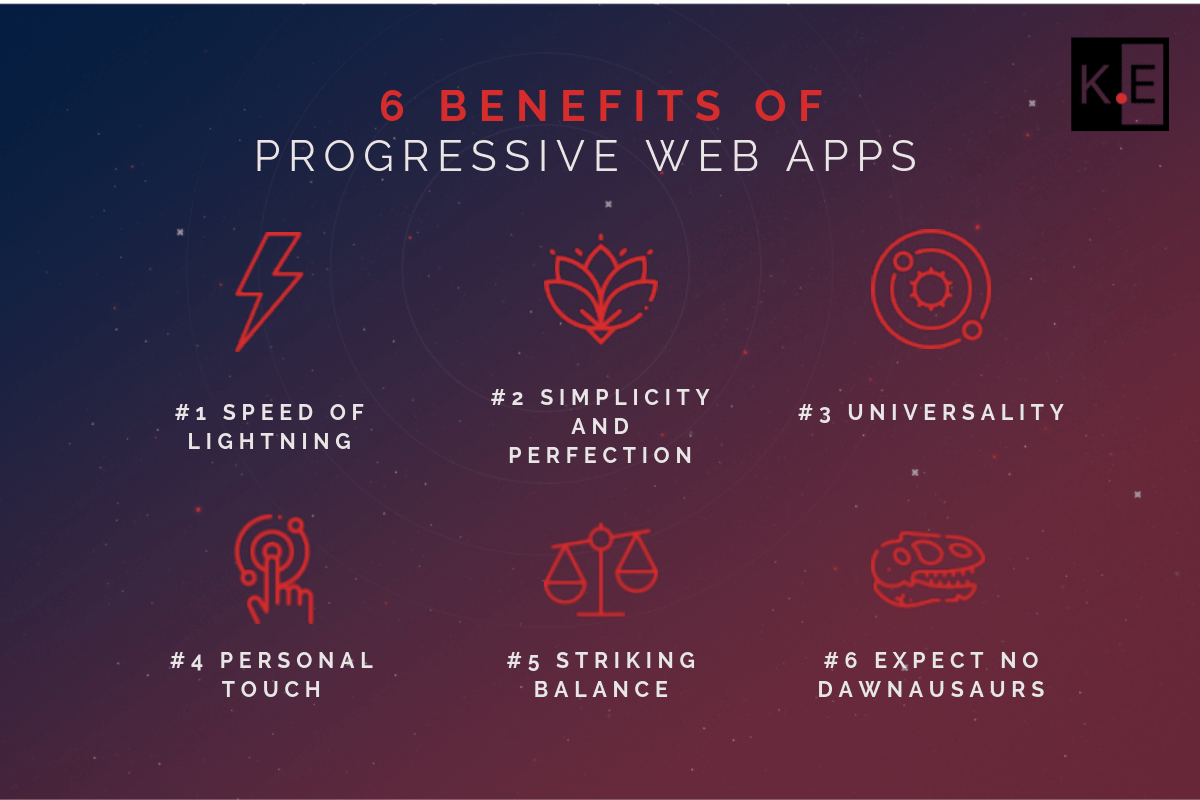 The greatest benefit of a progressive web app is the ability to work offline and the absence of all the bars and buttons that a mobile browser has.

Not only progressive web applications are more convenient for the user, but also they are cheaper and faster to develop for the business. In fact, PWA developers have no need to write separate codes for different platforms, which greatly limits the overall cost of the final product and the time spent on its development. Also, since PWAs are installed from the website itself, developers do not need to mess with deploying the app to the app store, following all the requirements on design or logic of the app, improving the visibility of the app, etc. Such an app is offered only on the website itself, which spares users the feeling that it is a one-time install-click-and-delete app from the store.

What Are the Drawbacks of Progressive Web Applications?

Why Is PWA Development the Future?

Progressive app development is strongly patronized by Google Inc., which believes PWA development to be the future of software. According to Google articles, with progressive web apps, AliExpress has boosted the conversion rate for its new users by 104% and increased average time spent per session by about 74%.

PWA developers helped a Saudi retailer of electronics eXtra Electronics generate 100% more sales and to attract new users via web push notifications, which are also the part of a progressive web app.

Similarly, an American retailer 5miles has increased conversions by 60% and decreased bounce rate by 50%. Also, with the help of a PWA development company, a Nigerian e-commerce platform Konga has cut data usage by about 92%. A progressive web app is also actively used by The Washington Post, and it has enabled them to decrease page loading time by ten times.

Progressive web apps can also be used to make games more enjoyable as in the case of 2048 or BreakLock. PWAs are also employed by such a well-known entertainment platform as 9GAG, a coffee retailer Starbucks, or a popular service Google Maps.

PWAs are equally loved by Google and Microsoft as both companies recognize great potential in this technology. It is rumored, however, that Microsoft has immense hopes for progressive web apps as it plans to reenter the smartphone market with its innovative Andromeda device. While the launch of this foldable smartphone is scheduled for late 2019, it is generally believed that Microsoft will bet not only on the revolutionary hardware solution but also on all-PWA software for the updated OS.

And yet, the niche is still almost free, and as of March 2019, there were only 32 PWAs published on Windows 10 Store. To compare, at the end of 2018, this very store featured about 700,000 regular apps. More than that, as of now, there are no PWAs for smart TVs or any other IoT devices, which yet could greatly benefit from such a technology. Therefore, progressive web apps are a perfect choice for those who want to make their business unique, to impress the customer, and to pioneer in such a promising field.

As long as mobile devices are gradually overtaking desktops, PWA is a perfect opportunity for a business to broaden its circle of influence and to take a firm position online. At the same time, one can greatly save on the development and maintenance of the app.

What Does a Progressive Web App Development Company Do?

As in the case of mobile or web software, progressive web app developers start with the discovery stage, prototyping, POC, or MVP. After that, the PWA team should create a responsive design, which will look perfect at any platform and any device. The progressive app development process itself should be tailored to the needs of a specific business, and PWA developers should be fully aware of customer needs and interests. The product has to be continuously tested by a progressive web app development company in order to fix mistakes and prevent further errors from occurring.

If the business already has a website and wants to adapt it to the PWA technology, the progressive web app development company should provide a well-detailed and properly planned migration strategy.

A PWA development company may also offer SEO services to make sure that the website and, respectively, the progressive web application are easily searchable. An SEO-friendly PWA can considerably boost web-traffic and conversion rates.

After the progressive web application development is over and the final product is launched, a reliable PWA development company offers its customers a team of PWA developers for continuous support and maintenance.

☞ How to build a Progressive Web Apps

☞ How to build Progressive Web Apps (PWAs) with Angular 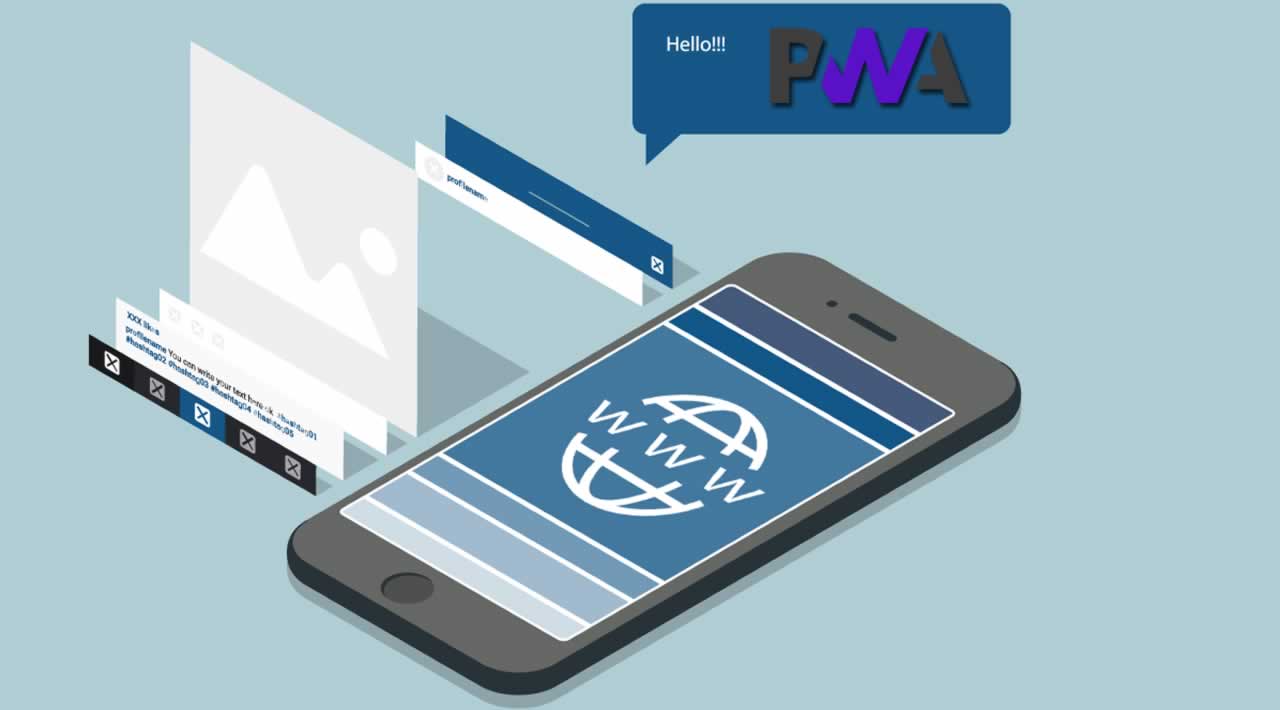