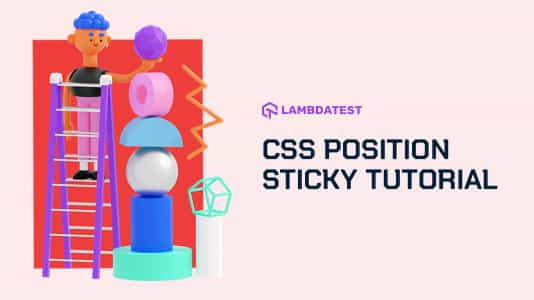 Create a new CSS position sticky and get your CSS position fixed with this tutorial that also discusses cross browser compatibility for CSS elements. FacebookTwitterLinkedInWhatsAppEmail Seven to eight years back, CSS developers brought a fifth child into the positioning element world. The name of this element was “sticky” because all it does is get ‘stick’ to the viewport and just be in your sight (depending on the developer though). Although the sticky property of an element gives a name to a particular property in CSS, it does not bring anything ‘new” to the table.

Seven to eight years back, CSS developers brought a fifth child into the positioning element world. The name of this element was “sticky” because all it does is get ‘stick’ to the viewport and just be in your sight (depending on the developer though). Although the sticky property of an element gives a name to a particular property in CSS, it does not bring anything ‘new” to the table. If I say, “let’s use a sticky div box,” you know what I am talking about, but before its release people would just define what they wanted to do like “Can I have a div box that would always be visible or available even if the people are scrolling?”

The entire point of bringing this up is to tell you that stickiness existed in web development long before it was introduced as a standard in CSS. This post will dive into the CSS position sticky, and we will find out how to get the CSS position fixed. Before we do that, let’s briefly see how people used the position sticky property before its official release.

Need For Position Sticky In CSS

As I mentioned, the position sticky in CSS was used even before it came out as a standard in CSS. So, why did they introduce it when everything was working fine?

Apart from CSS, the stickiness can be achieved through JavaScript also. In JavaScript, we make the use of scroll event handlers and calculate the offset of the page. With these values, we make calculations to stick the element as soon as the offset reaches a point. This used to work earlier, but for the last eight-nine years, scroll handlers became a total mess when better graphics were introduced in the systems.

The problem with scroll handlers is that unlike CSS, it relies on the CPU for doing its job. On the other hand, CSS uses hardware acceleration (a standard on all the browsers now for better cross browser compatibility), which means it relies on the GPU for doing its job. Due to this, we would often see the UI of the website, breaking down quickly when the sticky element is coded in JavaScript. A better solution to this is bringing the stickiness to the GPU. The only way to do that is by introducing it as a standard in CSS. Looking back, it actually makes a lot of sense. So, the “sticky” property was added to the positions which already had four values. To understand how to get “CSS position fixed,” we should know the behavior of other CSS values.

CSS Position And Its Values

Static: The element with a static value remains with the natural flow of the document. Specifying positions through the top, left, right, etc., will not affect this element. This is also the default behavior of an element in HTML.

Relative:  The relative value is the same as the static value but now the left, right, top, bottom values will affect the position of the element. So, the position of the element will become relative to its default position and hence the word relative. Although, it is important to remember that moving this element will not affect other elements and they will still remain in their actual position and actual space. If z-index is not set properly, your two elements might overlap like this: