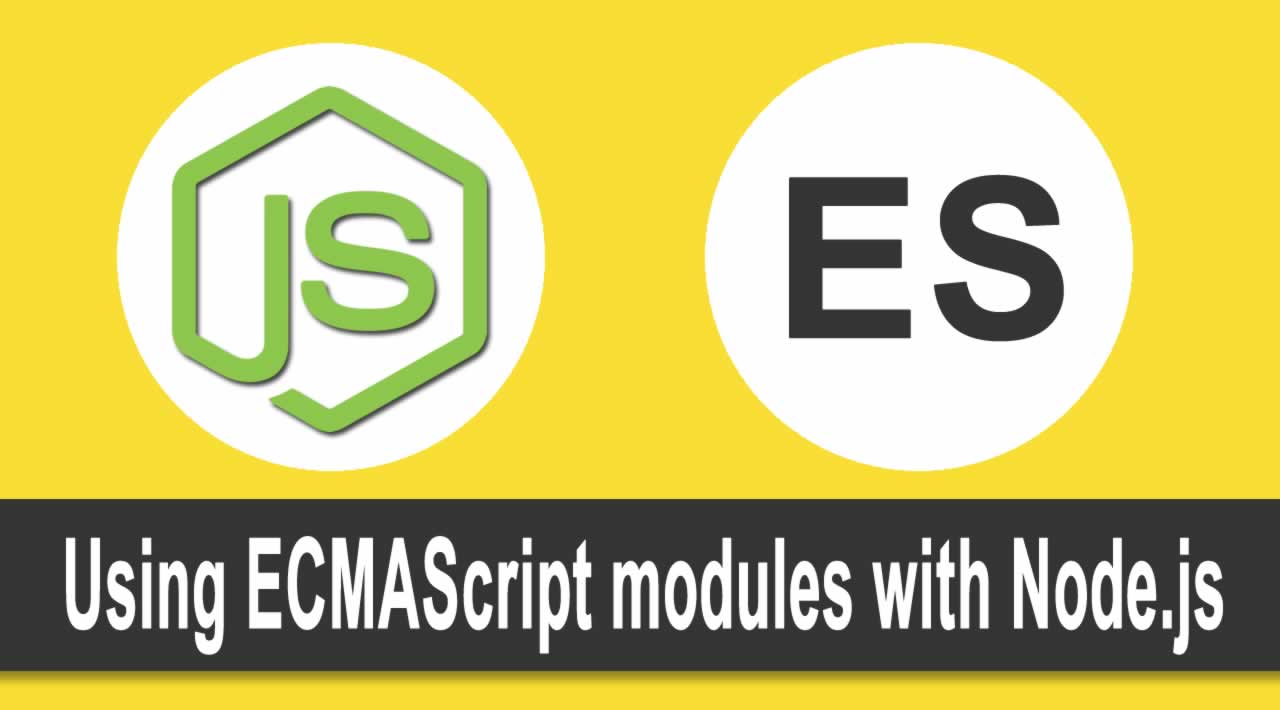 ECMAScript modules are the official standard format to package JavaScript code for reuse. Modules are defined using a variety of import and export statements. Node.js fully supports ECMAScript modules as they are currently specified and provides limited interoperability between them and the existing module format, CommonJS.

ECMAScript modules are the official standard format to package JavaScript code for reuse. Modules are defined using a variety of import and export statements.

Node.js fully supports ECMAScript modules as they are currently specified and provides limited interoperability between them and the existing module format, CommonJS.

In this article, we’ll explore How to use ECMAScript modules with Node.js. We’ll create a couple examples to give you a closer look at how you can migrate your codebase to make use the power of ESM.

If you’re a beginner in ES modules, let’s take a closer look at how to use them. If you’ve ever used React or Vue.js, you’ve probably seen something like this:

The first example, in particular, is a good one because it expresses the nature of ES modules for what is a default module or not. Consider the following code snippet:

We can only have one default module exported by file. That’s why Fragment has to be imported into the { }s once it is not included as a default. Its exportation would look like:

And you can, obviously, create your own, like so:

We made a custom demo for .

Go and save this code into an mjs extension file, and just as we saw in the React example, you can import it to another file:

The mjs extension can lead to some confusion when we compare its use against js files. For JavaScript specification, there are differences between them. For example, modules are, by definition, strict (as in 'use strict'), so it means that a lot of checks are made and “unsafe” actions are prohibited when implementing your JavaScript modules.

The js vs. mjs fight extends to the fact that JavaScript needs to know if it’s dealing with a module or a script, but the spec doesn’t provide it so far. If you get a CommonJS script, for example, you’re not allowed to use 'import from' in it (just require), so they can force each extension to import the appropriate, respective one:

So, what happens to the following scenario?

When it comes to ES modules, it’s well known that they’re static — i.e, you can only “go to” them at compilation time, not runtime. That’s why we have to import them in the beginning of the file.

The first thing to notice here is that you cannot use require in a mjs file. Instead, we must use the import syntax we’ve previously seen:

But only if the default import (module.exports) has been exported into the CommonJS file (myESTest.js). Simple, isn’t it?

However, when the opposite takes place, we can’t simply use:

Remember, ESM can’t be imported via the require function. On the other side, if you try the import from syntax, we’ll get an error because CommonJS files are not allowed to use it:

Domenic Denicola proposed a process to dynamically import ES modules via the import() function in various ways. Please refer to the link to read a bit more about it. With it, our code will look like this:

Note, however, that this approach will lead us to make use of an async function. You can also implement this via callbacks, promises, and other techniques described in more detail here.

Note: This type of importing is only available from Node 10+.

There are two main ways for you to run Node.js along with ES modules:

In the Node GitHub repo, you can find a page called “Plan for New Modules Implementation,” where you can follow the official plan to support ECMAScript modules in Node.js. The effort is split up into four phases, and at the time of writing, it is now in the last one, with hopes it will be mature enough to no longer require use of --experimental-modules.

Let’s start with the first (and official) way provided by Node.js ito use ES modules in your Node environment.

First, as previously mentioned, make sure to have a version of Node higher than 10 on your machine. You can use the power of NVM to manage and upgrade your current version.

Then, we’re going to create a single example, just to give you a taste of how the modules work out. Create the following structure:

The first file, hi.mjs, will host the code for a single function that’ll concat a string param and return a hello message:

Note that we’re making use of the export feature. The second file, runner.mjs, will take care of importing our function and printing the message to the console:

To run our code, just issue the following command:

And this will be the output:

Note that Node will advise you about the ESM experimental nature of this feature.

When it comes to the use of Babel, webpack, or any other tool that would help us to use ES modules wherever we want, we have another solution for Node.js specifically that is much more succinct: it is the @std/esm package.

It basically consists of a module loader that dispenses Babel or other bundle-like tools. No dependencies are required; it allows you to use ES modules in Node.js v4+ super quickly. And, of course, it is totally compliant with the Node ESM specification.

Let’s now consider a different hello world, this time on the web, with Express.js. We’ll make a CJS file to talk with an ESM one.

But first, in the root folder of our project, run the following commands:

Follow the steps, intuitively, to set up your package.json structure. Once finished, create two new files:

Note that, here, we’re making use of the previous mjs file that hosts the sayHi() function. That’s no big news once we’ve seen that we can perfectly import mjs files from another one. Take a look at how we import this file to our start script:

Once we’re not using the dynamic import, the default must be used. The @std/esm rewrites require and also adds functionality to the Node version module being used. It does some inline and on-demand transformations, processing and caching to the executions in real time.

Before you run the example, make sure to adapt your package.json to understand which file will be the starting point:

After running the npm start command, that’ll be the output at the browser:

Node-RED Module for Visual NodeJS Programming. In this article, I'm going to introduce you to a NodeJS module that allows you to create. Node-RED: A flow-based programming tool that allows you to design processes (aka flows) by wiring together microservices. Simple Node.js Express App.

A decade has passed since initial release of the node.js, it has gained immense popularity. Read in this article, what is nodejs used for? Nodejs Use Cases.