This video shows you how to Extract daily news from NASA | NASA Automation | How to Make Jarvis. Jarvis Python | Python Jarvis 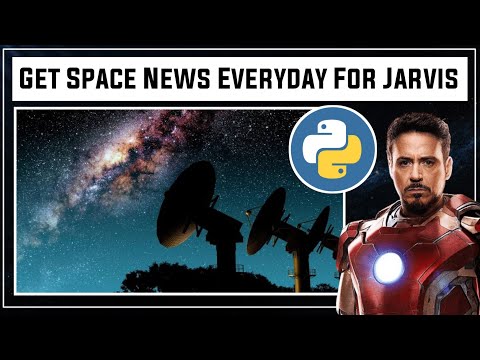 Amid NASA’s progress in AI research starting from ML model to predict hurricanes to partnering with Google to make quantum computing accessible, it has now developed a new AI tool to classify a cluster of craters on Mars.

The launch of this new AI tool, built on a machine learning algorithm, was aimed at helping scientists to reduce their process time of scanning a single Context Camera image. Thus, researchers from Jet Propulsion Laboratory (JPL), created this tool also called an “automated fresh impact crater classifier”, where for the “first time” researchers are leveraging AI to identify unknown craters on the Red Planet, stated by NASA, in their statement.

According to their news release, typically scientists and researchers spend hours each day studying images to understand “dust devils, avalanches, and shifting dunes,” and approximately 40 minutes to scan a single Context Camera image; however this tool will significantly reduce the processing time and advance the workflow massively.

The launch of this tool is a part of a broader NASA’s bigger effort — COSMIC — capturing onboard summarization to monitor image change that develops technologies for future generations of Mars orbiters.

How Has The Tool Been Created?

In order to train the AI tool, or also known as the crater classifier, the researchers and scientists fed the model 6,830 Context Camera images. These images are taken from the context cameras as well as those of locations with previously discovered impacts — confirmed via HiRISE.

Once the model has been trained, the tool is equipped with 112,000 images that have been taken by the Context Camera on NASA’s Mars Reconnaissance Orbiter. The training of the model was done on a supercomputer cluster at JPL, which was created by dozens of high-performance computers that can operate in concert with one another. Such advancement will help the scientists in reducing the processing time to an average of just five seconds.

While this model development process was going on, the scientists have undergone some significant challenges, one was to figure out “how to run up to 750 copies of the classifier across the entire cluster simultaneously,” stated by the JPL computer scientist Gary Doran.

To explain it, Doran said, technically, it isn’t feasible to process over 112,000 images in a reasonable amount of time without distributing the work across many computers, and that’s why it was required to split the problem into smaller pieces that can be solved in parallel.

However though this advancement made a massive change in scientist workflow, the classifier still requires a human to check its work.

To this point, JPL computer scientist Kiri Wagstaff stated, artificial intelligence can’t replace the skilled analysis work of a scientist; however, this new algorithm can act as an assistant. “This paves the way for an exciting symbiosis of human and AI’ investigators’ working together to accelerate scientific discovery.”

This video shows you how to Extract daily news from NASA | NASA Automation | How to Make Jarvis. Jarvis Python | Python Jarvis

The newspaper sales have gone down ever since the media decided to have their news mobile apps. To be precise, a 7% drop in sales in 2015, and the percentage is predicted to be even more in the present. According to a survey, an average user spends 2 hours on phone to check news updates.

Mobile phones have been around for a while now but mobile apps have taken over the human lifestyle. In America, only 2% of the population said they read printed newspapers and find it useful. The majority of the population either don’t read the news more often or read it on a digital platform.

In India, the readership of print media has decreased as per May 2017 reports from the Audit Bureau of Circulation (ABC). The same is the case with countries such as the UK, Germany, etc.

The stats above show the readership of some popular news channels such as Buzzfeed, CNN, Fox News, etc. All these stats prove how fast the newspaper mobile apps are becoming a choice over the print media. However, for some news channels, the cost of news app development is often a matter of concern.

The ROI From News Apps

Whether you are going to make your news app or get it developed by news app builder, you have to know the benefits you will get from the news app. It does not matter how much money you have put in the news app development as long as it gives a good return on the investment.

Just like you have a subscription for your printed newspaper, you can apply the same method to deliver quality content to users in exchange for a fee. News apps like NYTimes have this method where they offer a certain number of free articles to readers and if they wish to read more than that, they have to get a subscription.

Businesses have spent more than $100 billion on mobile advertisements. For any news company having a mobile app, this becomes a great source of income. Having personalized ads for businesses will get you started. It will also be a good option to choose the ads as per the reader’s interests to increase the possibility of viewing the ad.

Running a personalized campaign for sponsors on your news mobile app is another way of revenue. Tickets to shows or events can be sold on the app. This can also be done for a specific location or a particular group of people having similar interests.

It is sort of a given that with mobile apps the reach will increase. However, with the reach, the readership will also increase. Countries like Sweden, South Korea, and Spain have larger news app users. The format in which the content is displayed on apps is so much more appealing than that on the print media. The use of GIFs and high-quality images increases the chance of readership.

So, now you know the ROI from a news app. Let’s move on to further sections of news app development and the involved cost in newspaper app development.

Which is a better choice, Android, or iOS?

This is the most common yet the most crucial question when it comes to news app development. The debate between Android and iOS is ongoing ever since both of these became the top platforms in the development world. When it comes to the security of the app, iOS has been a more secure platform in 2018. But Android has a larger audience so if you are going for news app development for the first time and want to get more audience immediately then Android is a choice.

But if you wish to go for one platform only, a newspaper app for iOS will be cheaper as compared to Android news app development. If you are wondering how to make a news app for the iPhone, then you can contact our team for any assistance.

Since we are talking about news mobile app development, the location plays a key role. Locals are likely to be more interested in your app than far-off readers. Choosing the platform that most of your local readers are on is the best choice. To make things more simple, just go for a platform that is the most popular among your readers.

What Features Should Be Included in News App Development?

Assuming that you are a first-timer while getting a news app developed, we shall discuss what features contribute to making a successful newspaper app. If you are planning to build the app yourself, this 76 point checklist for app development will answer all your ‘how to develop news app’ questions.

Before we head on to news app development cost, let us see the features a news app must have:

This feature is very important. The users must be able to create a profile by logging in through their email address or their mobile number. Users should also be allowed to log in using any of their social media accounts such as Facebook, Twitter, or LinkedIn. Allowing these social media accounts to link with your app is a wise choice as the users can easily share any news on such socials.

A user profile needs to be filled by the users that will include data relevant to you. When a user has a profile it becomes easier to suggest content according to their interests and past search results. These profiles can also be used to create engagement on any of the news content, eventually increasing the reach.

This feature is seen on many apps and has been loved by users. Having a filter in the search bar allows users to search specific news as well as lets you know what kind of content your readers are looking for. A search can be filtered according to location, keyword, date, or latest trending news.

As per the graph above, 6 out of 10 people like to read the news on their mobile phones. So, to keep your readers up to date about when news a posted or what’s the latest news update, push notification can be used. This feature sends a notification to the mobile devices of the readers, letting them know what’s up in a fraction of a second. This feature is also said to be one of the marketing tools as it helps in user retention.

Filtering helps in what the users want to see and do not want to see. Usually, this is done by having a ‘Don’t show this to me’ option on every news post. The more optimized feed a user will have, the more time they will spend on the app.

Most users prefer saving an interesting piece of content for later and for the same offline reading option should be used. This feature allows users to save content to read in an offline mode. This feature helps when there is no internet or the internet connection is slow.

All Types of Media

Words are not enough to make a piece of content interesting and that’s when images, videos, and audios come into the picture. The app should support all types of media including GIFs, PDFs, Slides, etc. This gives more flexibility to deliver the right message and express properly.

This is the most common feature in any social media app and should not be eliminated in a news app. The option to engage and the ability to share a piece of news makes the whole user experience a fun one. The share option should also allow sharing on other socials like Whatsapp, Facebook, Twitter, etc.

These were some of the features that a news app must include. Now we come to the most awaited section of the article and that is the cost of developing a news-based mobile application.

How Much Does It Cost to Build A Newspaper Application?

These points affect the news app development cost. However, the general MVP cost estimate for a news app ranges between $18,000 to $20,000 for a basic app.

If you wish to add any additional features, the cost may rise. A high-end news app allowing more user action costs around $35,000 to $45,000.

This is not as scary as it sounds because the better the app, the more the ROI on the app.

However, if you know how to develop a news app for Android or iOS then you shall only pay for the tools you will be using. Some app development cost calculators can give an estimate of the development cost.