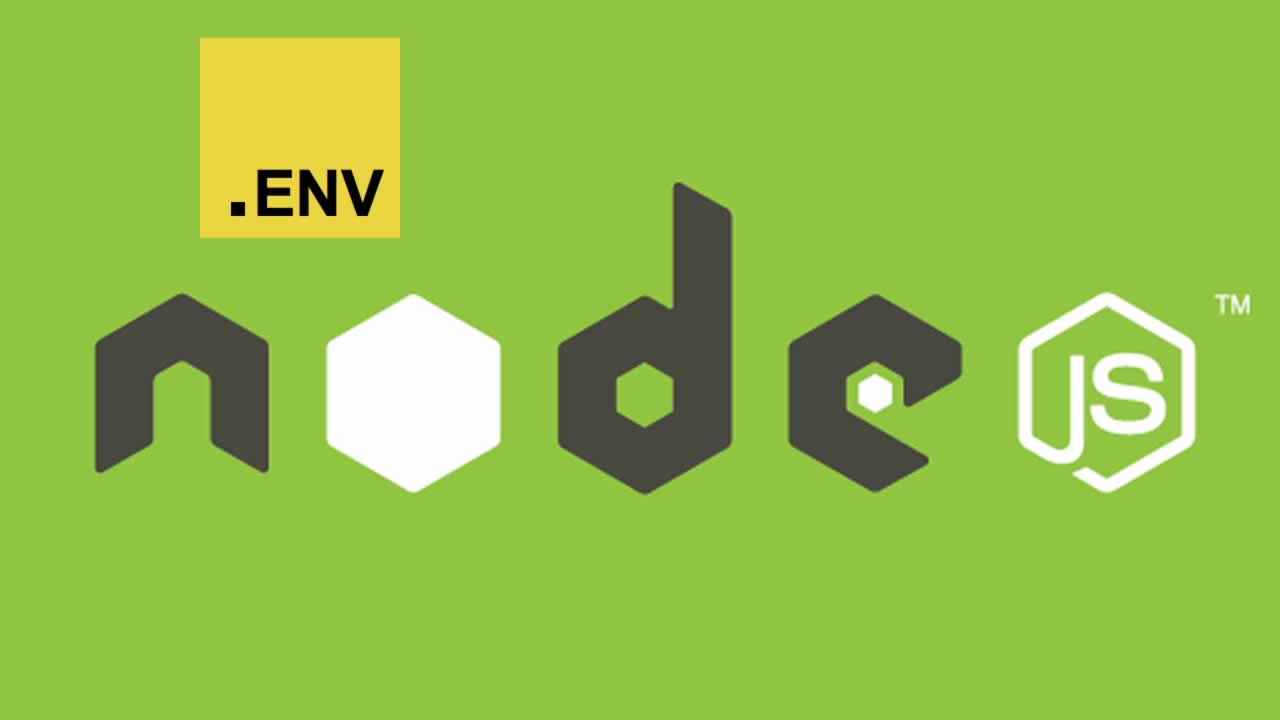 Environment variables are a fundamental part of Node development, but for some reason I never bothered with learning how to properly use them.

Maybe because they are called “Environment Variables.”

Just the words “Environment Variable” trigger a PTSD-laced flashback in which I am trying to add the correct path to the Java Home directory on Windows. Does it go in PATH or JAVA_HOME or both? Do I need to end it with a semicolon? WHY AM I USING JAVA?

In this context, environment variables are really more like “Configuration Settings.” See how much nicer that sounds?

If you’ve done .NET before, you might be familiar with something like a web.config file. Node environment variables work much the same was as settings in a web.config — they’re a way for you to pass in information that you don’t want to hard code. 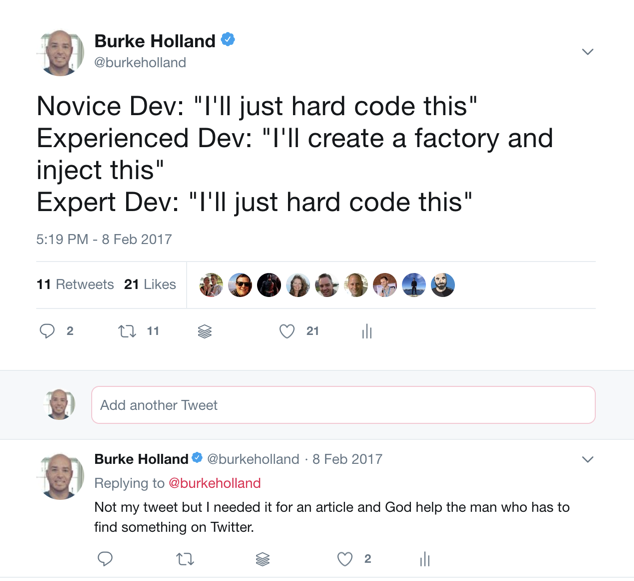 Quoting yourself is the pinnacle of delusion

Pass it in the terminal

You can pass environment variables on the terminal as part of your Node process. For instance, if you were running an Express app and wanted to pass in the port, you could do it like this…

Fun fact: port 65535 is the largest TCP/IP network value available. How do I know that? StackOverflow of course. How does anybody know anything? But you can only go as high as port 65534 for a web app because that’s the highest port Chrome will connect to. How do I know that? Because Liran Tal told me in the comments. You should follow him. Between the two of us he’s the one who knows what he’s doing.

Now to use the variable in your code, you would use the process.env object.

But this could get ugly. If you had a connection string, you probably wouldn’t want to start passing multiple variables on the terminal. It would look like you are hoarding configuration values, and someone who loves you could stage an intervention and that would be awkward for everyone involved.

This doesn’t scale, and everyone wants to scale. According to every architect I’ve ever sat in a meeting with, “scaling” is more important than the application even working.

So let’s look at another way: .env files.

Use a .env file

.env files allow you to put your environment variables inside a file. You just create a new file called .env in your project and slap your variables in there on different lines.

To read these values, there are a couple of options, but the easiest is to use the dotenv package from npm.

Then you just require that package in your project wherever you need to use environment variables. The dotenv package will pick up that file and load those settings into Node.

PROTIP: Don’t check your .env file into Github. It has all you secrets in it and Github will email you and tell you so. Don’t be like me.

OK — Nice. But this is kind of a pain. You have to put this in every single file where you want to use environment variables AND you have to deploy the dotenv to production where you don’t actually need it. I’m not a huge fan of deploying pointless code, but I guess I just described my whole career.

Luckily, you are using VS Code (because of course you are), so you have some other options.

Working with .env files in VS Code

First off, you can install the DotENV extension for code which will give you nice syntax highlighting in your .env files. 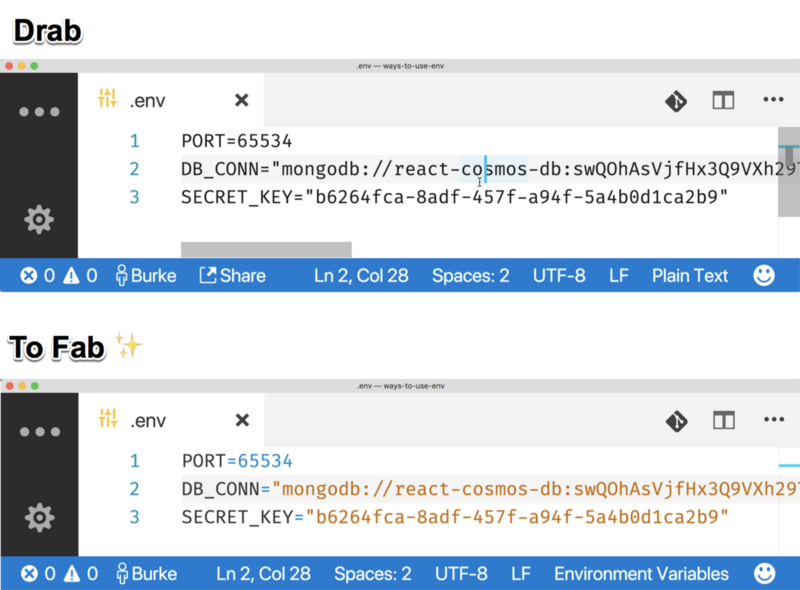 The Node debugger for VS Code (already there, no need to install anything) supports loading in .env files via launch configurations. You can read more more about Launch Configurations here.

When you create a basic Node Launch Configuration (click on the gear and select Node), you can do one or both of two things.

The first is you can simply pass variables in on the launch config. 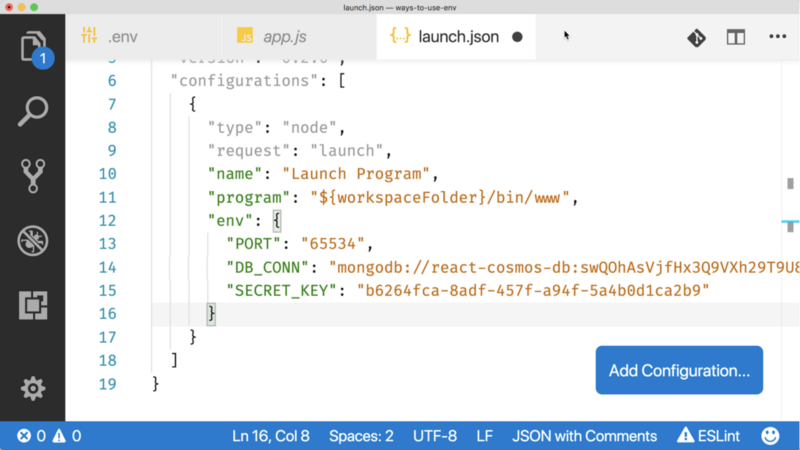 This is nice, but the fact that every value has to be a string bothers me a bit. It’s a number, not a string. JavaScript only has, like, 3 types. Don’t take one of them away from me.

There is a simpler way here. We’ve already learned to love .env files, so instead of passing them, we can just give VS Code the name of the .env file. 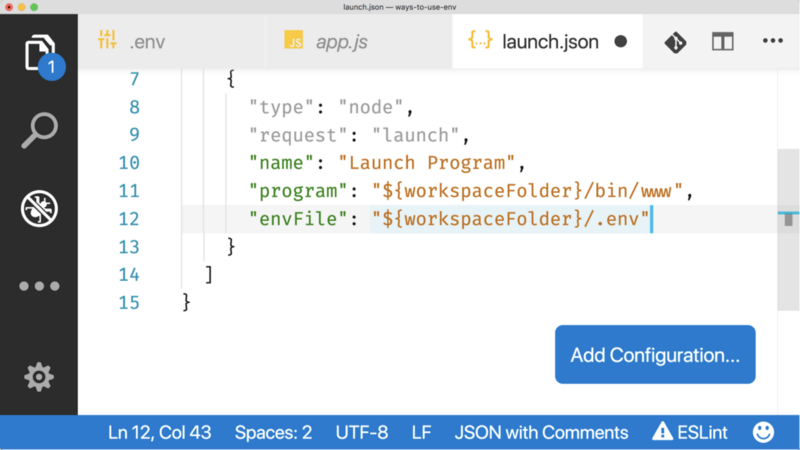 And as long as we are starting our process from VS Code, environment variables files are loaded in. We don’t have to mutilate numbers into strings and we aren’t deploying worthless code into production. Well, at least you aren’t.

Starting with NPM instead of Node

You might have gotten this far and thought, “Burke, I never ever run node anything. It’s always an npm script like npm start”.

In this case you can still use VS Code Launch configs. Instead of using a standard Node Launch process, you add a config that is a “Launch Via NPM” task.

Now you can add back in your envFile line and tweak the runtimeArgs so that they launch the correct script. This is usually something like “start” or “debug”. 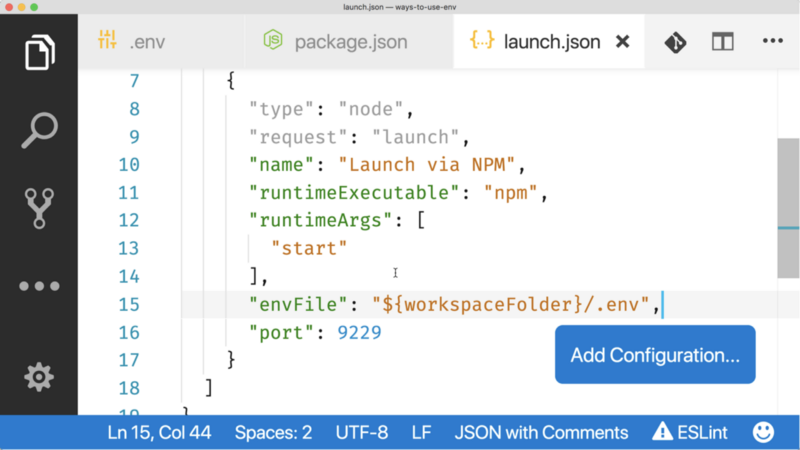 Note that you have to add the --inspect flag to your npm script so that VS Code can attach the debugger. Otherwise the task will launch, but the VS Code debugger will time out like me trying to get a date in high school.

So far we’ve looked at how to define variables for development. You likely won’t use .env files in production, and VS Code Launch Configurations aren’t going to be super helpful on a server.

In production, variables will be defined however your platform of choice allows you to do so. In the case of Azure, there are 3 different ways to define and manage environment variables.

The first way is to use the Azure CLI.

Which works, but, ew.

Another way is via the Azure web portal. I don’t always use a web portal, but when I do, it’s to set environment variables.

In the case of Azure, these are called “Application Settings”. 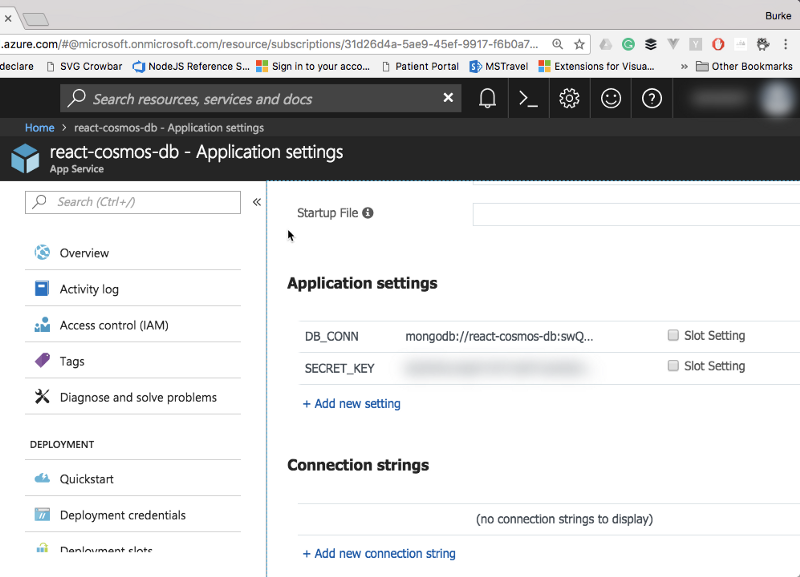 And since you are using VS Code, you can install the App Service extension and manage all the App Settings right from the editor.

I love not having to leave VS Code to do anything. I would write emails in VS Code if I could.

Now you know what I know (which aint a lot, let me tell you) and I feel like I accomplished my goal of a tasteful amount of Java jokes along the way. Just in case I didn’t, I’ll leave you with this one.

☞ Getting Started with NodeJS for Beginners