Use Sentiment Analysis With Python to Classify Movie Reviews

Sentiment analysis is a powerful tool that allows computers to understand the underlying subjective tone of a piece of writing. This is something that humans have difficulty with, and as you might imagine, it isn’t always so easy for computers, either. But with the right tools and Python, you can use sentiment analysis to better understand the sentiment of a piece of writing.

Why would you want to do that? There are a lot of uses for sentiment analysis, such as understanding how stock traders feel about a particular company by using social media data or aggregating reviews, which you’ll get to do by the end of this tutorial.

This tutorial is ideal for beginning machine learning practitioners who want a project-focused guide to building sentiment analysis pipelines with spaCy.

You should be familiar with basic machine learning techniques like binary classification as well as the concepts behind them, such as training loops, data batches, and weights and biases. If you’re unfamiliar with machine learning, then you can kickstart your journey by learning about logistic regression.

Any sentiment analysis workflow begins with loading data. But what do you do once the data’s been loaded? You need to process it through a natural language processing pipeline before you can do anything interesting with it.

The necessary steps include (but aren’t limited to) the following:

All these steps serve to reduce the noise inherent in any human-readable text and improve the accuracy of your classifier’s results. There are lots of great tools to help with this, such as the Natural Language Toolkit, TextBlob, and spaCy. For this tutorial, you’ll use spaCy.

Note: spaCy is a very powerful tool with many features. For a deep dive into many of these features, check out Natural Language Processing With spaCy.

Before you go further, make sure you have spaCy and its English model installed:

The first command installs spaCy, and the second uses spaCy to download its English language model. spaCy supports a number of different languages, which are listed on the spaCy website.

Next, you’ll learn how to use spaCy to help with the preprocessing steps you learned about earlier, starting with tokenization.

Tokenization is the process of breaking down chunks of text into smaller pieces. spaCy comes with a default processing pipeline that begins with tokenization, making this process a snap. In spaCy, you can do either sentence tokenization or word tokenization:

In this code, you set up some example text to tokenize, load spaCy’s English model, and then tokenize the text by passing it into the nlp constructor. This model includes a default processing pipeline that you can customize, as you’ll see later in the project section.

After that, you generate a list of tokens and print it. As you may have noticed, “word tokenization” is a slightly misleading term, as captured tokens include punctuation and other nonword strings.

Tokens are an important container type in spaCy and have a very rich set of features. In the next section, you’ll learn how to use one of those features to filter out stop words. 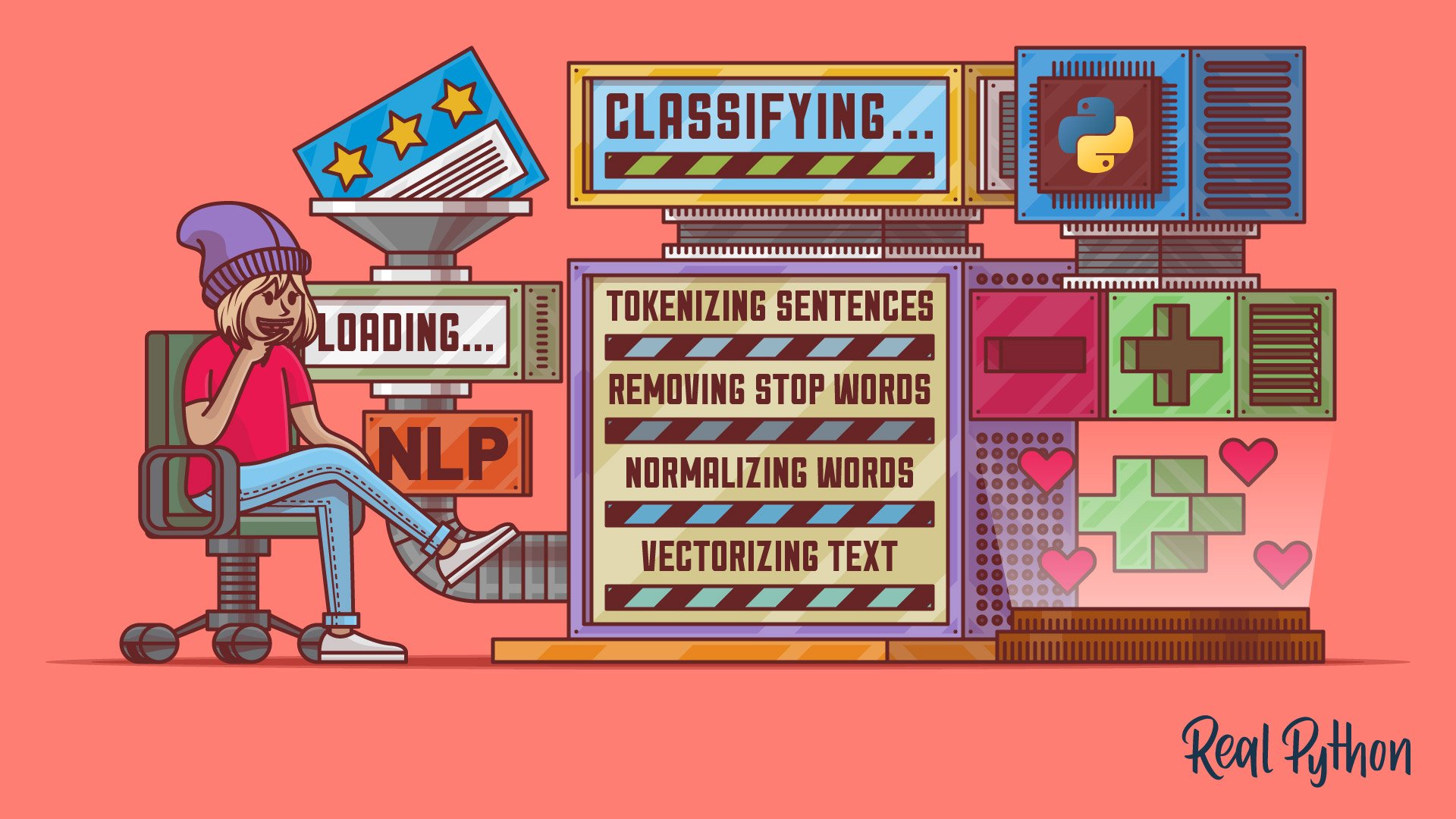 Sentiment analysis or opinion mining is a simple task of understanding the emotions of the writer of a particular text. What was the intent of the writer when writing a certain thing?

We use various natural language processing (NLP) and text analysis tools to figure out what could be subjective information. We need to identify, extract and quantify such details from the text for easier classification and working with the data.

But why do we need sentiment analysis?

Sentiment analysis serves as a fundamental aspect of dealing with customers on online portals and websites for the companies. They do this all the time to classify a comment as a query, complaint, suggestion, opinion, or just love for a product. This way they can easily sort through the comments or questions and prioritize what they need to handle first and even order them in a way that looks better. Companies sometimes even try to delete content that has a negative sentiment attached to it.

It is an easy way to understand and analyze public reception and perception of different ideas and concepts, or a newly launched product, maybe an event or a government policy.

Emotion understanding and sentiment analysis play a huge role in collaborative filtering based recommendation systems. Grouping together people who have similar reactions to a certain product and showing them related products. Like recommending movies to people by grouping them with others that have similar perceptions for a certain show or movie.

Lastly, they are also used for spam filtering and removing unwanted content.

How does sentiment analysis work?

NLP is the branch of AI dealing with texts, giving machines the ability to understand and derive from the text. For tasks such as virtual assistant, query solving, creating and maintaining human-like conversations, summarizing texts, spam detection, sentiment analysis, etc. it includes everything from counting the number of words to a machine writing a story, indistinguishable from human texts.

Also, a very common classification is based on what needs to be done with the data or the reason for sentiment analysis. Examples of which are

Based on what needs to be done and what kind of data we need to work with there are two major methods of tackling this problem.

In this machine learning project, we will use recurrent neural network for sentiment analysis in python.