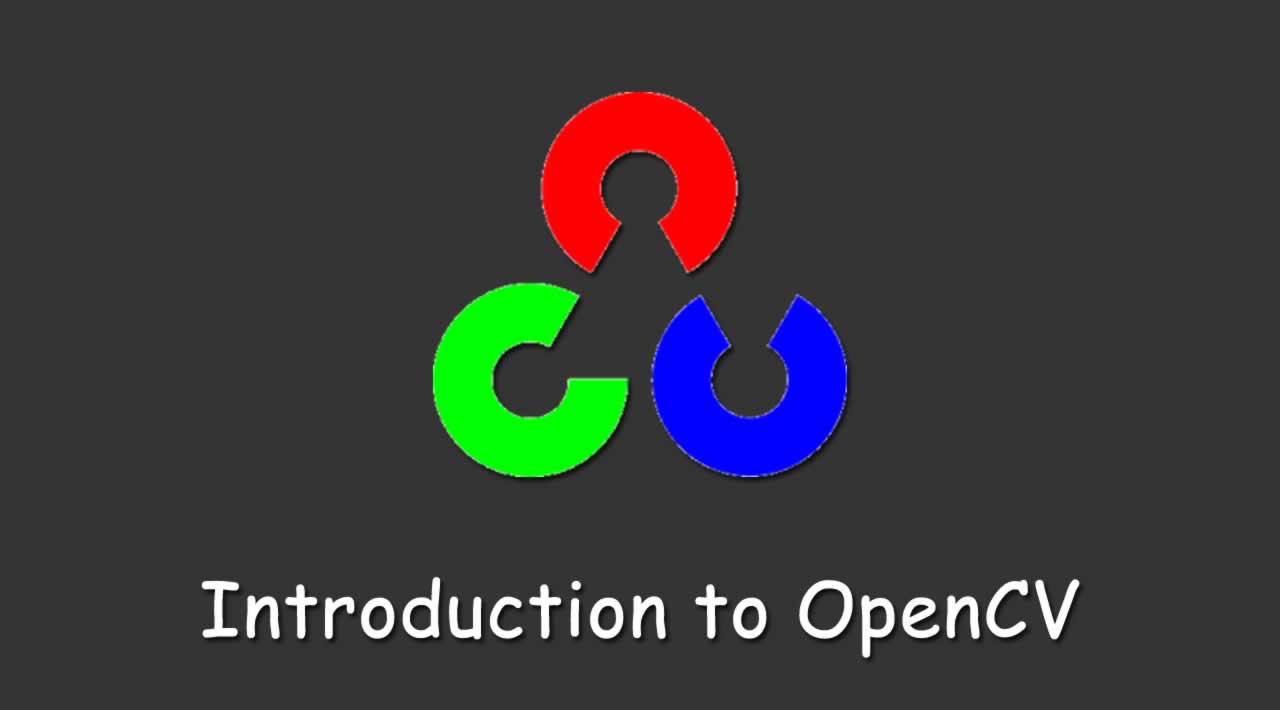 Learn how to setup OpenCV-Python on your computer!

OpenCV was started at Intel in 1999 by Gary Bradsky and the first release came out in 2000. Vadim Pisarevsky joined Gary Bradsky to manage Intel’s Russian software OpenCV team. In 2005, OpenCV was used on Stanley, the vehicle who won 2005 DARPA Grand Challenge. Later its active development continued under the support of Willow Garage, with Gary Bradsky and Vadim Pisarevsky leading the project. Right now, OpenCV supports a lot of algorithms related to Computer Vision and Machine Learning and it is expanding day-by-day.

OpenCV-Python is the Python API of OpenCV. It combines the best qualities of OpenCV C++ API and Python language.

Python is a general purpose programming language started by Guido van Rossum, which became very popular in short time mainly because of its simplicity and code readability. It enables the programmer to express his ideas in fewer lines of code without reducing any readability.

Compared to other languages like C/C++, Python is slower. But another important feature of Python is that it can be easily extended with C/C++. This feature helps us to write computationally intensive codes in C/C++ and create a Python wrapper for it so that we can use these wrappers as Python modules. This gives us two advantages: first, our code is as fast as original C/C++ code (since it is the actual C++ code working in background) and second, it is very easy to code in Python. This is how OpenCV-Python works, it is a Python wrapper around original C++ implementation.

And the support of Numpy makes the task more easier. Numpy is a highly optimized library for numerical operations. It gives a MATLAB-style syntax. All the OpenCV array structures are converted to-and-from Numpy arrays. So whatever operations you can do in Numpy, you can combine it with OpenCV, which increases number of weapons in your arsenal. Besides that, several other libraries like SciPy, Matplotlib which supports Numpy can be used with this.

So OpenCV-Python is an appropriate tool for fast prototyping of computer vision problems.

OpenCV introduces a new set of tutorials which will guide you through various functions available in OpenCV-Python. This guide is mainly focused on OpenCV 3.x version (although most of the tutorials will work with OpenCV 2.x also).

A prior knowledge on Python and Numpy is required before starting because they won’t be covered in this guide. Especially, a good knowledge on Numpy is must to write optimized codes in OpenCV-Python.

This tutorial has been started by Abid Rahman K. as part of Google Summer of Code 2013 program, under the guidance of Alexander Mordvintsev.

Since OpenCV is an open source initiative, all are welcome to make contributions to this library. And it is same for this tutorial also.

So, if you find any mistake in this tutorial (whether it be a small spelling mistake or a big error in code or concepts, whatever), feel free to correct it.

And that will be a good task for freshers who begin to contribute to open source projects. Just fork the OpenCV in github, make necessary corrections and send a pull request to OpenCV. OpenCV developers will check your pull request, give you important feedback and once it passes the approval of the reviewer, it will be merged to OpenCV. Then you become a open source contributor. Similar is the case with other tutorials, documentation etc.

Remember, we together can make this project a great success !!!

If the results are printed out without any errors, congratulations !!! You have installed OpenCV-Python successfully.

Another method to have 64-bit Python packages is to use ready-made Python distributions from third-parties like Anaconda, Enthought etc. It will be bigger in size, but will have everything you need. Everything in a single shell. You can also download 32-bit versions also.

We have installed with no other support like TBB, Eigen, Qt, Documentation etc. It would be difficult to explain it here. A more detailed video will be added soon or you can just hack around.

OpenCV-Python can be installed in Fedora in two ways, 1) Install from pre-built binaries available in fedora repositories, 2) Compile from the source. In this section, we will see both.

Another important thing is the additional libraries required. OpenCV-Python requires only Numpy (in addition to other dependencies, which we will see later). But in this tutorials, we also use Matplotlib for some easy and nice plotting purposes (which I feel much better compared to OpenCV). Matplotlib is optional, but highly recommended. Similarly we will also see IPython, an Interactive Python Terminal, which is also highly recommended.

Install all packages with following command in terminal as root.

If the results are printed out without any errors, congratulations !!! You have installed OpenCV-Python successfully.

It is quite easy. But there is a problem with this. Yum repositories may not contain the latest version of OpenCV always. For example, at the time of writing this tutorial, yum repository contains 2.4.5 while latest OpenCV version is 2.4.6. With respect to Python API, latest version will always contain much better support. Also, there may be chance of problems with camera support, video playback etc depending upon the drivers, ffmpeg, gstreamer packages present etc.

So my personnel preference is next method, i.e. compiling from source. Also at some point of time, if you want to contribute to OpenCV, you will need this.

Compiling from source may seem a little complicated at first, but once you succeeded in it, there is nothing complicated.

First we will install some dependencies. Some are compulsory, some are optional. Optional dependencies, you can leave if you don’t want.

We need CMake to configure the installation, GCC for compilation, Python-devel and Numpy for creating Python extensions etc.

Above dependencies are sufficient to install OpenCV in your fedora machine. But depending upon your requirements, you may need some extra dependencies. A list of such optional dependencies are given below. You can either leave it or install it, your call :)

OpenCV comes with supporting files for image formats like PNG, JPEG, JPEG2000, TIFF, WebP etc. But it may be a little old. If you want to get latest libraries, you can install development files for these formats.

Several OpenCV functions are parallelized with Intel’s Threading Building Blocks (TBB). But if you want to enable it, you need to install TBB first. ( Also while configuring installation with CMake, don’t forget to pass <span class="pre">-D</span> <span class="pre">WITH_TBB=ON</span>. More details below.)

OpenCV uses another library Eigen for optimized mathematical operations. So if you have Eigen installed in your system, you can exploit it. ( Also while configuring installation with CMake, don’t forget to pass <span class="pre">-D</span> <span class="pre">WITH_EIGEN=ON</span>. More details below.)

If you want to build documentation ( Yes, you can create offline version of OpenCV’s complete official documentation in your system in HTML with full search facility so that you need not access internet always if any question, and it is quite FAST!!! ), you need to install Sphinx (a documentation generation tool) and pdflatex (if you want to create a PDF version of it). ( Also while configuring installation with CMake, don’t forget to pass <span class="pre">-D</span> <span class="pre">BUILD_DOCS=ON</span>. More details below.)

Next we have to download OpenCV. You can download the latest release of OpenCV from sourceforge site. Then extract the folder.

Or you can download latest source from OpenCV’s github repo. (If you want to contribute to OpenCV, choose this. It always keeps your OpenCV up-to-date). For that, you need to install Git first.

It will create a folder OpenCV in home directory (or the directory you specify). The cloning may take some time depending upon your internet connection.

Now we have installed all the required dependencies, let’s install OpenCV. Installation has to be configured with CMake. It specifies which modules are to be installed, installation path, which additional libraries to be used, whether documentation and examples to be compiled etc. Below command is normally used for configuration (executed from build folder).

You can specify as many flags you want, but each flag should be preceded by -D.

So in this tutorial, we are installing OpenCV with TBB and Eigen support. We also build the documentation, but we exclude Performance tests and building samples. We also disable GPU related modules (since we use OpenCV-Python, we don’t need GPU related modules. It saves us some time).

(All the below commands can be done in a single cmake statement, but it is split here for better understanding.)

Each time you enter cmake statement, it prints out the resulting configuration setup. In the final setup you got, make sure that following fields are filled (below is the some important parts of configuration I got). These fields should be filled appropriately in your system also. Otherwise some problem has happened. So check if you have correctly performed above steps.

Many other flags and settings are there. It is left for you for further exploration.

Installation is over. All files are installed in <span class="pre">/usr/local/</span> folder. But to use it, your Python should be able to find OpenCV module. You have two options for that.

But you will have to do this every time you install OpenCV.

Then open opencv/build/doc/_html/index.html and bookmark it in the browser.