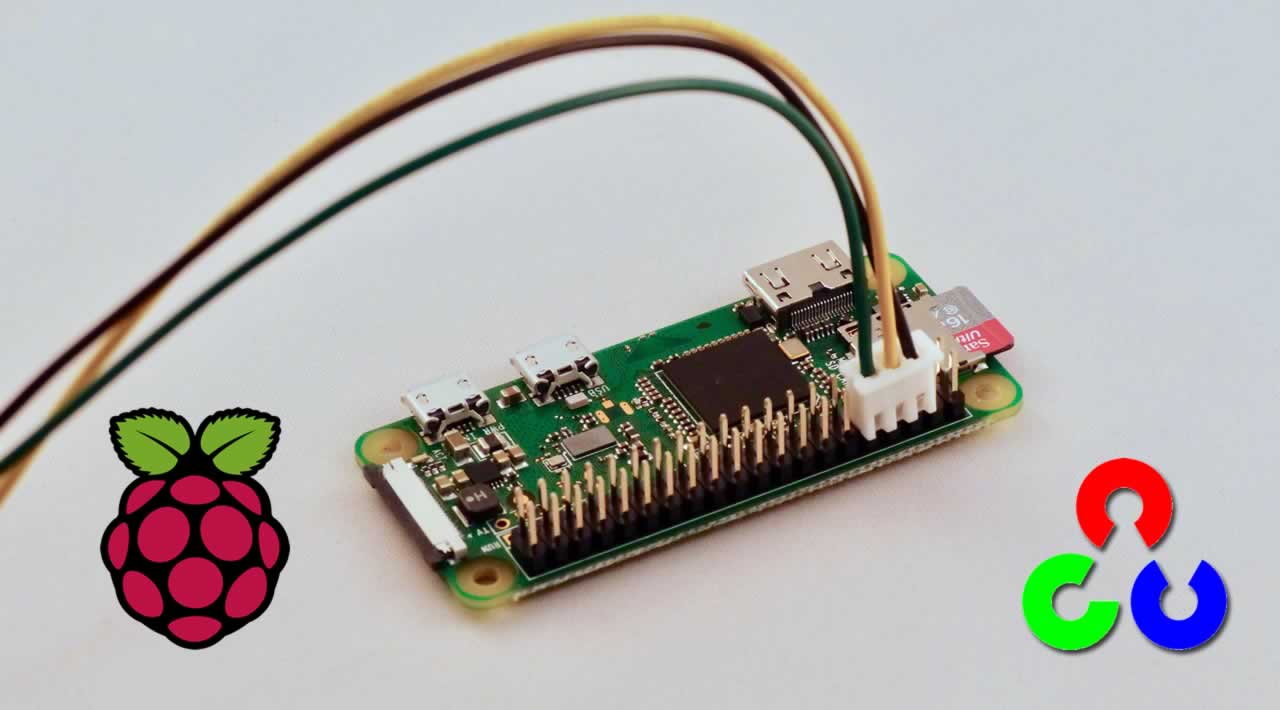 In this tutorial you will learn how to install OpenCV 4 on the Raspberry Pi 4 and Raspbian Buster.

You will learn how to install OpenCV 4 on Raspbian Buster via both:

To learn more about installing OpenCV 4 on the Raspberry Pi 4 and Raspbian Buster, just keep reading.

In this tutorial we will install and test OpenCV 4 on *Raspbian Buster *in five simple, easy-to-follow steps.

If you’ve ever compiled OpenCV from scratch before, you know that the process is especially time-consuming and even painstakingly frustrating if you miss a key step or if you are new to Linux and Bash.

Installing OpenCV via pip is easier than ever. In fact, you can be up and running (Step #1 – Step #4a) in less than 10 minutes.

But what’s the catch?

Using pip to install OpenCV is great, but for some projects (including many educational projects on PyImageSearch.com and in my books/courses) you might want the complete install of OpenCV (which the pip install won’t give you).

Don’t worry, I’ve got you covered in Step #4b below — you’ll learn to use CMake and Make to compile OpenCV 4 on BusterOS from scratch.

Before we begin: Grab your Raspberry Pi and flash BusterOS to your microSD

Let’s review the hardware requirements for this tutorial:

If you don’t already have a Raspberry Pi 4, I highly recommend CanaKits (which are available on Amazon) and directly through Canakit’s website. Most of their kits come with a Raspberry Pi, power adapter, microSD, microSD adapter, heatsinks, and more! 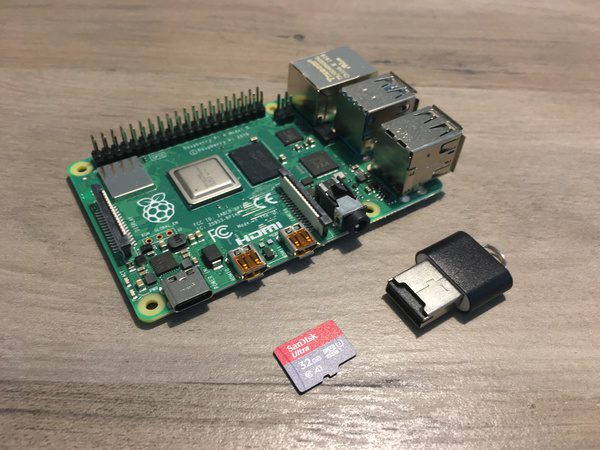 Once you have the hardware ready, you’ll need to flash a fresh copy of the Raspbian Buster operating system to the microSD card. 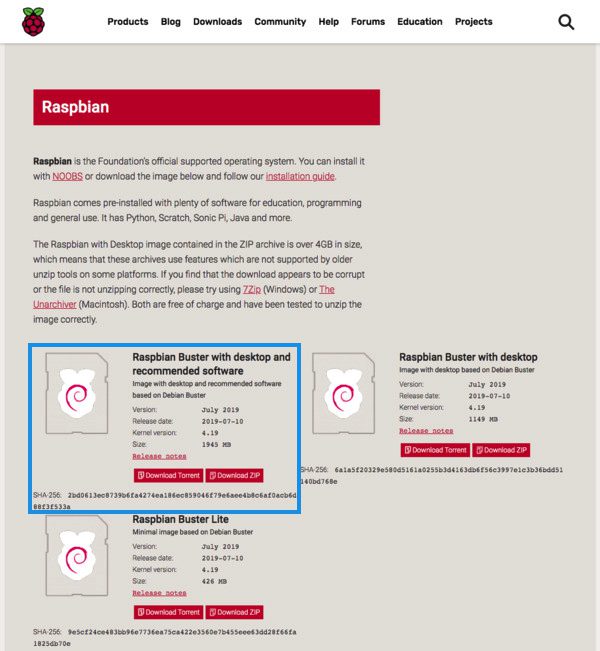 Figure 2: Download Raspbian Buster for your Raspberry Pi and OpenCV 4.

After downloading the Raspbian Buster .img file you can flash it to your micro-SD card using Etcher: 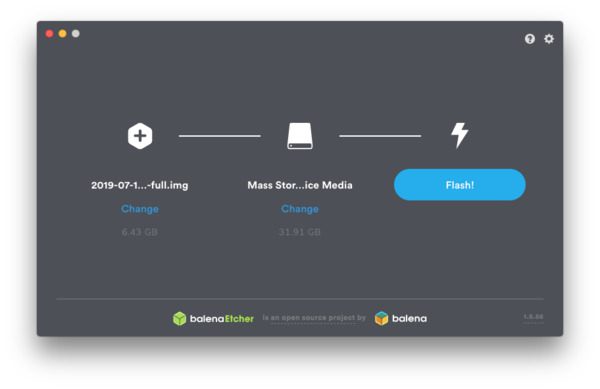 Figure 3: Flash Raspbian Buster with Etcher. We will use BusterOS to install OpenCV 4 on our Raspberry Pi 4.

After a few minutes the flashing process should be complete — slot the micro-SD card into your Raspberry Pi 4 and then boot.

From there you can move on to the rest of the OpenCV install steps in this guide.

For the remainder of this tutorial I’ll be making the following assumptions:

Go ahead and insert your microSD into your Raspberry Pi and boot it up with a screen attached.

Once booted, configure your WiFi/ethernet settings to connect to the internet (you’ll need an internet connection to download and install required packages for OpenCV).

From there you can use SSH as I have done, or go ahead and open a terminal.

The first step is to run, raspi-config and expand your filesystem:

And then select the “7 Advanced Options” menu item: 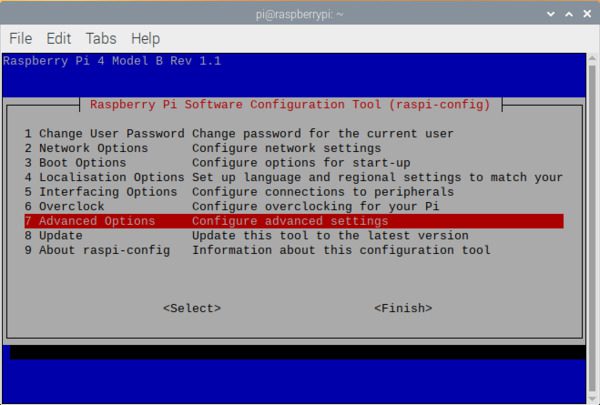 Figure 4: The raspi-config configuration screen for Raspbian Buster. Select 7 Advanced Options so that we can expand our filesystem.

Followed by selecting “A1 Expand filesystem”: 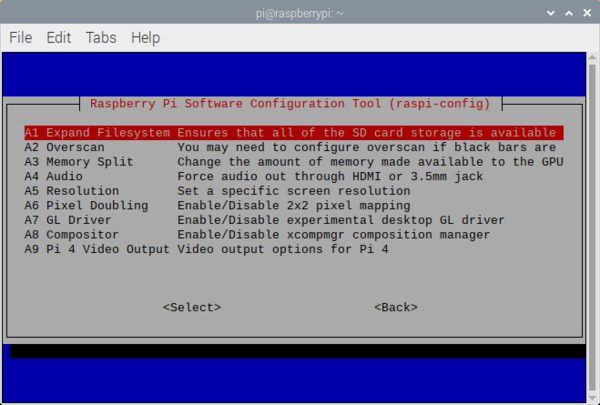 Figure 5: The A1 Expand Filesystem menu item allows you to expand the filesystem on your microSD card containing the Raspberry Pi Buster operating system. Then we can proceed to install OpenCV 4.

Once prompted, you should select the first option, “A1 Expand File System”, hit enter on your keyboard, arrow down to the “” button, and then reboot your Pi — you may be prompted to reboot, but if you aren’t you can execute:

After rebooting, your file system should have been expanded to include all available space on your micro-SD card. You can verify that the disk has been expanded by executing df -h and examining the output:

As you can see, my Raspbian filesystem has been expanded to include all 32GB of the micro-SD card.

However, even with my filesystem expanded, I have already used 15% of my 32GB card.

While it’s not required, I would suggest deleting both Wolfram Engine and LibreOffice to reclaim ~1GB of space on your Raspberry Pi:

The following commands will update and upgrade any existing packages, followed by installing dependencies, I/O libraries, and optimization packages for OpenCV:

The first step is to update and upgrade any existing packages:

We then need to install some developer tools, including CMake, which helps us configure the OpenCV build process:

Next, we need to install some image I/O packages that allow us to load various image file formats from disk. Examples of such file formats include JPEG, PNG, TIFF, etc.:

Just as we need image I/O packages, we also need video I/O packages. These libraries allow us to read various video file formats from disk as well as work directly with video streams:

The OpenCV library comes with a sub-module named highgui which is used to display images to our screen and build basic GUIs. In order to compile the highgui module, we need to install the GTK development library and prerequisites:

Many operations inside of OpenCV (namely matrix operations) can be optimized further by installing a few extra dependencies:

These optimization libraries are especially important for resource-constrained devices such as the Raspberry Pi.

The following pre-requisites are for Step #4a and they certainly won’t hurt for Step #4b either. They are for HDF5 datasets and Qt GUIs:

If you’re working with a fresh install of the OS, it is possible that these versions of Python are already at the newest version (you’ll see a terminal message stating this).

We’ll be using Python virtual environments, a best practice when working with Python.

Of course, there are alternatives for managing virtual environments and packages (namely Anaconda/conda). I’ve used/tried them all, but have settled on pip, virtualenv, and virtualenvwrapper as the preferred tools that I install on all of my systems. If you use the same tools as me, you’ll receive the best support from me.

You can install pip using the following commands:

Once both virtualenv and virtualenvwrapper have been installed, open up your ~/.bashrc file:

…and append the following lines to the bottom of the file: 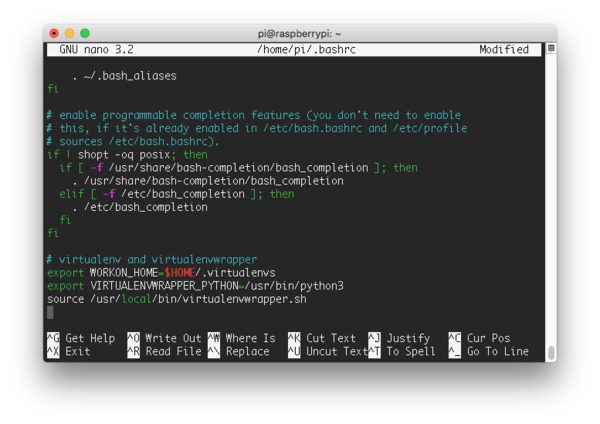 From there, reload your ~/.bashrc file to apply the changes to your current bash session:

Next, create your Python 3 virtual environment:

You can name the virtual environment whatever you want, but I use cv as the standard naming convention here on PyImageSearch.

If you have a Raspberry Pi Camera Module attached to your RPi, you should install the *PiCamera API *now as well:

Step #4(a or b): Decide if you want the 1-minute quick install or the 2-hour complete install

From here you need to make a decision about the rest of your install. There are two options.

In a matter of seconds, you can pip install OpenCV into the cv virtual environment:

If you watch the terminal output of the above screenshot carefully you’ll see that OpenCV 3.4 rather than OpenCV 4 was installed?

At the time of this writing, PiWheels has not been updated with pre-complied OpenCV 4 binaries for Raspbian Buster. PiWheels normally lags slightly behind the latest version of OpenCV, likely to ensure compatibility across the major Raspbian releases. Once OpenCV 4 has been released for PiWheels I will update this section.

That’s really all there is to it. You may skip to Step #5 now to test your install.

Step #4b: Compile OpenCV 4 from source

This option installs the full install of OpenCV including patented (“Non-free”) algorithms.

Note: Do not follow Step #4b if you followed Step #4a.

Let’s go ahead and download the OpenCV source code for both the opencv and opencv_contrib repositories, followed by unarchiving them:

For this blog post, we’ll be using OpenCV 4.1.1; however, as newer versions of OpenCV are released you can update the corresponding version numbers.

Before you start the compile you must increase your SWAP space. Increasing the SWAP will enable you to compile OpenCV with all four cores of the Raspberry Pi _(and _without the compile hanging due to memory exhausting).

Go ahead and open up your /etc/dphys-swapfile file:

…and then edit the CONF_SWAPSIZE variable:

Notice that I’m increasing the swap from 100MB to 1024MB. This is critical to compiling OpenCV with multiple cores on Raspbian Buster.

We’re now ready to compile and install the full, optimized OpenCV library on the Raspberry Pi 4.

Ensure you are in the cv virtual environment using the workon command:

Then, go ahead and install NumPy (an OpenCV dependency) into the Python virtual environment:

And from there configure your build:

There are four CMake flags I’d like to bring to your attention:

I’d like to take a second now to bring awareness to a common pitfall for beginners: 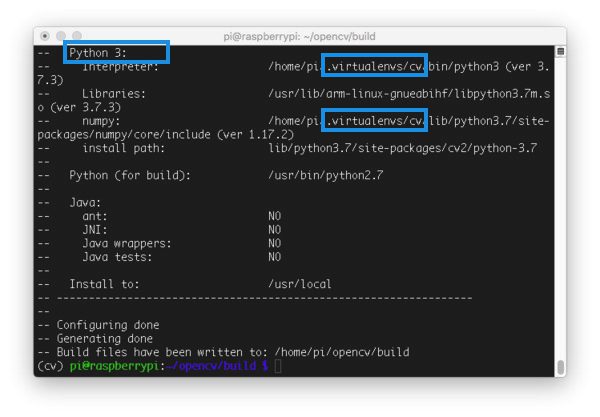 Notice how the Interpreter , Libraries , numpy , and packages path variables have been properly set. Each of these refers to our cv virtual environment.

Now go ahead and scroll up to ensure that the “Non-Free algorithms” are set to be installed: 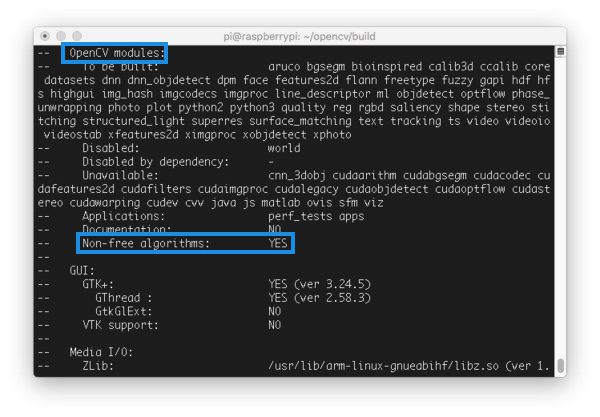 As you can see, “Non-free algorithms” for OpenCV 4 will be compiled + installed.

Now that we’ve prepared for our OpenCV 4 compilation, it is time to launch the compile process using all four cores: 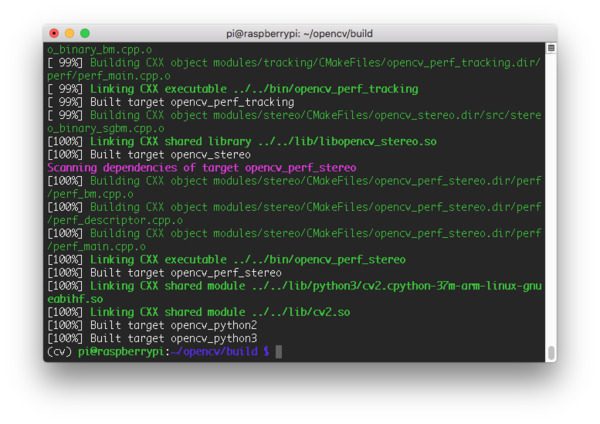 Running make could take anywhere from 1-4 hours depending on your Raspberry Pi hardware (this tutorial is compatible with the Raspberry Pi 3B, 3B+, and 4). The Raspberry Pi 4 is the fastest at the time of this writing.

Assuming OpenCV compiled without error (as in my screenshot above), you can install your optimized version of OpenCV on your Raspberry Pi:

_Don’t forget to go back to your /etc/dphys-swapfile file and:

Sym-link your OpenCV 4 on the Raspberry Pi

Symbolic links are a way of pointing from one directory to a file or folder elsewhere on your system. For this sub-step, we will sym-link the cv2.so bindings into your cv virtual environment.

Let’s proceed to create our sym-link. Be sure to use “tab-completion” for all paths below (rather than copying these commands blindly):

Keep in mind that the exact paths may change and you should use “tab-completion”.

As a quick sanity check, access the cv virtual environment, fire up a Python shell, and try to import the OpenCV library:

Congratulations! You’ve just installed an OpenCV 4 on your Raspberry Pi.

Learn Free how to create a virtual pen and eraser with python and OpenCV with source code and complete guide. This entire application is built fundamentally on contour detection. It can be thought of as something like closed color curves on compromises that have the same color or intensity, it's like a blob. In this project we use color masking to get the binary mask of our target color pen, then we use the counter detection to find the location of this pen and the contour to find it.

Keras vs. OpenCV - Differences Between Keras and OpenCV

Learn what is Keras and OpenCV with their applications. See Keras vs OpenCv to understand differences between OpenCv and keras for proper understanding.

In this Computer Vision for Dummies with OpenCV, you will be working on an end-to-end project to understand computer vision. You will also be working on the basics of image processing with Python. We will also give you some ideas about OpenCV library basics and will do some practical task using OpenCV

OpenCV Python Tutorial: Computer Vision With OpenCV In Python: Learn Vision Includes all OpenCV Image Processing Features with Simple Examples. Face Detection, Face Recognition. Computer Vision is an AI based, that is, Artificial Intelligence based technology that allows computers to understand and label images. Use OpenCV to work with image files. Create Face Detection Software. Detect Objects, including corner, edge, and grid detection techniques with OpenCV and Python. Use Python and Deep Learning to build image classifiers. Use Python and OpenCV to draw shapes on images and videos. Create Color Histograms with OpenCV

In this OpenCV Python Tutorial article, we will be covering various aspects of Computer Vision using OpenCV in Python. OpenCV has been a vital part in the development of software for a long time. Learning OpenCV is a good asset to the developer to improve aspects of coding and also helps in building a software development career.