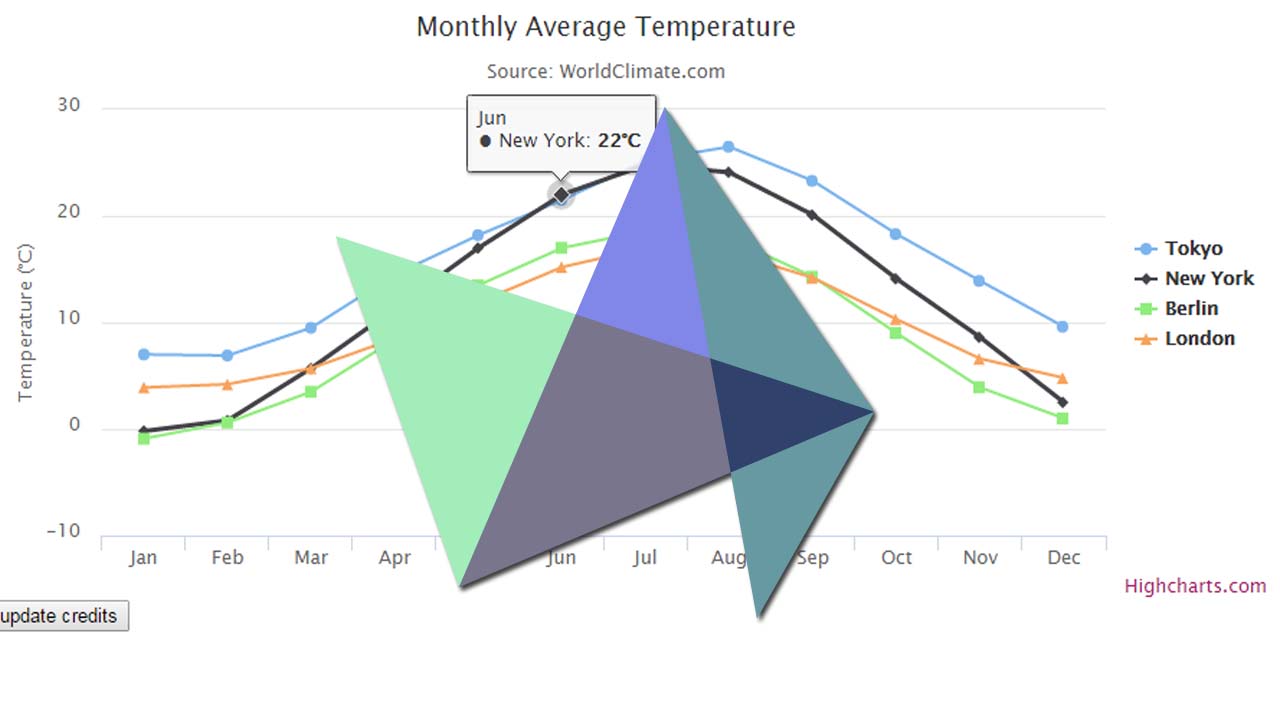 There are two ways of adding Highcharts-Vue wrapper to your project:

Registering globally as a plugin

The way described below is recommended when wanted to make a wrapper component available from everywhere in your app. In your main app file should have Vue and Highcharts-Vue packages imported:

Next, you can register it as a plugin in your Vue object:

Registering locally in your component

This option is recommended for direct use in specific components of your app. First, you should import the Chart component object from Highcharts-Vue package in your component file:

Then, you've to register it in your Vue instance configuration, namely in components section:

NOTE: If you would like to use Highcharts-Vue wrapper by attaching it using <script> tag in your <head> section of HTML document, of course it is possible and you should use one of .js files from dist of this package directory. After that, the HighchartsVue object should be available from window scope. Here is the example with this way of implementation: JSFiddle example

If you've done one of the above (importing and registering the wrapper), it allows you to use the Highcharts-Vue component in your app, just by adding <highcharts> html element, and passing chart configuration object by its :options parameter, which is required:

To use any of Highcharts modules, you're obligated to import that module to your file, as well as Highcharts package itself and add that module by passing Highcharts to it, for example:

Highcharts-Vue wrapper uses chart constructor by default, so if you need to implement stockChart or mapChart, just add stock or map module as described above and use :constructor-type parameter in your html component element:

If you won't install a package with all maps, there is an option to choose necessary map from Highmaps collection collection and copy a map data into a new file in your project. Then just import it wherever you want, and use it in the same way like above.

The Demo app included in this repostory shows the second approach.

If you would like to use global component tag name other than <highcharts>, you could achieve that by passing object with tagName: [TAG_NAME] pair as an option argument when registering the plugin, for example:

It allows you to use:

If you need to use callback from Highcharts.chart(renderTo, options [, callback]) function, you could pass it by :callback parameter through HTML component element:

Then, someFunction will be called when chart is loaded.

You can access the Chart object instance if necessary (e.g when need to get some data or use any of Chart.prototype functions), by calling specific Vue component instance chart field, but it is not supported to update the chart using its built-in functions, because that could cause a problems with data synchronization between your app and the chart itself (it disturbs conception of using wrappers). The most recommended way of implementing it, is to use it in the way presented in demo app.

If you would like to use Highcharts.setOptions() method to define some parameters which would be set globally on all of charts, we recommend you to use it in the main file of your app, although there should be Highcharts package imported before.

Occasionally you'll want to create your charts basing on specific Highcharts version for some reason. Then you can set it up in two different ways, depending on your individual needs.

The first one is by setting a Highcharts instance while registering a wrapper component as a global plugin, by passing it through the options of Vue's install function, as below:

After doing it, all charts will be generated basing on passed instance.

A second way is to pass the Highcharts instance through the props of highcharts component. Then, as a result, only that chart will be generated basing on passed instance:

Note that both ways of usage are optional, because wrapper automatically uses available Highcharts instance by default from peer dependency.

If you would like to play with live app created with Highcharts Vue wrapper, or just want to see how it everything should looks like, this repository includes the demo example, which you can simply run locally on your machine. To achieve that, clone this repository, open terminal/console and enter these two commands from the repo directory level:

Here is the list of all allowed props allowed to pass directly to your <highcharts> component instance, which wrapper is able to handle.

NOTE: That can cause a decrease of performance while processing a big amount of data, because copying source data is much expensive, and then it's recommended to disable that option by setting it to false. |

How to Maintain Performance with Big Datasets Using Highcharts. js and Vue. Sometimes you just need to show big datasets in your project. However, the library that you've used so far, as soon as you start to add data, becomes clunky and slow.