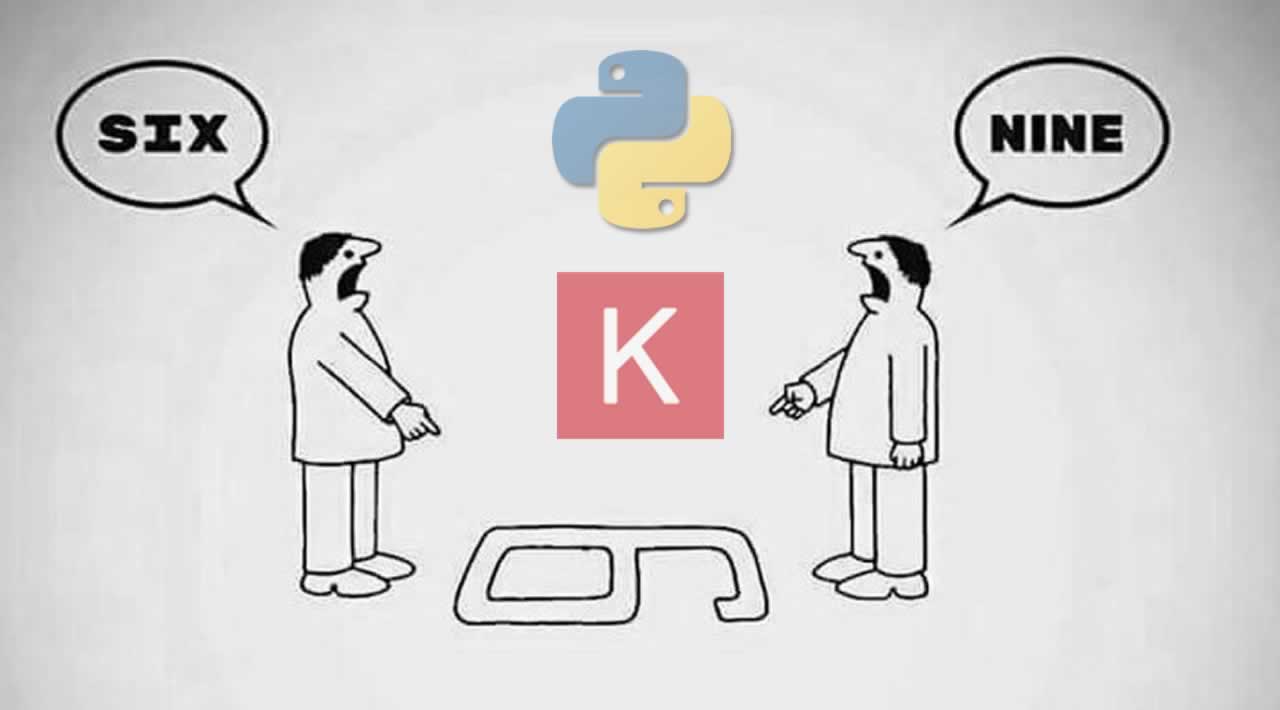 We use the keras library for training the model in this tutorial. Keras is a high-level library in Python that is a wrapper over TensorFlow, CNTK and Theano. By default, Keras uses a TensorFlow backend by default, and we’ll use the same to train our model. 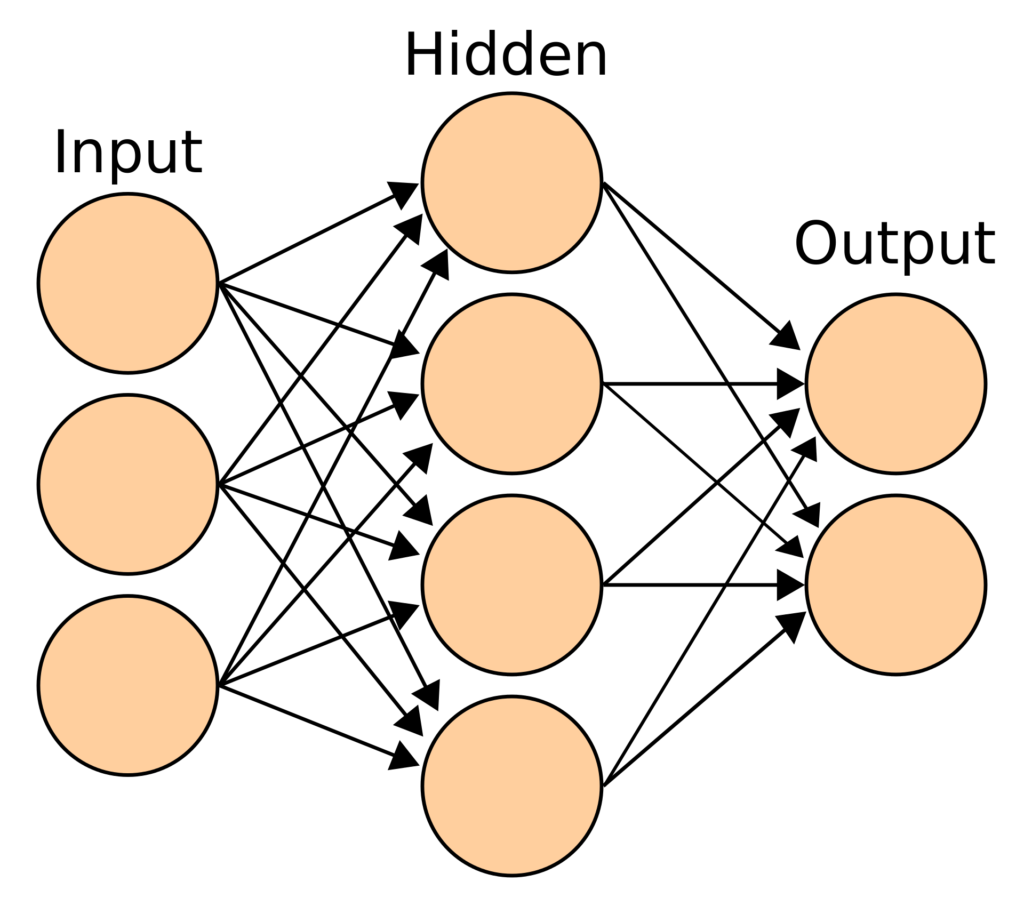 An artificial neural network is a mathematical model that converts a set of inputs to a set of outputs through a number of hidden layers. An ANN works with hidden layers, each of which is a transient form associated with a probability. In a typical neural network, each node of a layer takes all nodes of the previous layer as input. A model may have one or more hidden layers.

ANNs receive an input layer to transform it through hidden layers. An ANN is initialized by assigning random weights and biases to each node of the hidden layers. As the training data is fed into the model, it modifies these weights and biases using the errors generated at each step. Hence, our model “learns” the pattern when going through the training data.

If we were to train a regular neural network based on image data, we’d have to provide a long list of inputs, each of which would be connected to the next hidden layer. This makes the process difficult to scale up.

In a convoluted neural network (CNN), the layers are arranged in a 3D array (X-axis coordinate, Y-axis coordinate and color). Consequently, a node of the hidden layer would only be connected to a small region in the vicinity of the corresponding input layer, making the process far more efficient than a traditional neural network. CNNs, therefore, are popular when it comes to working with images and videos.

The various types of layers in a CNN are as follows:

As you may have realized by now, we need labelled data to train any model. In this tutorial, we’ll use the MNIST dataset of handwritten digits. This dataset is a part of the Keras package. It contains a training set of 60000 examples, and a test set of 10000 examples. We’ll train the data on the training set and validate the results based on the test data. Further, we’ll create an image of our own to test whether the model can correctly predict it.

First, let’s import the MNIST dataset from Keras. The .load_data() method returns both the training and testing datasets:

Let’s try to visualize the digits in the dataset. If you’re using Jupyter notebooks, use the following magic function to show inline Matplotlib plots:

Next, import the pyplot module from matplotlib and use the .imshow() method to display the image: 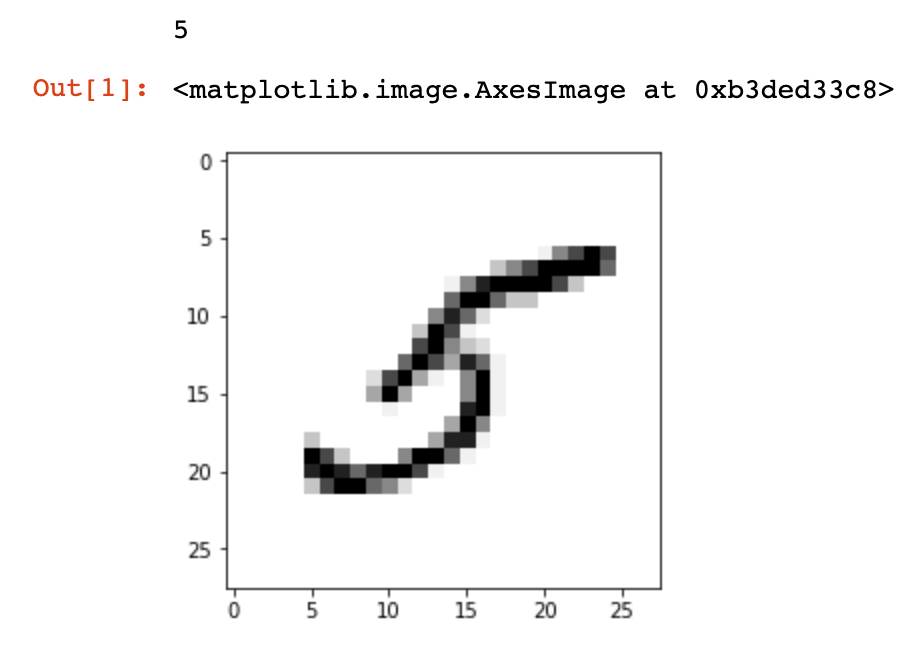 Let’s verify the sizes of the training and testing datasets:

Notice that each image has the dimensions 28 x 28:

Next, we may also wish to explore the dependent variable, stored in y_train. Let’s print all labels until the digit that we visualized above:

Now that we’ve seen the structure of the data, let’s work on it further before creating the model.

To work with the Keras API, we need to reshape each image to the format of (M x N x 1). We’ll use the .reshape() method to perform this action. Finally, normalize the image data by dividing each pixel value by 255 (since RGB value can range from 0 to 255):

Next, we need to convert the dependent variable in the form of integers to a binary class matrix. This can be achieved by the to_categorical() function:

We’re now ready to create the model and train it!

The model design process is the most complex factor, having a direct impact on the performance of the model. For this tutorial, we’ll use this design from the Keras Documentation.

To create the model, we first initialize a sequential model. It creates an empty model object. The first step is to add a convolutional layer which takes the input image:

A “relu” activation stands for “Rectified Linear Units”, which takes the max of a value or zero. Next, we add another convolutional layer, followed by a pooling layer:

Next, we add a “dropout” layer. While neural networks are trained on huge datasets, a problem of overfitting may occur. To avoid this issue, we randomly drop units and their connections during the training process. In this case, we’ll drop 25% of the units:

Next, we add a flattening layer to convert the previous hidden layer into a 1D array:

Once we’ve flattened the data into a 1D array, we can add a dense hidden layer, which is normal to a traditional neural network. Next, add another dropout layer before adding a final dense layer which classifies the data:

The “softmax” activation is used when we’d like to classify the data into a number of pre-decided classes.

In the model design process, we’ve created an empty model without an objective function. We need to compile the model and specify a loss function, an optimizer function and a metric to assess model performance.

We need to use a sparse_categorical_crossentropy loss function in case we have an integer-dependent variable. For a vector-based dependent variable like a ten-size array as the output of each test case, use categorical_crossentropy. In this example, we’ll use the adam optimizer. The metric is the basis of assessment of our model performance, though it’s only for us to judge and isn’t used in the training step:

Finally, save the model once the training is complete to use its results at a later stage:

When we run the code above, the following output is shown as the model runs. It takes about ten minutes in a 2018 Macbook Air running Jupyter notebooks:

At the end of the final epoch, the accuracy of the test dataset is 99.19%. It’s difficult to comment on how high the accuracy needs to be. For a test run, accuracy over 99% is very good. However, there’s a lot of scope for improvement by tweaking the model parameters. Here’s a submission from a digit recognizer contest on Kaggle that reached 99.7% accuracy.

Now that the model is ready, let’s use a custom image to assess the performance of the model. I’ve hosted a custom 28×28 digit on Imgur. First, let’s read the image using the imageio library and explore how the input data looks:

Next, convert the RGB values to grayscale. We can then use the .imshow() method as explored above to display the image: 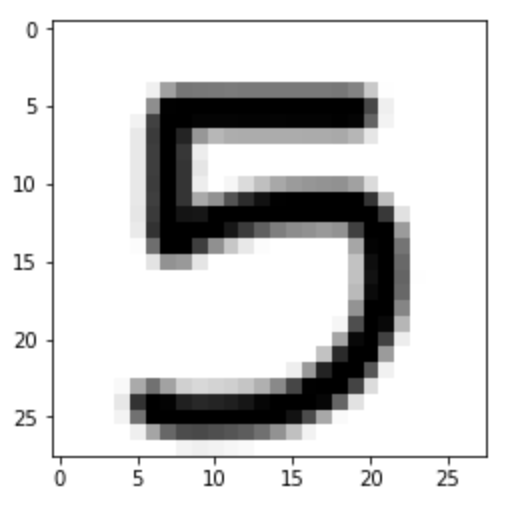 Next, reshape the image and normalize the values to make it ready to be used in the model that we’ve just created:

Load the model from the saved file using the load_model() function and predict the digit using the .predict() method:

The model correctly predicts the digit shown in the image:

In this tutorial, we created a neural network with Keras using the TensorFlow backend to classify handwritten digits. Although we reached an accuracy of 99%, there are still opportunities for improvement. We also learned how to classify custom handwritten digits, which were not a part of the test dataset. This tutorial, however, has just scratched the field of artificial neural networks. There are endless uses of neural networks that are only limited by our imagination.