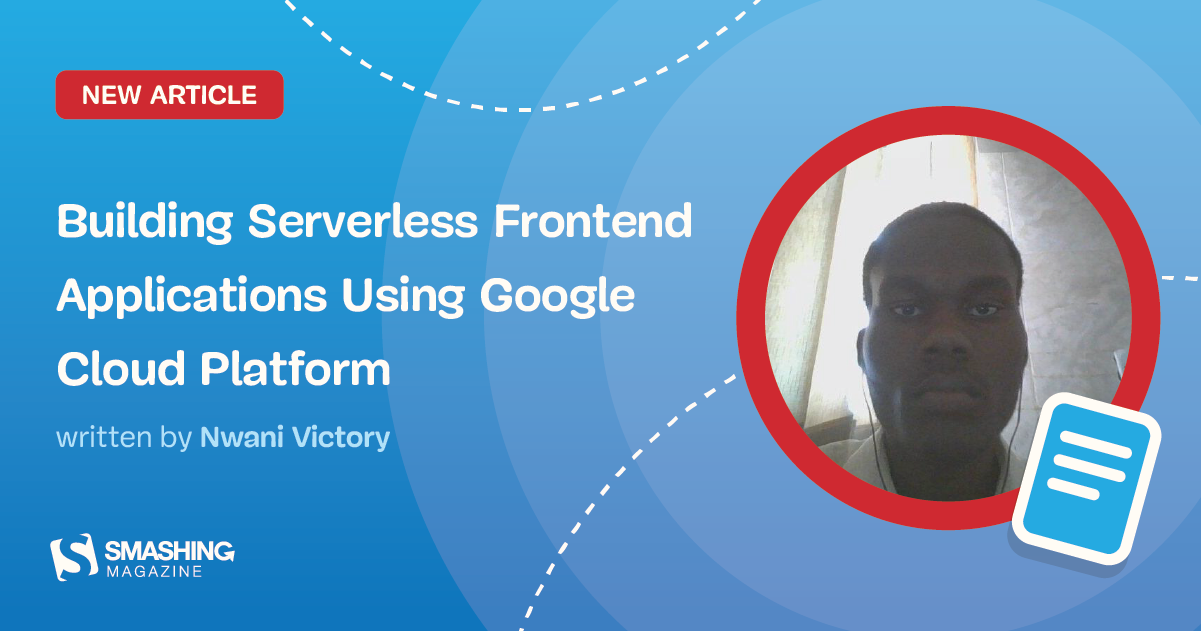 You will learn what serverless applications are, how they are used on the Google Cloud, and also scenarios in which they can be used in a front-end application.

Recently, the development paradigm of applications has begun to shift from manually having to deploy, scale and update the resources used within an application to relying on third-party cloud service providers to do most of the management of these resources.

As a developer or an organization that wants to build a market-fit application within the quickest time possible, your main focus might be on delivering your core application service to your users while you spend a smaller amount of time on configuring, deploying and stress testing your application. If this is your use case, handling the business logic of your application in a serverless manner might your best option. But how?

Note: To benefit from what will be covered here, you need to have experience working with React. No prior experience in serverless applications is required.

Before we begin, let’s understand what serverless applications really are and how the serverless architecture can be used when building an application within the context of a front-end engineer.

Serverless applications are applications broken down into tiny reusable event-driven functions, hosted and managed by third-party cloud service providers within the public cloud on behalf of the application author. These are triggered by certain events and are executed on demand. Although the “less” suffix attached to the serverless word indicates the absence of a server, this is not 100% the case. These applications still run on servers and other hardware resources, but in this case, those resources are not provisioned by the developer but rather by a third-party cloud service provider. So they are server-less to the application author but still run on servers and are accessible over the public internet.

While there are a ton of reasons why you might consider leveraging serverless applications or Functions As A Service (FAAS) as they are called, for your front-end application, here are some very notable reasons that you should consider:

When making use of serverless applications, every developer has a vast array of cloud providers within the public cloud to make use of. Within the context of this article we will focus on serverless applications on the Google Cloud Platform — how they are created, managed, deployed and how they also integrate with other products on the Google Cloud. To do this, we will add new functionalities to this existing React application while working through the process of:

The Google Cloud allows developers to create serverless applications using the Cloud Functions and runs them using the Functions Framework. As they are called, Cloud functions are reusable event-driven functions deployed to the Google Cloud to listen for specific trigger out of the six available event triggers and then perform the operation it was written to execute.

Cloud functions which are short-lived, (with a default execution timeout of 60 seconds and a maximum of 9 minutes) can be written using JavaScript, Python, Golang and Java and executed using their runtime. In JavaScript, they can be executed using only using some available versions of the Node runtime and are written in the form of CommonJS modules using plain JavaScript as they are exported as the primary function to be run on the Google Cloud.

An example of a cloud function is the one below which is an empty boilerplate for the function to handle a user’s data.

Above we have a module which exports a function. When executed, it receives the request and response arguments similar to a HTTP route.

Cloud functions can be executed locally during development by installing the @google-cloud/functions-framework package within the same folder where the written function is placed or doing a global installation to use it for multiple functions by running npm i -g @google-cloud/functions-framework from your command line. Once installed, it should be added to the package.json script with the name of exported module similar to the one below:

Above we have a single command within our scripts in the package.json file which runs the functions-framework and also specifies the firestoreFunction as the target function to be run locally on port 8000.

We can test this function’s endpoint by making a GET request to port 8000 on localhost using curl. Pasting the command below in a terminal will do that and return a response.

The command above makes a request with a GET HTTP method and responds with a 200 status code and an object data containing the name added in the query.

Out of the available deployment methods,, one quick way to deploy a cloud function from a local machine is to use the cloud Sdk after installing it. Running the command below from the terminal after authenticating the gcloud sdk with your project on the Google Cloud, would deploy a locally created function to the Cloud Function service.

Using the explained flags below, the command above deploys an HTTP triggered function to the google cloud with the name “demo-function”.

Note: Making a function allow unauthenticated requests means that anybody with your function’s endpoint can also make requests without you granting it. To mitigate this, we can make sure the endpoint stays private by using it through environment variables, or by requesting authorization headers on each request.

Now that our demo-function has been deployed and we have the endpoint, we can test this function as if it was being used in a real-world application using a global installation of autocannon. Running autocannon -d=5 -c=300 CLOUD_FUNCTION_URL from the opened terminal would generate 300 concurrent requests to the cloud function within a 5 seconds duration. This more than enough to start the cloud function and also generate some metrics that we can explore on the function’s dashboard.

Note: A function’s endpoint will be printed out in the terminal after deployment. If not the case, run _gcloud function describe FUNCTION_NAME_ from the terminal to get the details about the deployed function including the endpoint.

Using the metrics tab on the dashboard, we can see a visual representation from the last request consisting of how many invocations were made, how long they lasted, the memory footprint of the function and how many instances were spun to handle the requests made.

A closer look at the Active Instances chart within the image above shows the horizontal scaling capacity of the Cloud Functions, as we can see that 209 instances were spun up within a few seconds to handle the requests made using autocannon.

Every function deployed to the Google cloud has a log and each time this function is executed, a new entry into that log is made. From the Log tab on the function’s dashboard, we can see a list of all the logs entries from a cloud function.

Below are the log entries from our deployed demo-function created as a result of the requests we made using autocannon.

Each of the log entry above shows exactly when a function was executed, how long the execution took and what status code it ended with. If there are any errors resulting from a function, details of the error including the line it occurred will be shown in the logs here.

The Logs Explorer on the Google Cloud can be used to see more comprehensive details about the logs from a cloud function.