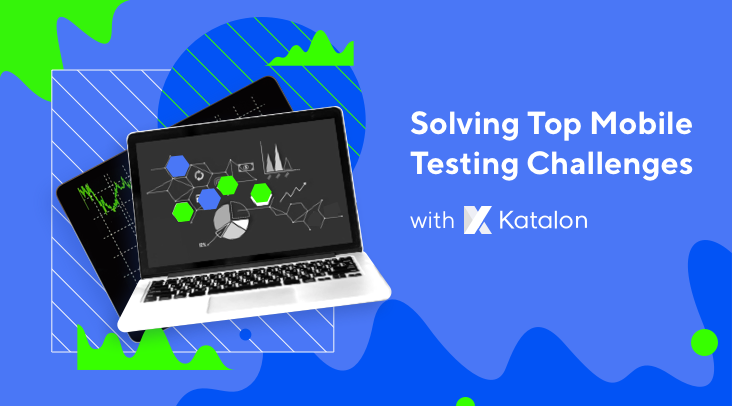 Mobile users expect to receive high-quality app experience along with timely updates and improvements. This is why mobile testing has become a key priority for organizations now more than ever. This article will show you how Katalon could be the right tool to solve that problem.

In 2019, there have been approximately 5.11 billion active mobile users in the world. That is two-thirds of the current population of the world. Consumers’ time spent on social media has also increased by 53% in the United States, resulting in the booming trend in the mobile app market in recent years. 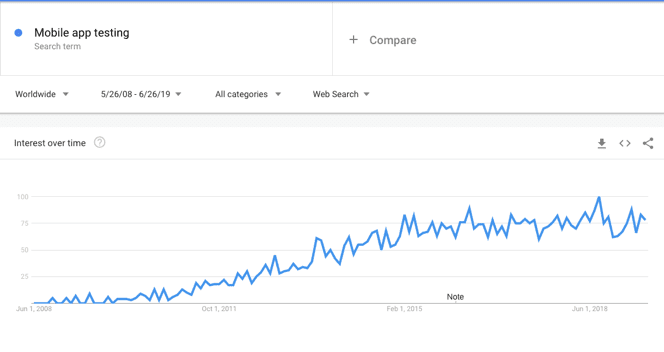 Mobile apps are no longer a sole product – they change how consumers perceive and interact with the digital world. To grasp the immense potential of the mobile commerce market, developers need to invest in a product that not only delivers value to users, but also touches them through multiple platforms and personalized content.

However, creating an application that fulfills these criteria is easier said than done. Mobile users expect to receive high-quality app experience along with timely updates and improvements. This is why mobile testing has become a key priority for organizations now more than ever. It also comes with the challenges of continuously delivering powerful mobile apps that are up and running flawlessly. 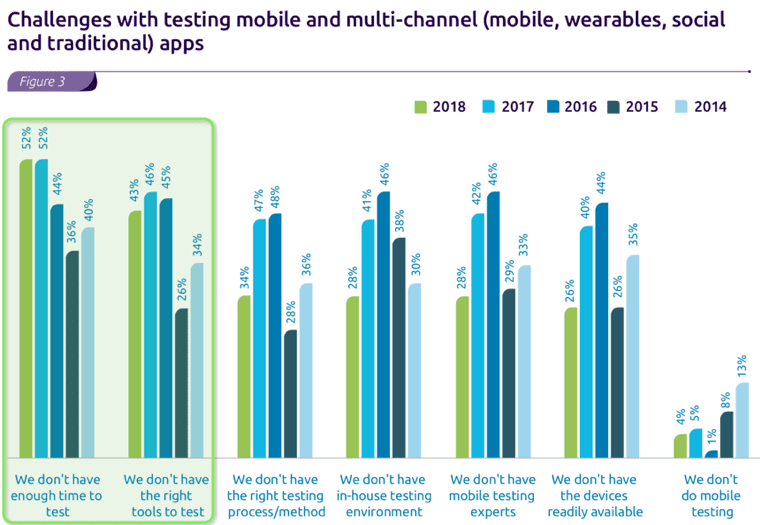 According to the 2018 World Quality Report, the six most common challenges lack these factors when it comes to testing:

This upward change might result from the transition from the traditional Waterfall to Agile/DevOps approach in software development teams. However, despite this quick transformation, mobile testing still faces the lack of testing time and right testing tools.

The lack of testing time is likely due to the pressure of shorter release cycles. This is a consequence of the global fierce competition of not only software products but also mobile devices. Every manager wants to release their software faster in order not to miss the market opportunities and stay ahead of their competitors. The same happens with mobile devices, which leads to the over-diversification in testing devices and platforms. Quality assurance teams, then, have to cover a wide range of testing environments with both new devices and OS versions, which will consume a huge amount of time and effort.

The need for “the right tools to test” sees a gentle decline – yet remains the second most common challenge. This means that even though enterprises have evolved to adapt to the shorter development cycle and have gained more testing expertise, the testing toolsets offered in the market have not evolved that fast to catch up with the trend.

With the mentioned problems above, the minimal requirements for suitable mobile testing tools are:

Katalon Studio (www.katalon.com) is an automated testing tool in the Katalon solution that tackles the problems need to be solved immediately in mobile testing. Here are the benefits you can get from this solution:

Catch up with the most recent testing environments Katalon is known for unceasingly making sure the testing environments are up-to-date and fully covered. Last June, Katalon Studio has released version 6.2.0 with the upgrade of Appium engine to the latest version 1.12.1 which supports iOS 12.2 and Xcode 10.2.

Moreover, in the upcoming 6.3.0 version this July, recording and spying features will also be supported with cloud device platforms such as Saucelabs and BrowserStack. The tool is continuously updated at least one major release per month with several minor builds in between.

Adapt with AUT changes and delivery speed Katalon Studio has been well-known for the spying and recording capabilities, powered by Appium. The tool can not only be utilized for engineers without any programming skills for speeding up test script generation, but also be customized and structured by automation experts for solid test maintenance. In addition, the dual-script interface also enables high collaboration among members with different automation levels in the same project. These functions are designed for automation engineers and teams to be dexterous with the quick changes and delivery speed of AUT.

Seamless integration with Agile and CI/CD tools Last but not least, Katalon Studio has a very diversified set of integrations with Agile, CI/CD, and Cloud services tools. This allows Katalon Studio to easily fit into any working pipeline without changing the current organization’s processes. Teams with Jira as their Application Lifecycle Management (ALM) can leverage the Katalon native integration to manage automation test cases right in Jira platform. Continuous integration tools such as Jenkins, Bamboo, Azure DevOps, or CircleCI can be used to trigger Katalon automation execution and view synthesized reports. Moreover, Katalon also connects to Cloud device providers such as Saucelabs, BrowserStack or Kobiton, utilizing the rich set of cloud devices to achieve high-quality coverage.

To add confidence in adopting Katalon Studio, the tool has recently been honored as a Top Customers’ Choice in Gartner Peer Insights for Software Test Automation.

The demand for quality mobile apps is at an all-time high. Mobile apps developing team must release products that not only functions, but also connects to their consumers. In terms of mobile testing challenges, not having enough time and the right tools to test become the top two challenges. Katalon fulfills the minimum requirements to help overcome these hurdles, not to mention the other four challenges.

For “not having the right testing process/method,” Katalon itself helps define a process that matches the Agile and DevOps methodology. For the lack of “in-house testing environment” and “the devices readily available,” the cloud devices connected from Katalon is an ideal approach. And for “not having mobile testing experts,” Katalon has a global community with evangelists from various channels such as Katalon forum, Gitter, GitHub, StackOverflow, as well as Katalon Support Services, in which users can get solutions for any kind of problems.