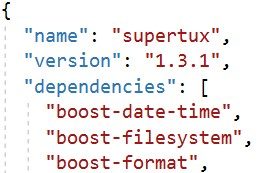 We are excited to announce support for vcpkg binary caching and manifest files. These are key features that have been requested by our users from the beginning, and are intended not only to give everyone more flexibility with the tool, but to enable key scenarios for teams and professional developers.

September is the biggest month for us in the Microsoft C++ team as it’s CppCon month! Our team has many exciting announcements for you this week, including a significant update to the vcpkg library manager for C/C++. We are excited to announce support for vcpkg binary caching and manifest files. These are key features that have been requested by our users from the beginning, and are intended not only to give everyone more flexibility with the tool, but to enable key scenarios for teams and professional developers. Our team is also actively working on versioning support and registries to allow you to install arbitrary library versions and bring your own libraries to vcpkg. These final two features are not ready yet, but expect an announcement on our blog soon with experimental support!

Binary caching allows you to share the compiled libraries you consume locally with your development team and continuous integration system, saving precious build time. Copies of your binaries are cached when they are compiled for the first time by vcpkg. The cache location can be set anywhere from your local filesystem to a remote fileshare or artifact storage location. Binaries can be packaged as .zip or .nupkg. In the .nupkg case, this allows you to use any valid NuGet server to cache your binaries, including Azure Artifacts and GitHub Packages. The benefit of this feature is that you can build your dependencies once, cache them, then install them in seconds on every other machine, continuous integration environment, or container from that point on. If you need to use the exact same dependencies on more than one machine or cloud environment, or if you are setting up a new machine to run builds, this feature will benefit you. You still need to build your dependencies once to populate the cache, but once that’s done, the headers and binaries can be deployed directly to other environments.

The rest of this post goes in-depth on how to get started with the new features in vcpkg.