7 THINGS YOU SHOULD KNOW ABOUT NODEJS 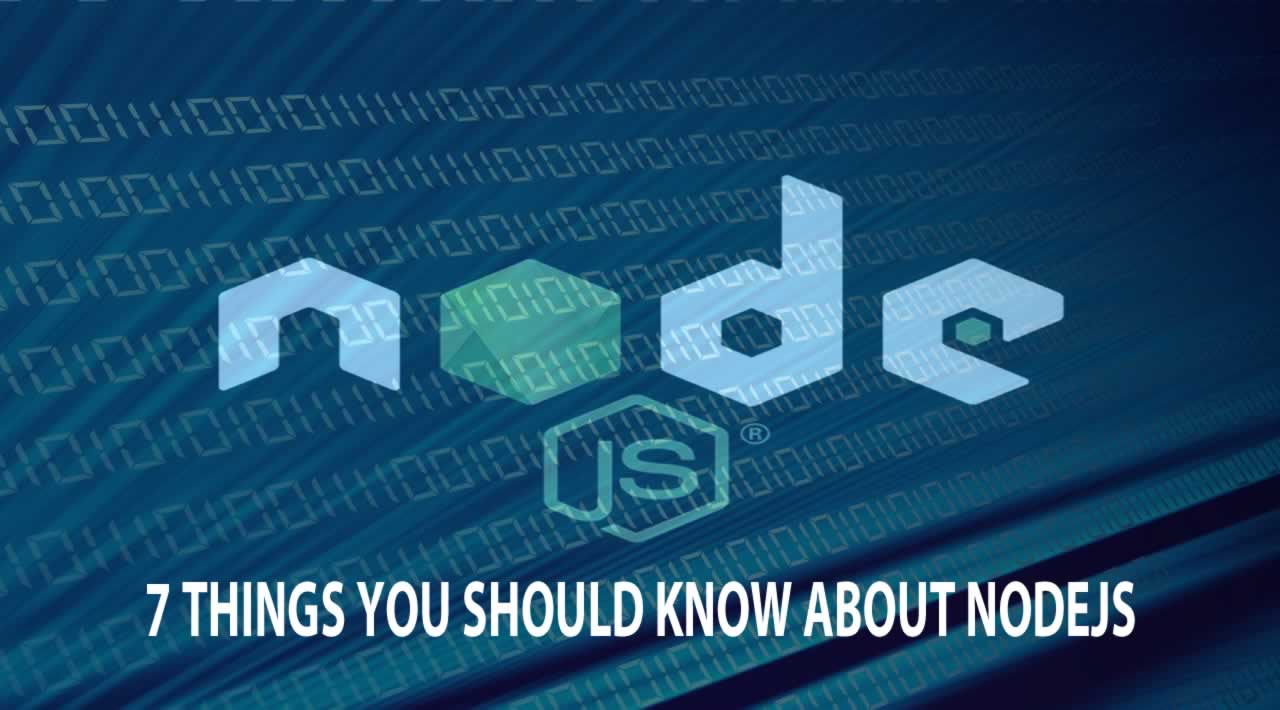 7 THINGS YOU SHOULD KNOW ABOUT NODEJS - As I am, I think you are also new to this Node.JS, so let’s begin with a brief introduction of the same. After searching about it from all sources whatever I found, I would like to share it with you:

7 THINGS YOU SHOULD KNOW ABOUT NODEJS - As I am, I think you are also new to this Node.JS, so let’s begin with a brief introduction of the same. After searching about it from all sources whatever I found, I would like to share it with you:

It was developed by Ryan Dahl in back 2009. Node.JS is an open source server environment, uses JavaScript on the server, it’s free and the main advantage is it runs on various platforms (Windows, Linux, Unix, Mac OS X, etc.). Node.js also offers a rich library of various JavaScript modules which are responsible to simplify the development of web applications using Node.js to a great extent.

The following are some of the interesting features that make Node.JS the first choice of software architects:

Now you might have the question, Who uses this Node.JS??? And What it does??

Here is the answer to the first question, Following is an exhaustive list of some application and companies which are using Node.js. This list includes eBay, General Electric, GoDaddy, Microsoft, PayPal, Uber, Wikipins, Yahoo!, and Yammer to name a few.

Answer to the second question, Node.JS does:

Node.js is a proto-server; we have to set up each and everything with Node.js to make it work. It responds to different types of requests, and each request can even initiate other requests to another part of the system. This is called an event loop, and it’s a part of the runtime codes. If you are looking for aNode.js development company, then you will have a lot of choices. Making a web app based on Node.js is only a matter of contacting the right company and finalizing the project. Therefore, there are certain other features which we don’t know about Node.JS, Let’s see here:

JSON IS STILL THE TOPPER

If you are a JavaScript developer then the most important thing for you is you must know about JSON, which is JavaScript Object Notation, it is a popular data exchange format. With JSON people can easily construct API’s, which is the main aim of developing Node.js. Earlier JavaScript has not used alone, and still it’s the same case, we have to use JSON along with JavaScript, they both have made each other’s value to another level. It translates to JSON which is the entire thing currently, and even though we are working on the Node.js framework, we have to respect the use of JSON.

NODE.JS IS ALL ABOUT JAVASCRIPT

We can know that JavaScript is the C-like language for the development of the website. If you are working on developing different applications for your web browser, then it is the most important thing you have to learn. JavaScript helps Node.JS, by handling the event loop mechanism which is the perk of Node.JS. JavaScript is quite popular now, as it helps to run across every OS environment with ease.

IT HAS A WIDE LIBRARY OF CODES

Node.js has a great range of libraries of dependencies which is known as Node Package Manager. This helps us to easily manage things with the dependable package management which let the Node ecosystem to grow well.

Small developers can use better packages which are made for the projects that they decided to make public, with this the developers can have much better functions in their small scale projects. Hence, this will also implement Node.js much easier than other systems.

This Node.JS is a framework divided into different small modules, two of which we can broadly identify as Node.JS application and Node.JS Core. Although we can make use of these two together as it’s not always necessary to be used together at the server or the client end, so it makes it light, with application or core not being included at all places collectively.

Due to such advantages, a good number of companies have taken up the task of providing Node.JS development services.

PLENTY OF INSTRUMENTATION ON OFFER

Nowadays in this competitive world, different tools are available for various production usage; you can easily recreate these scripts with such tools. We even have the tools to make an application run as it would on a client system and server.

As Node.JS is still a developing language, you will have many more tools in the coming days. Node.JS is the best instrumented for production usage.

It is having some great developers who like to keep on sharing their knowledge; you can easily get their help while you are working on Node.JS and sharing on the community is easy. If you have some new package then you can share it with the new developers and even the real developers, so they can save their time in working on other types of sources and packages.

‘BATTERIES ARE NOT INCLUDED’

Node.js Core and Node.js applications are broken into smaller modules that are composed and shared. Each tool and package can be scoped tightly and crafted to be manageable. These can then be baked together mostly without too much unnecessary kneading.

The carefree and low-barrier nature of creating a module also motivates experimentation in the community, and hence there’s experimentation and quite a bit of overlap in the package population. When it is executed well, every package typically handles one task (e.g. node-optimist.js: ‘light-weight [command-line] option parsing’).

During winding up I found, Where does this Node.js not work so well? It’s not totally perfect in places where a single-threaded calculation is going to be the support, like in some kind of classification or successive approximation.

In such instances, it is much more efficient for Node.JS to drop the request to an independent library that is dedicated to the task, where it can be distributed across thousands and thousands of processors.

Node.JS is maturing very quickly and is being deployed in more and more revenue-critical and mission-critical systems, like in eCommerce Black Friday infrastructures.

If you’re building your next generation Web site especially APIs for Web and mobile integration or if you are creating something new that depends on underlying services itself, as discussed above Node.JS is a runtime system so it can work very well for you. Furthermore, it’s simple to get started with Node.JS, and yet it is deep enough to handle the upcoming modern Web complexities with new technologies in the market.