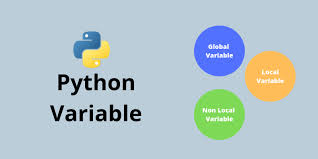 <h1><strong>Variables</strong></h1><p>A variable is like a container that stores values that you can access or change. It is a way of pointing to a memory location used by a program. You can use variables to instruct the computer to save or...

A variable is like a container that stores values that you can access or change. It is a way of pointing to a memory location used by a program. You can use variables to instruct the computer to save or retrieve data to and from this memory location.

Python differs significantly from languages such as Java, C, or C++ when it comes to dealing with variables. Other languages declare and bind a variable to a specific data type. This means that it can only store a unique data type. Hence, if a variable is of integer type, you can only save integers in that variable when running your program.

Python is a lot more flexible when it comes to handling variables. If you need a variable, you’ll just think of a name and declare it by assigning a value. If you need to, you can change the value and data type that the variable stores during program execution.

To get in-depth knowledge on Python, you can enroll for live demo python course

To illustrate these features:

In Python, you declare a variable by giving it a value:

Take note that when you are declaring a variable, you are not stating that the variable myvariable is equal to 10. What the statement actually means is “myvariable is set to 10”.

To increase the value of the variable, you can enter this statement on the command line:

To see how Python responded to your statement, invoke the print command with this statement:

You’ll see this result on the next line:

To use my_variable to store a literal string “yellow”, you’ll simply set the variable to “yellow”:

To see what’s currently store in my_variable, use the print command:

On the next line, you’ll see:

PYTHON Pandas Basic Functions. So far, we have learned the three pandas data structure and how to create them. Due to its importance in real-time data processing, we will focus on dataframe objects right now and mention a few other data structures.