Whether you are developing a bitcoin or cryptocurrency website, Python could be a primary framework for dealing with blockchain. Find out how in this lesson.

Blockchain is the next big thing that is presumed to take the world to a whirl. Why? Because we already see it flourish well through Bitcoins and other cryptocurrencies. Through blockchain, two parties can do transactions between themselves without the need for a mediator. Blockchain uses the method of Public-key cryptography, which encrypts the data so that users can freely share data.

It also means blockchain uses Asymmetric cryptography that uses authentication so that the private key holder gets an authentication message. In encryption, only the holder of the paired private key will be able to decode the messages. However, to make all these systems work, you need a good programming language. And Python is the one that can correctly deal with a Blockchain-based project. But do you know why? Well, here’s why, check it out!

Too Advanced and Easily Learnable

In the current year, Python is constantly developing and earning a humongous amount of acclamation by developers. The language has garnered a considerable amount of stability and reliability because it is backed by a more prominent and proactive developers’ community, who strive day and night to make things work seamlessly. And, all of this has credited Python to achieve great persistence.

As previously mentioned, Python has a huge supporter base, and due to that, it is guaranteed to survive for a more extended period. Thus, you need not worry that your development project will be constructed on something that is entirely obsolete. Even the learning time required to master Python is less. This helps developers to learn it quickly in lesser time and also lets lesser proficient newbie developers contribute to the projects.

Minimalistic and Straightforward by Nature

Minimalization of things is what Python most centers about. Amongst the several features that Python has about simplicity, white spaces are one of them. The white areas refer to the code blocks, and developers don’t have to break a sweat by adding wavy brackets or any keyword. Thus, with Python, developers don’t need to write down colossal code to add to the blockchain.

As once discussed above, Python is tremendously popular these days, and this popularity indeed benefits in executing a blockchain-related project. According to the TIOBE index, Python has secured the third position in the list of programming languages. Therefore, python development agencies are blooming with this success.

This will help you build and end your project smoothly, as the developer's team is truly vast, and several other professionals in this field have already excelled in producing worthwhile projects in the past. The language is heavily popular, which will let your team gather further knowledge about things from the developers.

Efficiently Run in an Uncompiled or Compiled Mode

Developers become more contented with the Python language, as they don’t have to compile every code like that in C++ to make the machine understand.

In many cases, the software, even after being rolled out in public, is smashed with several bugs, so fixing them is not easy for compiled languages like C++. In those cases, you have to manually cease the application, traverse back to the original code, make a fixation of the said bug, perform recompilation of the code, and start the application again.

While in Python, all you have to do is fix the bug and restart the software or application. There is no need to recompile each code. And, this gives a considerable advantage in developing a blockchain project.

The scripting language’s performance might get affected if you translate the code randomly. To remedy such issues, Python came up with techniques like pre-compilation of code that speed up the method.

Blockchain-based projects get further advantage when Python offers the developers a free collection of packages that help them to write codes at ease.

Other Advantages of Python in Blockchain

- A simple blockchain can be created with less than 50 lines with the help of Python.

- This programming is immaculate and clutter-free.

- It has a vast collection of libraries already available.

- With Python, one can put in a single comment and make several functions to work seamlessly

- Be it building blocks with relevant information or joining them, it is much easier with Python.

- The language checkmarks the features that a developer needs like it is versatile and speedy.

- Anyone will be able to add on to the chain without making the transactions process in parallel.

Ways to Build a Blockchain Project in Python

Here are given the ways how you can develop blockchain using Python.

1. The first step is to download and install the Blockchain runtime environment and then use the packages you need for building your custom Python runtime. After that, create a REST API for exposing blockchain and testing it out.

2. Create the first block. You can use JSON format to store data in each particular block. Data blocks will look as given below.

3. Next in the list is coding the blockchain, creating a new class for the blockchain. Try to include the hash of the preceding block within the current block.  The entire chain’s integrity is preserved by putting data within each block. Therefore, this is why including the previous_hash variable in the block class is needed. To initialize the blockchain, you can also include create_genesis_blockmethod.

So, to keep track of each block, you need to include an initial block that comes with an index of 0 and has a previous hash of 0 in the list chain.

4. You can also involve a proof-of-work system, which means that a person has modified previous blocks and needs to redo the league's task and other following blocks. The proof-of-work system needs perusing for a value that starts with zero bits hash, a nonce value.

5. To make all the statements work, you need to build an interface that allows multiple users to interact. It would help if you had a web application framework that works well with Python. In that case, you need to define your web application and develop a local blockchain. So, to make a query in it, you need to utilize the blockchain application in the command prompt by running python3 Blockchain.py. It will bring several different outputs that you need to tweak, change, edit, etc. And finally, you can take advantage of the mining function.

There are also languages like Python that provide certain features similar to Python. But some exclusive features let Python edge away from its competitors in terms of facilitating blockchain services, and that’s what makes Python ace in this technology. Whether you are developing a bitcoin or cryptocurrency website, Python could be a primary framework for blockchain and makes the functionality even better with less effort. 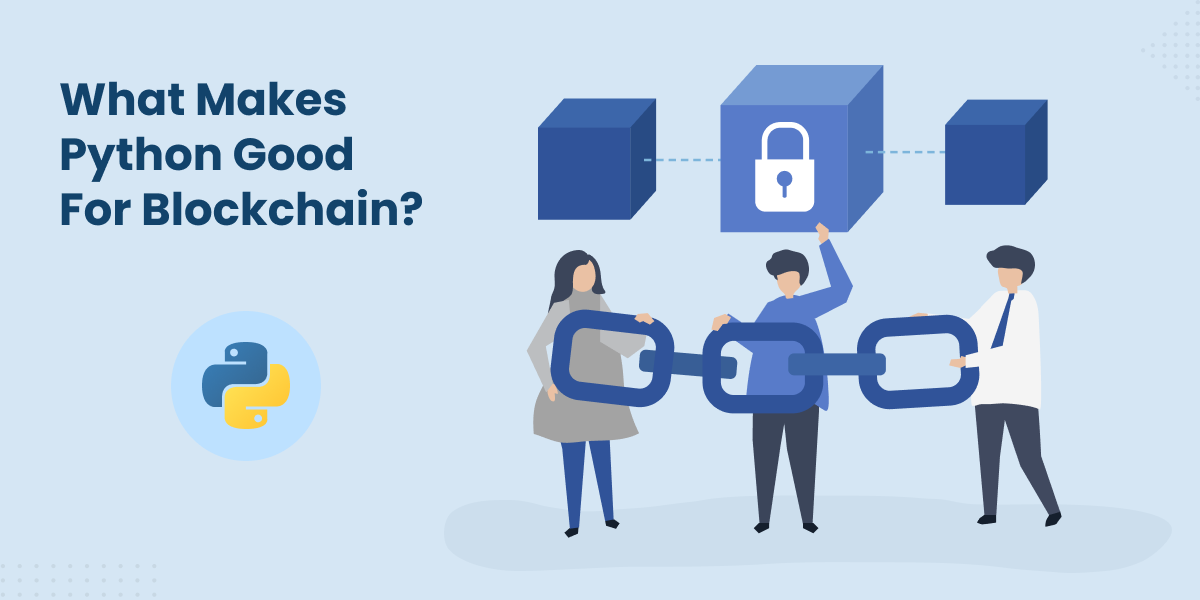