Unit vs E2E Testing for Vue.js 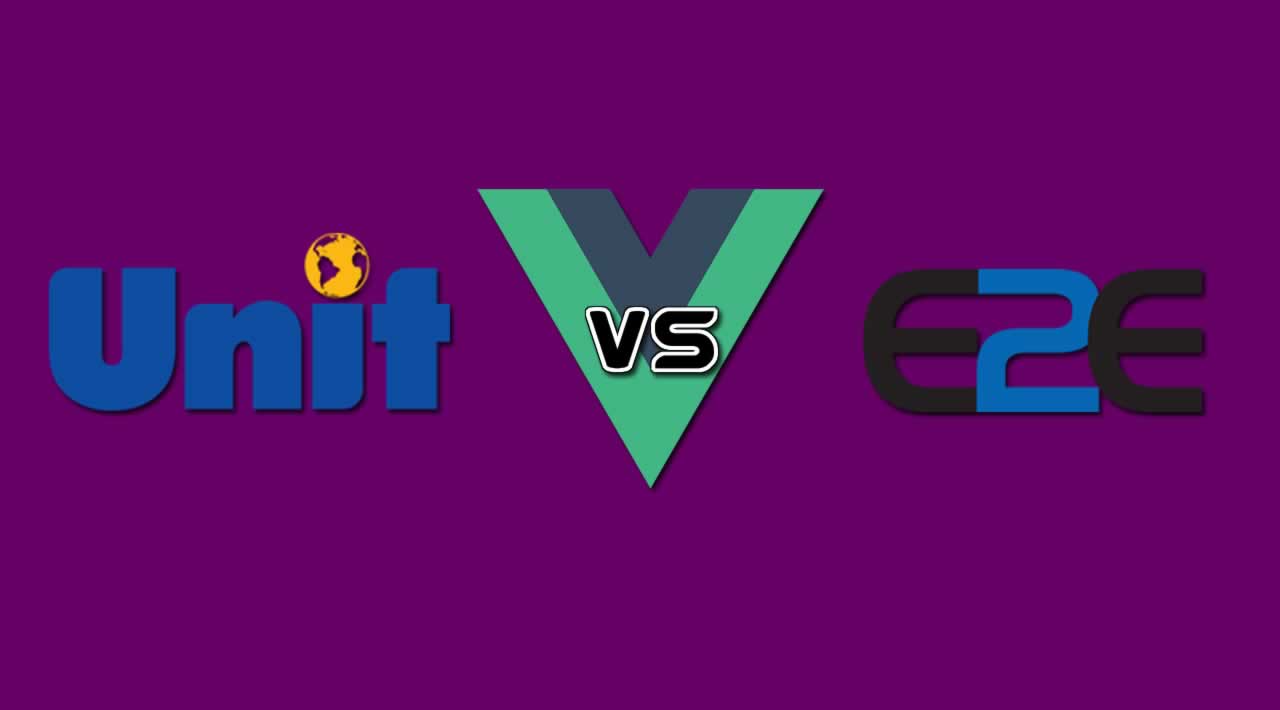 In this article, you'll see Unit vs E2E Testing for Vue.js. What's the difference? Do you need both?

In this article, you'll see Unit vs E2E Testing for Vue.js. What's the difference? Do you need both?

Writing tests when developing Vue.js apps can save you a lot of time which would be otherwise spent fixing bugs. The bigger and more complex your app gets, the truer this becomes.

There are two types of tests that are commonly performed for web applications: unit tests and end-to-end (E2E) tests.

What’s the difference? Do you need both?

The idea of a “unit” in testing, is to break down the code into small, easily testable parts. Usually, the unit is a single function, but can also be a class or even a complex algorithm.

A crucial concept of unit testing is that a given input of the function should always result in the same output.

For example, if we had a function that added two numbers called add we could write a unit test to ensure that a particular pair of numbers we provided as arguments would always return the output we expect.

Any time we run that test and it doesn’t equal 5, we can conclude a bug has entered our code.

In most Vue.js applications functions don’t really represent the atomic makeup of the app. Sure, we can unit test our methods, but what we also really care about is the HTML that’s generated.

For this reason, the unit in a Vue.js app test is a component rather than a function.

How do we test components? Let’s take this one as an example:

Using a library like Vue Test Utils, we can mount a Vue component in memory and create a “wrapper” object. We can then query the wrapper to make assertions about the rendered HTML.

In the above example, we used the wrapper.text() to query for the text in the component output.

In most components, though, testing the veracity of the output will require more than one snippet of text. We often want to ensure that a variety of elements are present.

Maybe it’d be easier to test the entire HTML output of the component?

Another kind of component unit test is a snapshot test where you do exactly that.

How it works is that you generate the output of the component once and write it to a text file. For example:

Now, any time the tests run, if the rendered output of the component differs from what’s in the file, the test will fail.

Snapshots are a blunt instrument, but they are good for testing components which display a lot of HTML.

E2E (end-to-end) testing is a type of functional test. Unlike a unit test, you’re not breaking the application down into smaller parts in order to test it - you’re testing the entire application.

E2E tests interact with your app just like a real user would. For example, you may write an E2E test which:

This test should pass if an authentication token has been stored in the cookies and the app redirected to the profile page.

E2E tests are made on top of a browser automation driver like Selenium that provides an API to drive the browser.

An E2E testing framework like Cypress or Nightwatch will then provide a way for you to script your E2E tests for the browser automation driver.

The following code is what you might use in Nightwatch to perform the test described in the section above. You can probably tell what it does even if you’ve never used Nightwatch.

In my opinion, a combination of both unit and E2E tests is the best approach. The cons of one type can be mostly nullified by the pros of the other.

Using these test types together will give you a lot of confidence in your application, allowing you to add features or refactor without fear of collapse.

The general strategy for combining unit and E2E tests for a Vue.js app is this:

So you’re ready to start testing, what tool can you use?

For frontend unit testing, the best tool right now is Jest. It has many useful features, for example, allowing you to compile TypeScript and modern JS before the tests run.

You can use Jest in conjunction with Vue Test Utils which allows you to mount and query Vue components.

For E2E, the state-of-the-art tool right now is Cypress. Another more basic tool that also works well is Nightwatch.

The good news is that it’s easy to add all of these tools to a Vue application with Vue CLI 3.

Finally, it’s a good idea to use a continuous integration tool like Travis or Circle CI that will run your tests in the cloud (especially good for time-consuming E2E tests) and deploy your code conditional on all your tests passing.

Testing in Vue is really simple! In this post, you'll learn a basic unit test using Mocha and Vue.js

Vue Test Utils is Vue's official unit testing library for Node.js. Here's how you can get started testing Vue components in Node with Vue Test Utils.

A Vue.js testing utility library .This library will be deprecated once vue-test-utils is released.