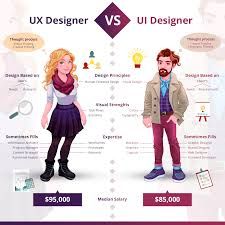 Comparing UI Designers to UI Developers User interface (UI) designers and developers are directly responsible for the consumer base's experience using an application or software program. Designers specifically deal with the visual aspects of the program, while developers deal with the overall performance and functionality of the software. To get in depth knowledge on UI, enrich your skills on UI online training Course

Responsibilities of UI Designers vs. UI Developers UI designers and developers work in tandem to create a program or application that is easy to understand and operate by their customers or clients. Though there may be some occasional overlap in the duties within the workplace, their designated duties are quite clear and are dependent on the other. UI developers are responsible for the coding and programming in the conception of an application, specifically with regard to how the software operates at the hands of the user. UI designers are in charge of applying their understanding of the program operations to create a visual experience that is most compatible to the program's functionality.

UI Designers User interface designers are tasked with understanding the programming language of the application in creation so that they can conceptualize and craft visual aspects that will facilitate usage of the program. They are expected to understand computer programming as well as graphic design due to the demands of their work, since they are in charge of incorporating their designs into the program correctly. Their designs are implemented into the layout, which is typically drafted by the developers, while the style of their designs is contingent on the guidelines given by the directors. Once these designs are finished, they must implement them into the program and run a demo of it for the developers and directors to ensure they met the needs and expectations of the project while ensuring there aren't any bugs caused from their designs. Get more skills from UI Training

UI Developers User interface developers are responsible for the functional aspects of a software application, coding and programming throughout all stages of development with the clients and potential users of the application in mind. They usually begin the process by incorporating the clients' expressed needs into a layout that is modified as progress is made. Once they get the general functions working, the designers will incorporate their visual conceptions into the layout to ensure that the first draft is operational. If there are any bugs or malfunctions to fix, the developers must troubleshoot and patch the application. While doing these tasks, they must take detailed notes of all the progress made to streamline any future updates made to the program, functionally or aesthetically. Learn more from ui design course

**The UX designer** is someone who thinks about what should the user flow be like, which page should lead to which page, when should a confirm popup appear or not appear, should there be a listing page before or after a create-new page, should...

User interface is the front-end application view to which user interacts in order to use the software. The software becomes more popular if its user interface is: * Attractive * Simple to use * Responsive in short time * Clear to understand *...