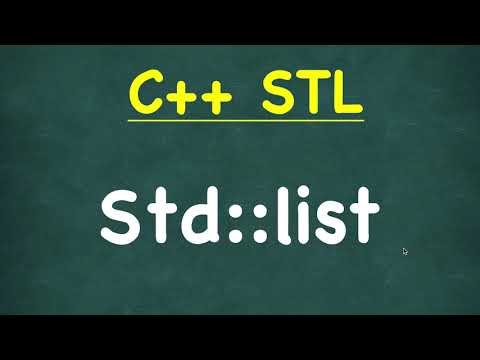 The **Standard Template Library (STL) **is a very useful set of template classes containing various containers. One among these containers is Lists. Today we’ll be having a look at Lists in STL. But before we proceed further I’d like to say that if this is your first time learning STL then I’d recommend you have a look at this article before beginning with this one.

With that being said let’s dive further into the topic by knowing what are lists in STL ?

A. Lists in STL

Lists are a type of sequence containers which provides us with constant insertion and deletion time anywhere within the sequence given that we have obtained the corresponding iterator to the same. It also allows us traversal in both the directions.

The Standard Template Library (STL) in C++ is nothing but a set of template classes which provides us with the widely used data structures such as lists, stacks, maps, etc. along with iterators, functions and algorithms in order to play around with the data elements.

A. Main Components of STL

Containers are nothing but holder objects which stores other objects i.e. it’s elements. A container does the memory management for its elements and provides us with member functions or iterators in order to interact with it’s data elements.

Algorithms, defined under the header , are nothing but a collection of several functions which are designed in order to used on any sequence of elements that can be accessed using iterators or pointers. One thing to note about algorithms is that they do not change the way a data structure is organised in any way. They merely deal with the elements within the structure.

Iterators are something which is used to point at the memory addresses of STL containers’ elements. Thus providing a means to access the data stored within the container. They can be simply thought of as pointers. More about them can be read here.

Now with that being said we are good to go ahead and have a look at our very first container Vector.

B. Vectors in STL

We all know about the commonly used data structure, arrays. A vector can be simply thought of as an array with the added functionality that it’s size can vary over time. Thus we can say that vectors are sequence containers representing arrays that can change it’s size dynamically.

Just like an array, a vector too uses contiguous memory allocation for its elements thus we can make use of offsets in order to access the elements of a vector. Internally vectors make use of dynamically allocated arrays. This array may need to be reallocated in order to grow in size thus resulting in a costly operation of reallocation and copying the elements. Thus vectors do not reallocate each time instead they have an extra amount of space which is greater than their actual size (current size of the vector) and re-allocations usually happen at logarithmic intervals. Thus, vectors occupy more space when compared to an array in exchange of dynamic nature and efficient memory management.

C. Let’s have a look at the syntax

Now, in order to declare a vector we use the following syntax

This declares a vector with 0 elements in it.

In this article I will discuss the numerical algorithms that are found in the Standard Template Library (STL). These algorithms do not replace the math library for the types of functions found in cmath but provide a different set of algorithms for solving certain numerical processing problems. It uses non-contiguous memory allocation, so traversal is slow compared to  vector in C++.

The list allows insertion and deletion operation anywhere within a sequence in constant time.

Elements of the list can be scattered in the different chunks of memory. Container stores the necessary information to allow sequential access to its data.

C++ Lists can shrink or expand as needed from both ends at run time. The storage requirement is fulfilled automatically by the internal allocator.

Zero-sized lists are also valid. In that case list.begin() and list.end() points to the same location. But the behavior of calling front() or back() is undefined.