AI: Right Structure of Agents For your Business

In this post let us talk about the types of agents and challenges of data set for the agents.

All agents have the same skeletal structure. They get percepts as inputs from the sensors and the actions are performed through the actuators. Now the agent can either just act on a percept as a reflex for example if you throw a ball at me and I try to catch it (or duck from it given that I am bad at baseball) than that is a quick reaction to the percept. On the other hand if you throw a ball at me and tell me to arrange it by color or count the number different colors that you are throwing at me then I would have to maintain a state to do the counts correctly. So this would involve some state but is still ok. Now, if you want to trouble me further and you tell me to jump twice if you throw red ball at me and do a burpee if you throw a green ball at me apart from catching and counting then you got me for sure

This would involve a complex logic of me maintaining a mind table of what needs to be done on what percept and this is called** condition-action rule**. Now if all these percepts were to be indexed then this would become a significant data set.

Consider the automated taxi: the visual input from a single camera (eight cameras is typical) comes in at the rate of roughly 70 megabytes per second (30 frames per second, 1080 × 720 pixels with 24 bits of color information). This gives a lookup table with over 10 600,000,000,000 entries for an hour’s driving. Even the lookup table for chess—a tiny, well-behaved fragment of the real world—has (it turns out) at least 10 150 entries.

This can become a lot of information.

The key challenge for AI is to find out how to write programs that, to the extent possible, produce rational behavior from a smallish program rather than from a vast table.

So this brings us to 4 documented types of agent programs 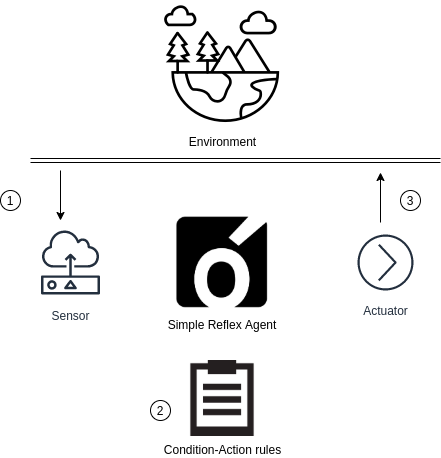