Introduction Loop in Python with Examples

A for loop is used for iterating over a sequence (that is either a list, a tuple, a dictionary, a set, or a string).

With the for loop we can execute a set of statements, once for each item in a list, tuple, set etc.

Here val is a variable that is used for iterating over a . On every iteration it takes the next value from sequenceuntil the end of sequence is reached.

Flowchart of for Loop 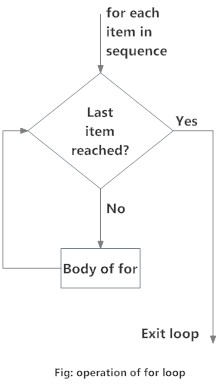 The following example shows the use of for loop to iterate over a list of numbers. In the body of for loop we are calculating the square of each number present in list and displaying the same.

In the above example, we have iterated over a list using for loop. However we can also use a range() function in for loop to iterate over numbers defined by range().

range(start, stop, step_size): The default step_size is 1 which is why when we didn’t specify the step_size, the numbers generated are having difference of 1. However by specifying step_size we can generate numbers having the difference of step_size.
For example:
range(1, 10, 2) is equivalent to [1, 3, 5, 7, 9]

Lets use the range() function in for loop:

Here we are using range() function to calculate and display the sum of first 5 natural numbers.

For loop with else block

A for loop can have an optional else block as well. The else part is executed if the items in the sequence used in for loop exhausts.

break statement can be used to stop a for loop. In such case, the else part is ignored.

Hence, a for loop’s else part runs if no break occurs.

Here is an example to illustrate this.

Note: The else block only executes when the loop is finished.

Nested For loop in Python

Python For Loop (with Examples)

A Python tutorial to understand the uses of for loop in various ways including examples.

Python is a general-purpose programming language, which emphasizes making programming easy, efficient coding, and unleashes the user’s potential. Loops are the vital part of programming as it allows the user to repetitive use a set of codes using loops. So in the following article, we will see how to use for loops in python.

For loop can be categorized in three ways. Python while Loop with Examples

In programming languages, loops are a set of instructions that execute a sequence of code continuously until a certain condition is fulfilled. Most modern programming languages do include the concept of loops. The syntax for loops in each language may differ but the logic being used remains the same.

Many programming languages have several types of loops and the most renowned ones are while and for loop. Today we will only learn about while loop and where it should be preferred over other kinds of loops.

In most cases loops are interchangeable with each other but while loop should be preferred over other loops when the required condition is boolean. We can think of a while loop as a repeating if statement, to make the concept easier to understand.