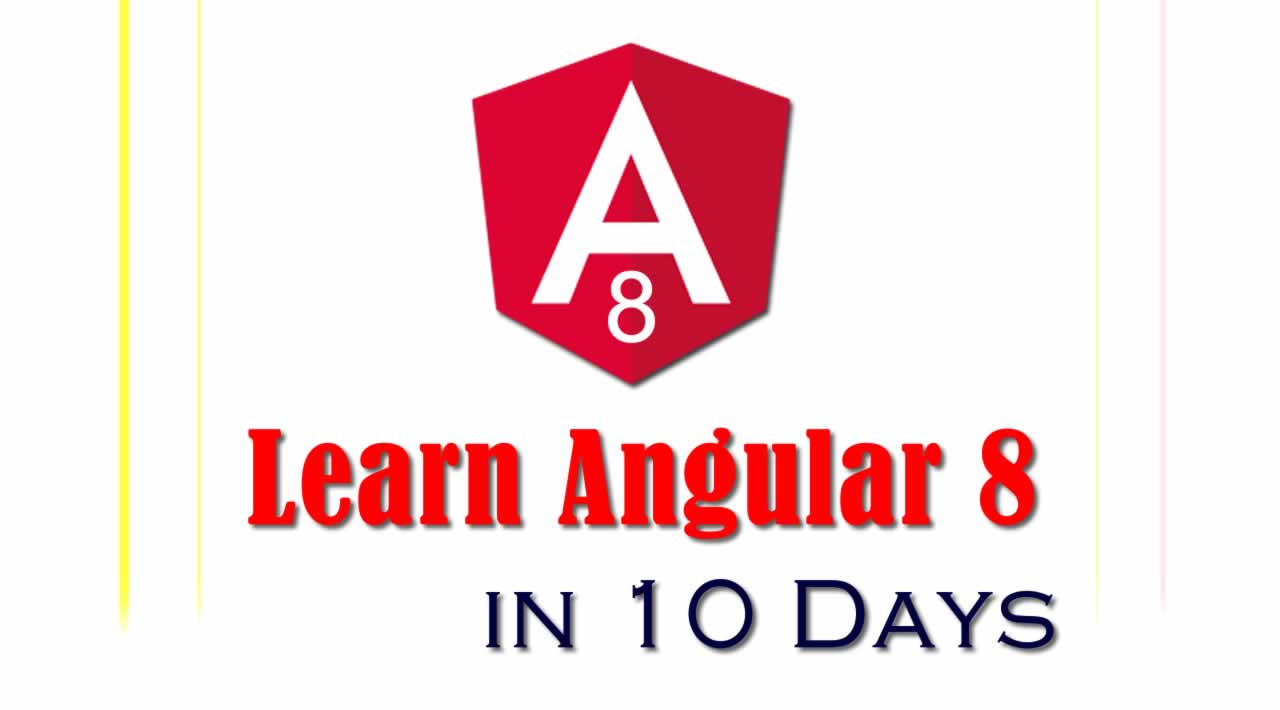 in this article, we will discuss the Concept of Pipes

So, in this article, we will discuss the concept of Pipe in Angular 8. The Pipe is another important element of the Angular framework. Using pipe, we can decorate the data as per our desired format in the application. The main purpose of using pipes is to transform data within an HTML template.

When we want to develop any application, we always start the application with a simple task: retrieve data, transform data, and then display the data in front of the user through the user interface. Retrieval of data from any type of data source totally depends on data service providers like web services, Web API, etc. So, once data arrives, we can push those raw data values directly to our user interface for viewing by the user. But sometimes, this is not exactly what happens. For example, in most use cases, users prefer to see a date in a simple format like 15/02/2017 rather than the raw string format Wed Feb 15 2017 00:00:00 GMT-0700 (Pacific Daylight Time). So, it is clear from the above example that some values require editing before being viewed in the user interface. Also, that same type of transformation might be required by us in many different user interfaces. So, in this scenario, we think about some style type properties that we can create centrally and apply whenever we require it. So, for this purpose, the Angular framework introduced Angular pipes, a definite way to write display – value transformations that we can declare in our HTML.

In Angular 8.0, pipes are typescript classes that implement a single function interface, accept an input value with an optional parameter array, and return a transformed value. To perform the value transformation, we can implement any type of business logic as per our requirement. That pipe can be used in any UI to transform that particular type of data as per the desired result.

Basically, pipes provide a sophisticated and handsome way to perform the tasks within the templates. Pipes make our code clean and structured. In Angular, Pipes accept values from the DOM elements and then return a value according to the business logic implemented within the pipes. So, pipes are one of the great features through which can transform our data into the UI and display. But we need to understand one thing very clearly, that pipes do not automatically update our model value. It basically performs the transformation of data and returns to the component. If we need to update the model data after transformation through pipes, then we need to update our model data manually. Expect these, we can use pipes for any of the below reason –

In any application, Pipe can be needed to use as per the following reason –

In Angular 8, we can categories the pipes in two types i.e. Pure Pipes and Impure Pipes.

Pure Pipes:- Pure pipes in angular are those pipes which always accepts some arguments as input value and return some value as the output according to the input values. Some examples of the pure pipes are – decimal pipes, date pipes, etc. When we use these types of pipes in Angular, we provide input value with related configuration value to the pipes and pipes return us the formatted value as an output.

Impure Pipes:- Impure pipes in angular are those pipes which also accepts the input values, but return the different types of the value set according to the state of the input value. An example of the impure pipes is async pipes. These pipes always store the internal state and return different types of value as the output according to the internal state and logic.

The concept of the filter is mainly used in the Angular 1.x version. From Angular 2 onwards, Google deprecated the Filter concept and introduced the new concept called Pipe. Now, as per the functionality, filter, and pipes, both are working like the same. But still, there are some differences as below –

Most of the pipes provided by Angular 8 will be familiar with us if we already worked in the previous Angular version. Actually, pipes do not provide any new features in Angular 8. In Angular 8, we can use logic in the template. We can define any function within the pipe class to implement any special type data conversion or business login and then execute that particular function from the HTML template to obtain the desired result. The syntax of the Pipe in the HTML template begins with the input value and then followed the pipe symbol (|) and then need to provide the pipe name. The parameters of that pipe can be sent separately by a colon (:). The order of execution of a pipe is right to left. In General, Pipe is working within the HTML only. The most commonly used built-in pipes are:

Now we can define custom pipes in Angular 8 as per our custom business logic. To configure custom pipes, we need to use a pipes object. For this, we need to define a custom pipe with the @Pipe decorator and use it by adding a pipes property to the @View decorator with the pipe class name. We use the transform method to do any logic necessary to convert the value that is being passed in as an input value. We can get a hold of the arguments array as the second parameter and pass in as many as we like from the template. The @Pipe decorator contains the below two properties –

When we define any pipe class using @Pipe decorator, we need to implement the PipeTransforms interface which mainly used to accept the input values (optional values) and return the transform values to the DOM.

So, as per the above example, ViewChild decorator contains the following metadata:-

In this example, we will demonstrate how to use the inbuilt pipes in Angular 8.

Now check the output into the browse – 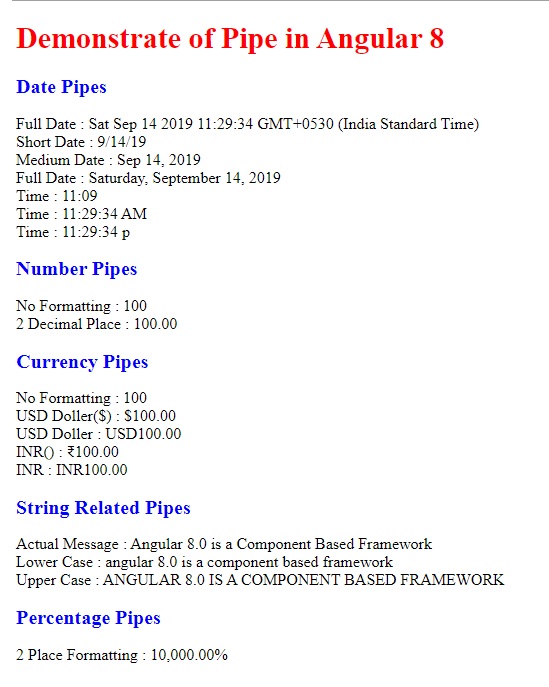 Now, its time to define some custom pipe as per our requirement. Since in the above example, we see that in general Angular 8 framework provides us to UpperCase and LowerCase pipes against any string type value as in-build pipes. But, it does not provide any proper case type pipes. So, let's define a pipe that will transfer any string value as proper case and return the result. For that purpose, add the below typescript class files –

Now, include the proper case pipe in the AppModule as below –

Now run the output into the browser - 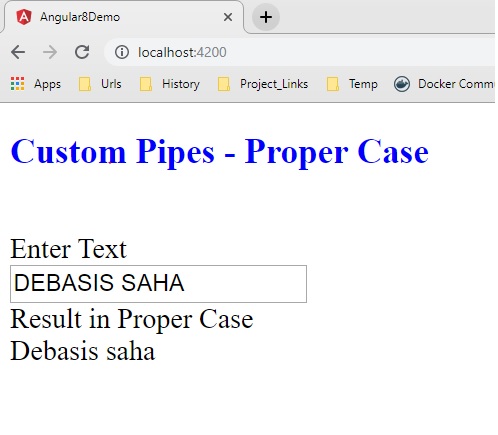 Now, in this demo, we will discuss how to use ViewChild decorator within a component. For that purpose, first, need to create a child component that will be used as a ViewChild in the parent or root component.

Now, include this child component in the app.module.ts file.

Now, use the above child component in the root component as below –

Now, check the output in the browser – 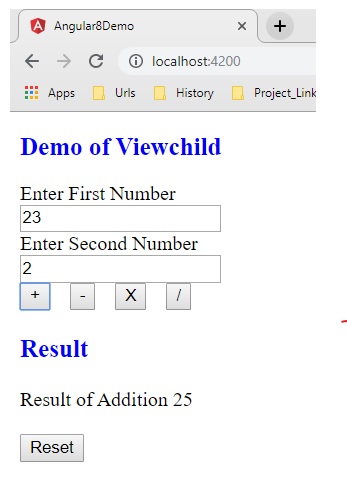 In this article, we discussed another important building block in Angular 8 e.i. Pipes. Also, we discussed the different types of Pipes like Pure Pipe and Impure Pipe. Now, in the next article, we will discuss another concept of Angular 8 i.e. View Encapsulation along with Content Projection. I hope, this article will help you. Any feedback or query related to this article is most welcome.

in this article, we will discuss the Concept of Angular Service

In this article, we discuss how to create an Angular application using Angular CLI along with the basic concept of Angular 8

In this article, we will discuss the Components in Angular 8