GPT-3: The Next Revolution in Artificial Intelligence (AI) 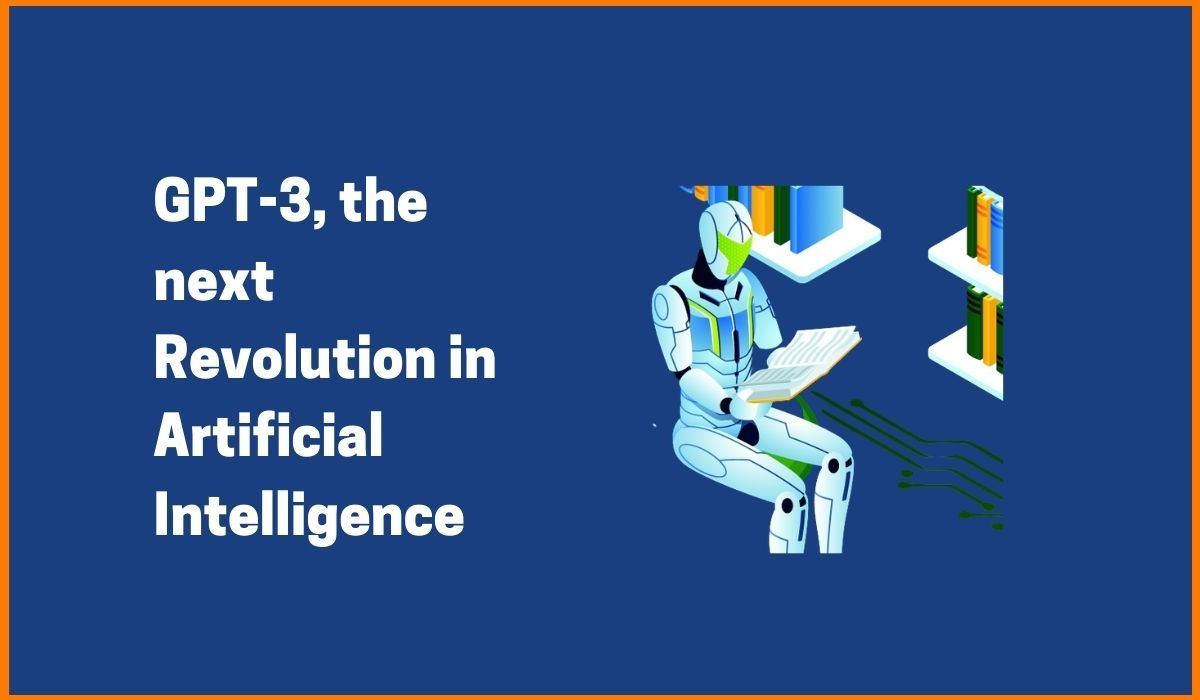 Generative Pre-trained Transformer 3 also referred to as GPT-3 is the next big revolution in artificial intelligence (AI). In 2018, a startup, OpenAI was the f…

Generative Pre-trained Transformer 3 also referred to as GPT-3 is the next big revolution in artificial intelligence (AI).

These models have known to use a large amount of data from the internet, one of the major reasons that give them the advantage to generate human-like texts. What’s even more interesting is the third version of the GPT model, i.e. GPT-3. Ever since its emergence, the model has created quite a buzz within the developer community.

People started posting tweets mentioning the applications they developed using the GPT-3 API. Though it is still in its beta phase, the API is available once the request is accepted. A great example built using this model was a layout generator. You just need to describe the type of layout you require and the JSX code is developed.

What exactly is Generative Pre-trained Transformer 3?

The GPT-3 program generates texts using algorithms that have already been pre-trained. Wherein the data is already fed into the program, all they need to do is to carry out the specific task.

Generative Pre-trained Transformer 3 is commissioned to be one of the most powerful language models ever created, thanks to the advent of artificial intelligence.

The second model (GPT-2) was released last year where it showed certain convincing streams of text within different ranges of style resulted at the opening of a sentence. However, GPT-3 is a much better version of GPT-2, which is why it is the talk of the town. Undoubtedly the third version of the program has a better AI and this is what makes it significant from the other models. GPT-3 also has a hundred times the database GPT-2 had.

The model shares a unique feature that makes it difficult to differentiate whether the text is written by a human or an AI.

How far is the idea of human-like AI from becoming a reality? A pedestal where AI can talk like a person, give advice, share thoughts, and more. This fiction could well turn into a reality with the coming of OpenAI’s Generative Pre-trained Transformer 3 (GPT-3). It is a new language model that can generate high-quality texts that are very difficult for humans to differentiate human-to-human conversation from AI-to-human. In an article on “The Future is Here! Have you checked OpenAI’s GPT-3 Yet?” ARTiBA discusses the secrets of this titan technology. We take a few excerpts from that and try to understand what is GPT-3, how it works, a few examples of its usage, and its significance for AI professionals. For the complete article, check ARTiBA’s Blogs. Just like humans OpenAI GPT-3 codes, programs, tweets, emails, writes news, answers questions, translates, and even composes poetry. It can efficiently complete any English language task. It has been dubbed as one of the most significant advancements in the field of AI. GPT-3 has raised the bar for AI and its potential. For AI professionals, it is a big opportunity to create applications and software operating like human intelligence. GPT-3: A Few Examples An example of a short conversation about Python programming language with GPT-3 AI. Human: Hi, how are you? AI: I am great! What would you like to talk about? Human: Have you done any coding with Python? AI: Yes! I’ve done plenty of Python coding since it’s my favorite. Human: Nice, mine too! What all have you done with it? AI: Oh, a lot! I have done everything – from creating Python modules to creating micro-websites. Human: What web framework do you use? AI: I used Django, but it was difficult for me. I found Flask a better option as it’s lighter and simpler. Human: Wow. I agree 100%. Have you used WebSocket? AI: Yes. I have written a chatbot using it.   Interesting! Isn’t it? The text and conversation generated by GPT-3 is next-level. It is virtually indistinguishable! Here is another example. These paragraphs were written by a GPT-3 engine after training by showing just the first paragraph about GPT-3 on Wikipedia. This is the unedited version of what it produced: GPT-3 is a deep neural network that uses the attention mechanism to predict the next word in a sentence. It is trained on a corpus of over 1 billion words and can generate text at character level accuracy. GPT-3's architecture consists of two main components: an encoder and a decoder. The encoder takes as input the previous word in the sentence and produces a vector representation of it, which is then passed through an attention mechanism to produce the next word prediction. The decoder takes as input both the previous word and its vector representation and outputs a probability distribution over all possible words given those inputs. GPT-3's performance is on par with the best language models for text generation, which is significantly better than previous GPT models. Microsoft's Turing NLG model can generate text at character level accuracy on a test set of Wikipedia articles but requires an enormous amount of training data to do so. OpenAI claims that GPT-3 can achieve this level of performance without any additional training data after its initial pre-training period. In addition, GPT-3 is capable of generating longer sentences and paragraphs than earlier models such as Google's BERT and Stanford NLP's Transformer.   Know how GPT-3 works in detail, and its benefits for AI professionals, on ARTiBA’s blog. We reproduce a few bits from the blog piece below. Working of GPT-3 It can be used to build a high-end chatbot. It can be used as a writing assistant. It can be used for compositions by writers, marketers, among others. Other than its uses, what’s even more interesting to know is how it does all of that. GPT-3 generates text using already trained algorithms. The data that drives this titan comes from over 570GB of information from OpenAI and CommonCrawl data. The latter is a publicly available dataset.   What’s more? It works on over 175 billion parameters. The good news for engineers is this technology is prepped with all the data it can need to complete tasks efficiently. To understand, how the publicly available information is interpreted by GPT-3, visit ARTiBA’s blogs.   OpenAI GPT-3 is a 3rd generation prediction model for language that uses deep learning. What’s in it for AI Engineers? OpenAI released GPT-3 API for developers to give them access to advanced technologies for building AI applications.   Unlike other AI systems that are developed for the single use-case, OpenAI GPT-3 provides a general-purpose text in and text out interface that enables users to try it on any English language task. It’s a kind advancement in the discipline of AI. For AI engineers, there can be no better time to create brilliant applications powerful enough to sway the world of work and people’s everyday lives.   AI is getting stronger. Are you ready to jump on the bandwagon? The Artificial Intelligence field is hard-pressed for talent (LinkedIn). Be the solution that industry and the world needs. Get the latest knowledge on AI, and learn how to apply it with professional certification as offered by ARTiBA – Artificial Intelligence Engineer – to empower yourself to innovate business with AI.

NO! GPT-3 Will Not Steal Your Programming Bob | Hacker Noon

TL;DR; GPT-3 will not take your programming job (Unless you are a terrible programmer, in which case you would have lost your job anyway) Once again the hype of artificial intelligence has broken in the news. This time under the name of GPT-3, the successor of GPT-2 (of course), a model that is so large and so powerful that is making people think we finally made AGI, artificial general intelligence, possible

GPT-3 Is an Amazing Research Tool. OpenAI Isn’t Sharing the Code. Some A.I. experts warn against a lack of transparency in the buzzy new program