Learn JavaScript by Building a Capitalize Function for Strings

When working to learn the JavaScript programming language, it helps to work with various coding exercises this one. In this guide, we’re gonna walk through, how we can create a two-capital function. What I’m essentially wanting to do, is if I have string … I’ll create a variable here. Let’s just call this, short string. If it says, hi there, you can see we have the H capitalized, but the T isn’t. What I wanna do is build out a function that will go through, and it’ll capitalize every word that we have here. If I had one called, long string and this said, the quick brown fox jumped over the lazy dog, just like this, then when we run the function through it, it would go, and it would go capitalize each one of the first words.

Now, there are a number of ways to do this. You could loop over each one of the elements. You could create some kind of starter string. You could say something like this, or it’s just creating the string. You start with it just being an empty string. You go through, and you loop through each one of the words. You pipe it into the strong. That would be a valid way of doing it. I wanna show you a way that I personally think is a little bit cleaner, it’s more of a functional approach. Hopefully, you’ll enjoy going through this one.

I’m gonna start by creating a function called, toCapital. This is going to take a string as an argument and it’s going to be an arrow function. Inside of here, the very first thing that I wanna do, is I want to break up this string, into a set of words. The way we can do that, is with the split function. I can say const words = string.split. I wanna split it at each space. The way you can do that is by saying split, and then the argument to split is where you want it split at. If we wanted … Say, this was a CVS file and you wanted it split at each comma, you’d say split, with a comma inside of it, and then it’d break each one of those into it’s own element. For right now, I want to split it, so that each word is gonna be converted.

Now, let’s see what this looks like. If I can toCapital, and then I pass it … Let’s pass it the long string. You can see that we’re getting undefined, cause I need to return this. Here I’ll say, return words. There you go. You can see that we’re getting an array of the words. They’re all split up the way that we’ve want. That’s the first step. Really, we only have one more line of code, in order to get this working. Instead of returning words, what I wanna do is, return words. I wanna map over it. I want to iterate over the collection of words we just created, and run a process here. Word takes a function. I’m gonna make it an arrow function.

I’m gonna say, Map and then each time we iterate over, map is going to loop through the words. It’s going to give me access to the words, one at a time. From here, what I wanna do is, I want to change how word is processed. I wanna grab the first element of the word. Now, because of the word, being a string, what I can do is, grab it, just like this. Let me show you what this looks like. Well, you can see exactly what’s getting returned. It’s breaking up each one of those items. Let me show you how this can work down here. If I say short string, and then I grab the very first element from that, you can see it’s saying, H. The way that you can parse through strings in JavaScript is very similar to how you would parse through an array.

When I say shortStr[0], this is grabbing me, the very first element. That is exactly what I’m wanting. I’m gonna say, word[0], and then I want to cast this, or change it to upper case. What that’s gonna do is, that is going to grab the first element and then it is going to convert it, no matter what it is. If it already is upper case, it’s going to keep it that way. If it is lower case, it’s gonna make it upper case. From there, I simply want to add on to the rest of the words.

For this very first example … For the quick brown fox … For this one, it’s going to loop over the word. It’s going to give me the. It’s going to take the T, it’s going to make that upper case. What we need is we need to get access to the H and the E, and then combine them. The way we can do that is with the slice method. I can say, word.slice and pass in a one. Now, if you have never seen this before, let’s take a look at what this is going to do. If I say, let’s just grab some word … Let’s just call it word actually. Just make it nice and easy… 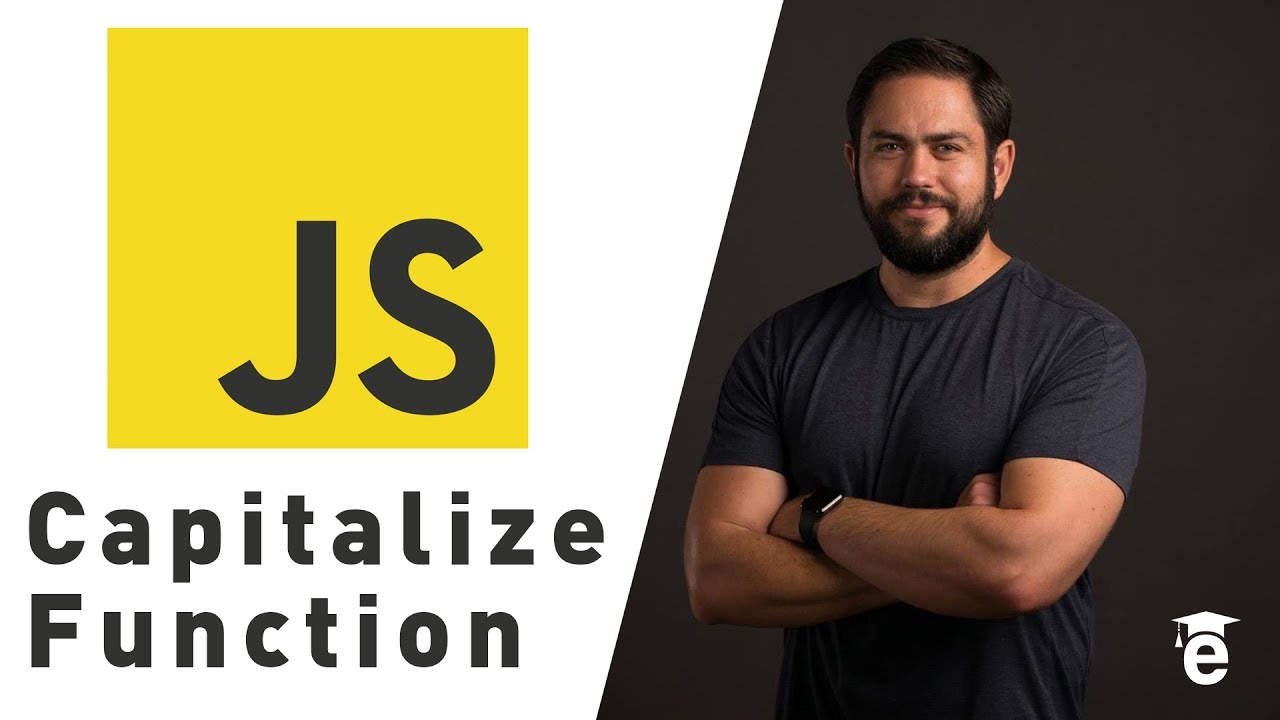 Strings are the second most common data type used in JavaScript, and in many cases, since JavaScript is so widely used for web applications, it is the prominent data type. In this article I’ll discuss how strings work in JavaScript and how to work with them efficiently and effectively. I’ll also discuss some newer abilities of strings that are just being discovered and used.

A string is any set of 0 or more characters enclosed in either single quotes or double quotes. The characters in a string can be alphabetic characters, numbers, symbols, and spaces. Here are some examples of JavaScript string literals:

If you are using single quotes in your string, and you need to embed a single quote to write out a contraction, you use the backslash character (\) as an escape character. To see why you need to do this, let’s look at what happens when you don’t escape a single quote by writing out such a string in the JavaScript shell:

The interpreter can’t figure out what to do with the ‘t’ after the single quote.

Now watch what happens when we escape the single quote:

The escape character tells the interpreter to treat the single quote as an apostrophe and not as an “end-of-string” character.

You can embed other characters into a string, including the newline character (\n) and the tab character (\t). Here are some examples using the shell:

📺 The video in this post was made by Programming with Mosh
The origin of the article: https://www.youtube.com/watch?v=09BwruU4kiY&list=PLTjRvDozrdlxEIuOBZkMAK5uiqp8rHUax&index=6
🔥 If you’re a beginner. I believe the article below will be useful to you ☞ What You Should Know Before Investing in Cryptocurrency - For Beginner
⭐ ⭐ ⭐The project is of interest to the community. Join to Get free ‘GEEK coin’ (GEEKCASH coin)!
☞ **-----CLICK HERE-----**⭐ ⭐ ⭐
Thanks for visiting and watching! Please don’t forget to leave a like, comment and share!

JavaScript programs are made up of statements. A statement can be anything from a single function call or command to even just a variable name. JavaScript evaluates statements and then executes them.

For example, when you create a variable, you write a statement:

JavaScript recognizes this as a statement and evaluates it by following its grammar rules. In this case the rule is to assign the expression on the right-hand sign of the assignment operator to the variable on the left-hand side.

As I mentioned above, a statement can be just an expression, as in the following example:

You can do the same thing with a variable:

Statements can be much more complicated than these examples, though, as you’ll learn as you get deeper into JavaScript. So far, you have seen examples of two types of statements — variable declaration and assignment statements and print statements.

These operators are binary operators, meaning there must be values on either side of the operator. The + operator and the -operator can also be used as unary operators, in which can they are used to distinguish the sign (positive or negative) of a number.

For example, take the expression: