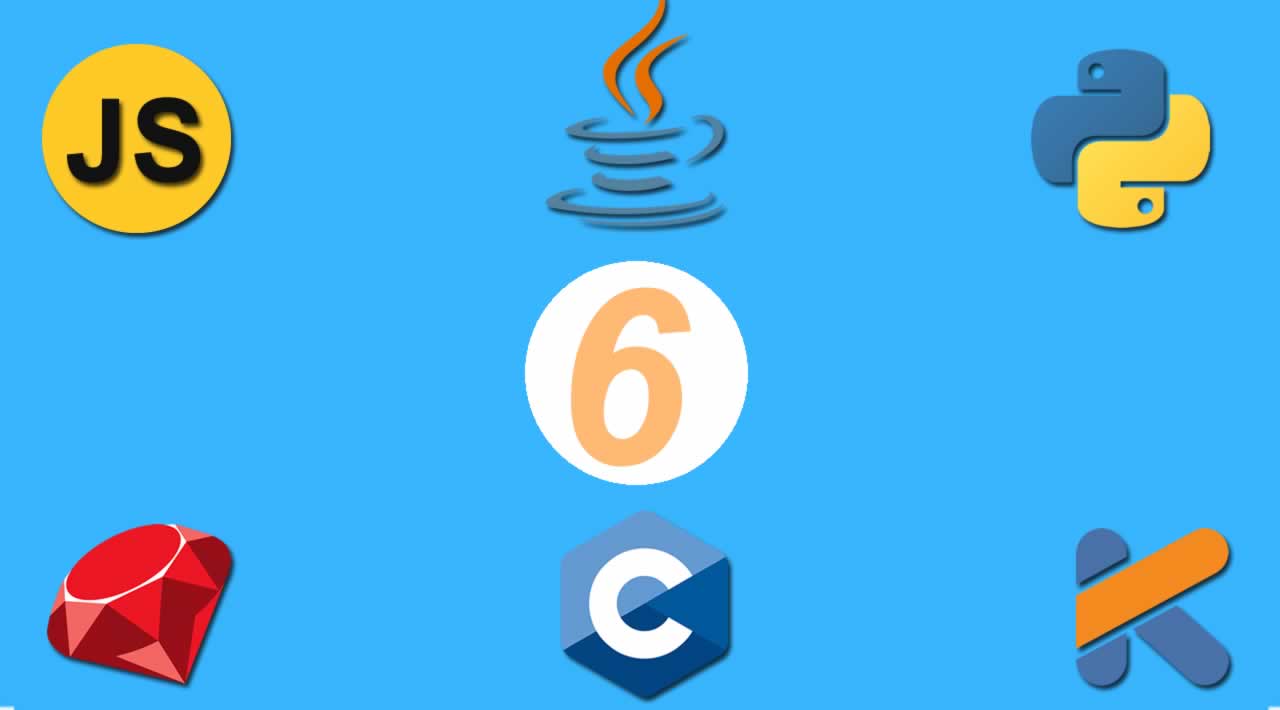 6 most popular programming languages - If you’re a software developer, then you probably—every now and then—feel overwhelmed by the super-fast pace at which our industry evolves, and that’s fine.I certainly feel that way sometimes, especially when trying to keep up with the latest trends.

But it’s possible to be well-informed about what’s going on out there, and use that information to your advantage, by being economical about your learning.

Sure, there are lots of programming languages. Sure, new ones keep being created every week—and don’t even get me started on JavaScript frameworks.

Do you need to learn all of them? Of course not.

First, learn about a number of the most popular programming languages. Then, narrow that list down, by picking the ones that make the most sense for your current knowledge level, employment status and other criteria that might make sense for your scenario.

For instance, if you intend to learn the functional paradigm, then pick a functional language from the list. Rinse and repeat.

That’s what this post is about. We’ve done the legwork for you, compiling a list of five of the most popular programming languages for 2019. Now you only have to read it and put it to good use.

A Look At Our Sources

You might be wondering where have we found our data for this post. There are hundreds of metrics to look at when considering the top programming languages, but we focused on a few of the most authoritative, namely Tiobe and GitHub.

For decades, Tiobe (the software quality company) has generated an index of the most popular programming languages. They update this list monthly, pulling in data from hundreds of sources around the world.

For more on how the Tiobe Index is calculated, see here.

GitHub is one of the largest code repositories in use today. Every year they create a Year in Review report, sharing statistics about their programmer community. We use this data as another indicator of language popularity.

In this post, we also attempt to predict the future of programming languages.

We use a wide variety of resources to predict the fastest growing languages and the most influential languages. Of course, all of these insights are up for debate, but they are worth considering if you want to stay ahead of the curve.

Let’s get into it. Below are the most popular programming languages of 2019, and predictions about the future of code. 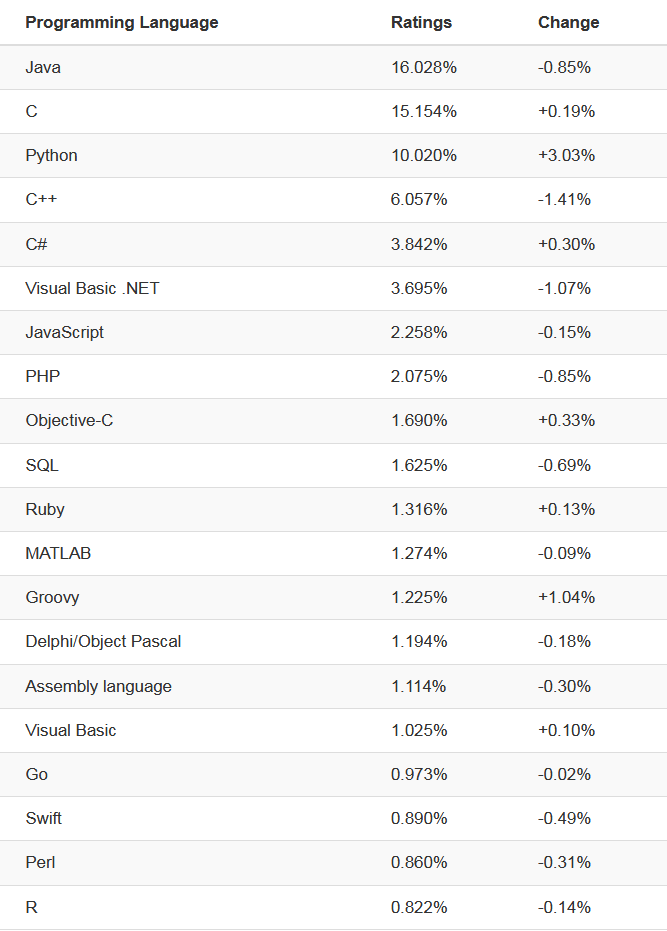 The table above shows the top 20 most popular programming languages as of August 2019. The Tiobe Index works like market share; the percentage is the amount of “market share” a language holds. All of the languages combined total 100 percent.

Tiobe factors in variables like the number of professional developers worldwide, training courses, and third-party vendors.

Most of this information comes from analyzing search engine results. Here is an explanation of how the Tiobe Index is produced.

Last, but not least, we take data from The GitHub Year in Review—which is a report published annually by GitHub.

Using the data from GitHub we can see not only the most used languages on the platform during the year, but also the ones which are growing the fastest. 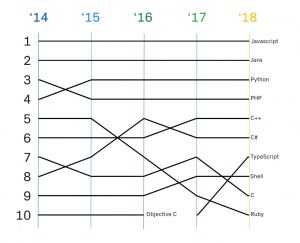 The chart above shows GitHub’s top languages over time.

What makes the top programming languages so popular? We’ll take a deeper look at five of the top languages to learn how they’re used and why people love them.

According to Tiobe, Java has been the number 1 or 2 most popular language basically since its creation in the mid-90s. Many of the world’s biggest companies use Java to build desktop apps and backend web systems.

If you know Java, chances are you won’t be desperate for work!

There are a number of factors that make Java so popular:

If you’re a Java developer, check out the Stackify Retrace and Prefix tools so you know exactly what’s going on with your code.

C is one of the oldest, most popular programming languages, thanks to its near universal portability and early adoption by Tech’s biggest brands, including Microsoft, Apple, Linux, and Oracle.

C is also the most popular language for embedded systems in cars, electronics, and other devices.

Nearly everything that we touch today, from our cell phones to alarm clocks, is influenced by—if not directly written in—the C language.

Why is it still a popular programming language to learn today? First, it’s essentially a portable assembly language. It works with nearly every system and operates about as low to the machine as you can get.

C also has features that make is perfectly qualified for operating systems and embedded systems (like your car’s dashboard). Thanks to its relatively small runtime, C is perfect for keeping these systems lean.

Any programmer will benefit from learning the C language.

Many algorithms written and shared online are done in C. It’s essentially the “universal language” of programming languages. C spinoffs like C++ and C# are also among the top 5 most popular languages, again emphasizing the influence C still has today. 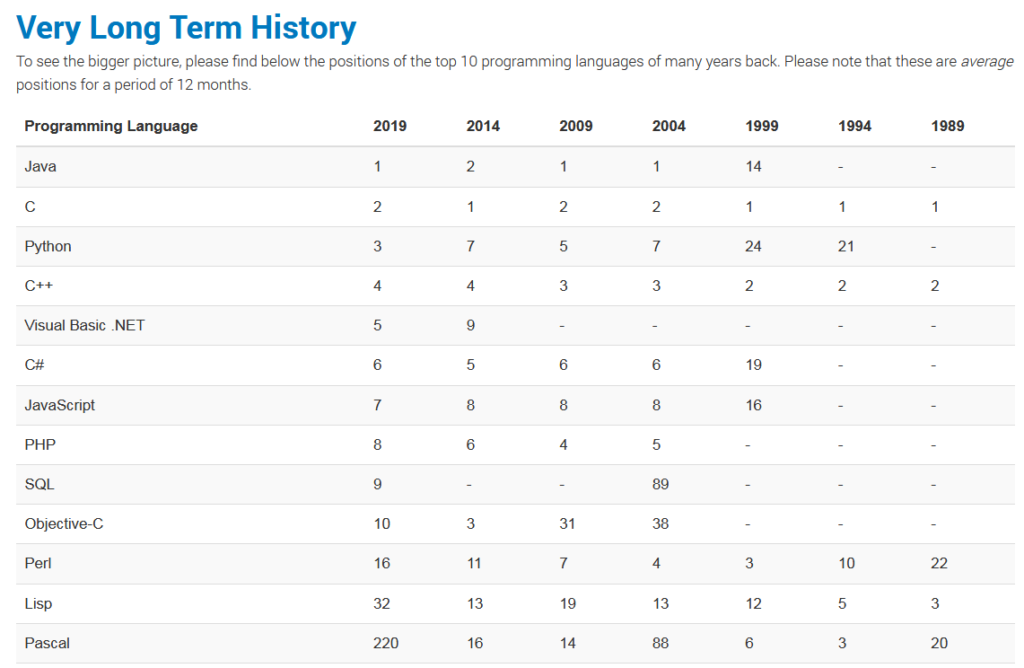 The popularity of Python has risen steadily over the past 15 years, finally breaking the top 5 on the Tiobe Index a few years ago. This is because Python is a major language in some of the most exciting technologies today.

Machine learning, artificial intelligence (AI), Big Data, and Robotics all rely heavily on Python (Robotics also relies on C for its use in systems programming). Cyber Security, one of the top software challenges of our time, is also driven by Python.

It’s surprising how simple Python is to learn.

It’s now the most popular introductory language taught in universities and often picked up by experienced developers as a second or third language.

Thanks to the ubiquity of web browsers, JavaScript has become one of the most popular programming languages in the world, and number 1 on GitHub in terms of pull requests.

There are notable complaints with JavaScript (more on that in a bit), but JavaScript has held its own against newer languages and will continue to play a significant role on the web.

JavaScript allows developers to add interactive effects to web pages. It often works alongside HTML, but it’s becoming more common for web apps to be built entirely in JavaScript.

Because of its simplicity and speed, more startups and tech businesses are starting to use JavaScript on the backend via the Node.js framework.

Ruby is one of the most popular languages among tech startups.

Many Silicon Valley unicorns have been built on Ruby, including Airbnb, Twitch, GitHub, and Twitter. Its popularity is bolstered (and perhaps dependent) on Ruby on Rails, a full-stack web application framework that runs Ruby.

Ruby is beloved by developers for a number of reasons.

This explains why startups are so fond of the language: it enables the famous startup mantra, “move fast and break things.”

The downside of Ruby is its scalability.

Ruby is a dynamically-typed language, which makes it very flexible and great for prototypes, but difficult to maintain at scale. As a Ruby app grows, the dynamic nature of the language obscures the source of code errors and eats up computing resources. This is why Twitter switched from Ruby to Java.

The couple last years have been great for Kotlin, the statically-typed programming language from JetBrains.

On top of receiving loads of good press, in 2017 Kotlin was also named an official development language for the Android platform.

And, as you can see in the image above, GitHub’s report indicates that Kotlin was the fastest growing language in 2018.

There are several reasons for Kotlin’s rise in popularity, not least of which is its 100-percent interoperability with Java and the fact that IT runs on Java Virtual Machine (Java is another official Android language).

Kotlin also compiles down into JavaScript, making it extremely versatile for both front and back-end development.

Expect to hear a lot more about Kotlin in the years to come, and if possible, take some time to add it to your repertoire (it’s surprisingly simple).