In this article, we take a closer look at and compare the best alternatives for a Web3 backend platform. Specifically, we look at Moralis many features.

Ever since the birth of the first programmable blockchain (Ethereum), the demand for Web3 backend and frontend developers has been soaring. In turn, numerous programmers want to seize the opportunity and future-proof their career by becoming Web3 developers. However, many aspiring blockchain developers find the backend of Web3 to be daunting. Thus, wouldn’t it be hugely beneficial if there was a Web3 platform that could simplify backend programming? If there was, you would be able to direct all of your efforts, time, and resources on creating a phenomenal frontend. In addition, you could avoid building your dApp’s backend from scratch. Fortunately, this is literally what the best Web3 backend platform provides.

Not long ago, the only way to build on Ethereum was to run your own RPC nodes. Moreover, you had to build everything from the ground up. Even such basic features like Web3 authentication could have taken weeks to be developed. Not only was that highly time-consuming, but it also forced devs to deal with all of the limitations of RPC nodes. Now, fast forward to 2022, and you have a rather impressive Web3 tech stack at your disposal. For starters, there are quite many reputable programmable chains to choose from. Plus, many reputable API and node providers also make things easier. However, these are not the leading Web3 backend solutions. The real Web3 backend shortcut comes in the form of the best Web3 backend platform – Moralis.

What is a Backend?

The backend, also known as the server-side, refers to all functionalities that run without clients (users) seeing them. While the frontend is all that interests users, it is the backend that typically does all the heavy lifting.

You may have heard of backend technology stacks such as LAMP and MEAN. The former includes Linux, Apache MySQL, PHP, while the latter includes MongoDB, Express, Angular, NodeJS. Moreover, a vital part of any backend is a database.

Databases are used for storing and structuring information and serve as persistent storage. Via CRUD functionalities, databases enable adding, reading, updating, and deleting data. In addition, note that there are various types of databases. More importantly, for today’s discussion, keep in mind that blockchains are also a specific type of database. They are public, immutable, and append-only databases.

So, to sum it up: the backend is a part of an application (or other operation) to which users don’t have access that enables the application to operate. 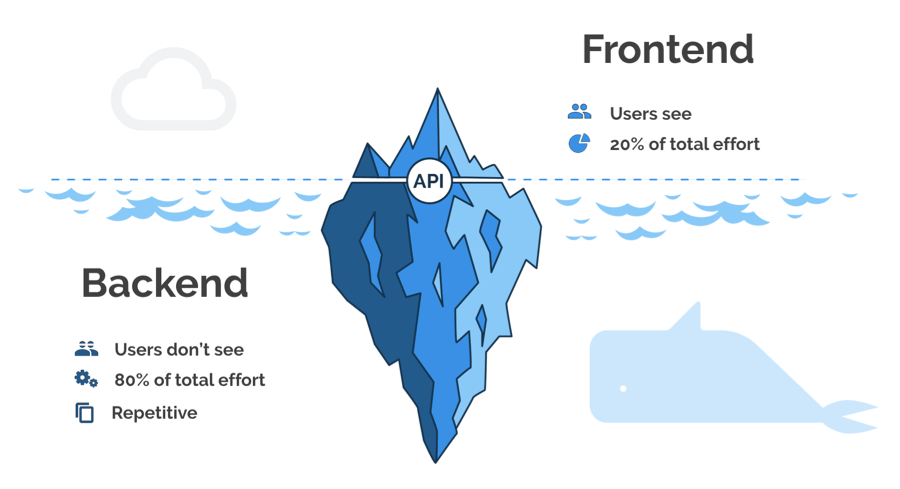 Why do You Need a Web3 Backend?

Now that we all know what a backend is and that blockchain is essentially a particular type of database, you probably already realize why you need a Web3 backend, right? Well, just to make sure we’re all on the same page, let’s elaborate on that. If blockchains are databases and if databases are a vital part of a backend, then by definition, we can’t interact with blockchains without a Web3 backend. This means that even the simplest dApp or Web3 application needs a proper backend. Furthermore, the better backend you have, the smoother your dApp will run. Plus, a dApp with a quality backend will also offer more functionality. Hence, it will not limit the frontend. However, make sure to keep in mind that not all backends are equally good. 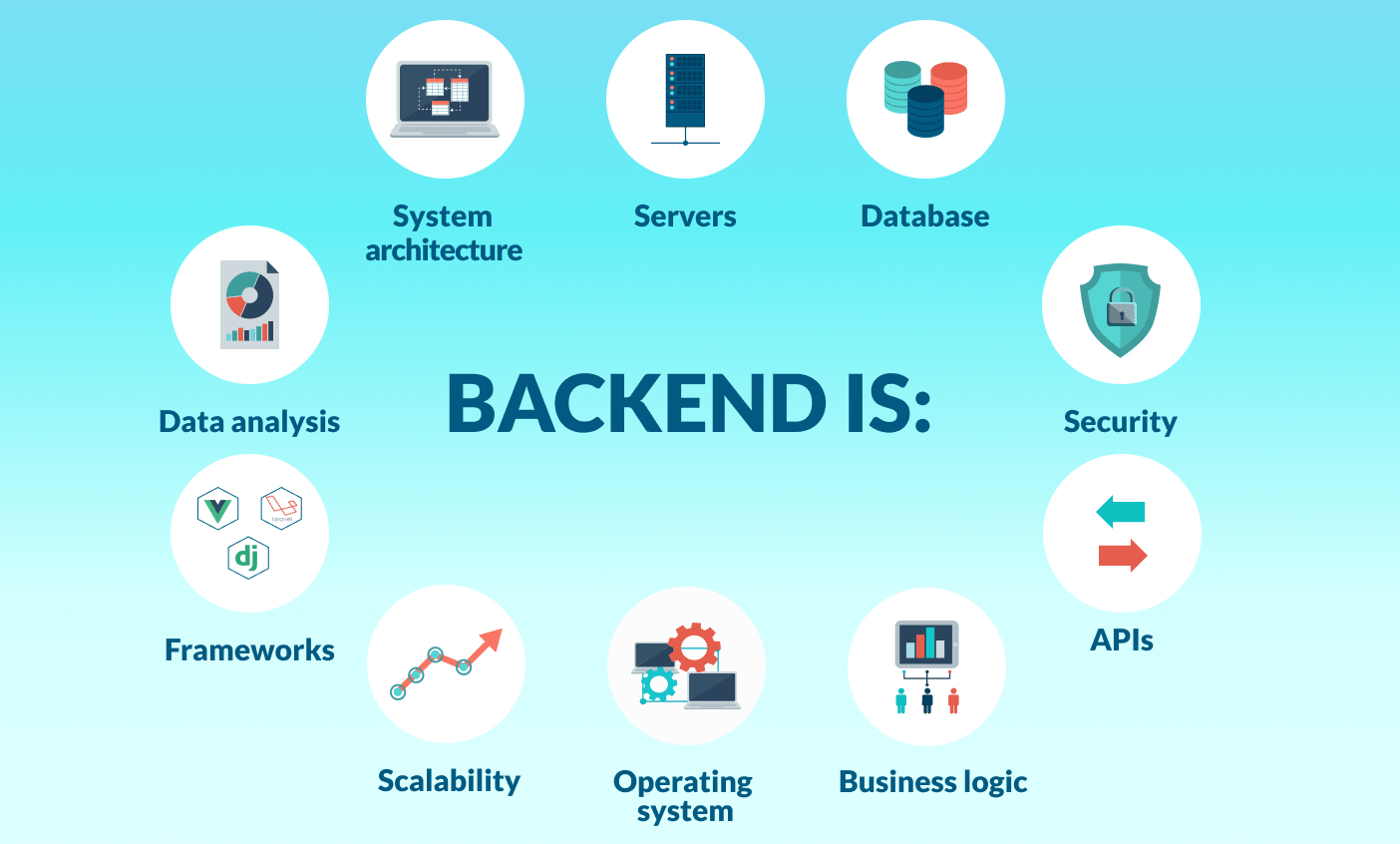 For instance, communicating directly with the blockchain or even with an RPC node is quite limiting. Both of these layers are rather primitive. It is the equivalent of communicating with the CPU when building a website. Can you imagine that? This is where APIs come into the picture. Moreover, there are actually quite many reliable and reputable Web3 API providers available (see the list below).

Some of our top Web3 backend API picks:

However, looking at the legacy system, we can see that platforms are the go-to tool to create applications with maximum ease. Firebase, Azure, and Amazon Web Service (AWS) have been priceless tools for Web2 development. Hence, we can expect the same pattern in Web3 development. Now, while some node and API providers try to position themselves as Web3 development platforms, they lack the range of functionality to actually be called platforms. However, with a team of devoted and caring developers, Moralis managed to become exactly that – the ultimate Web3 backend platform.

At this point, you know that platforms are the ultimate shortcuts to creating applications. How? Well, they cover most of the heavy backend-related lifting for you. However, some are better than others. For instance, there is one platform available that lets you simply copy and paste short snippets of code to include even the most advanced backend features. This is exactly what Moralis offers, and it is also how Moralis has helped developers reduce the average dApp development time by over 80 percent. Hence, its nickname “Firebase for crypto” and being recognized as the premier choice and known as the best platform for Web3 backend programming.

Moving forward, we will go through the main functionalities of the best Web3 backend platform and show you how easily you can get started. As with the legacy platform, your first step is to create a free Moralis account. By doing so, you gain access to all the tools needed to build decentralized apps quickly and easily. Aside from constant improvements, including adding support for new programmable chains, Moralis also listens to its users. As such, it now utilizes Ethers.js (Web3.js vs Ethers.js) based on a request from the community. In addition, Moralis Nitro has also been released this month. The latter adds many advanced features and significantly increases speed.

Using JavaScript libraries and the Ethereum API offers you a lot of options. However, these come with certain limitations. Fortunately, Moralis enables you to bridge those limitations easily. For one, cross-chain interoperability is where Moralis offers an unparalleled advantage. Since Moralis’ SDK supports several programmable blockchains, you get to future-proof your work. By creating a Moralis server for multiple chains, you get to deploy your dApps across all supported blockchains. Furthermore, Moralis enables you to efficiently work with the on-chain data.

When you want to create next-generation applications, you need to have a proper Web3 backend at your disposal. To create that infrastructure yourself, it would take you weeks or months. Also, you would need an entire team of backend devs to maintain it. Hence, this is evidently not the most optimal way, especially if you are not even sure if the users will like your frontend. Thus, it makes sense to use existing infrastructure. Moreover, since there are still many limitations with node and API providers (both provide you with raw data), using the best Web3 backend platform is the optimal solution. It enables you to avoid reinventing the wheel and focus on what really matters – user experience.

Moralis makes things extremely simple and practical. It enables you to do all of the following and more after logging in to your account:

Here’s the list of key features that best describe Moralis: 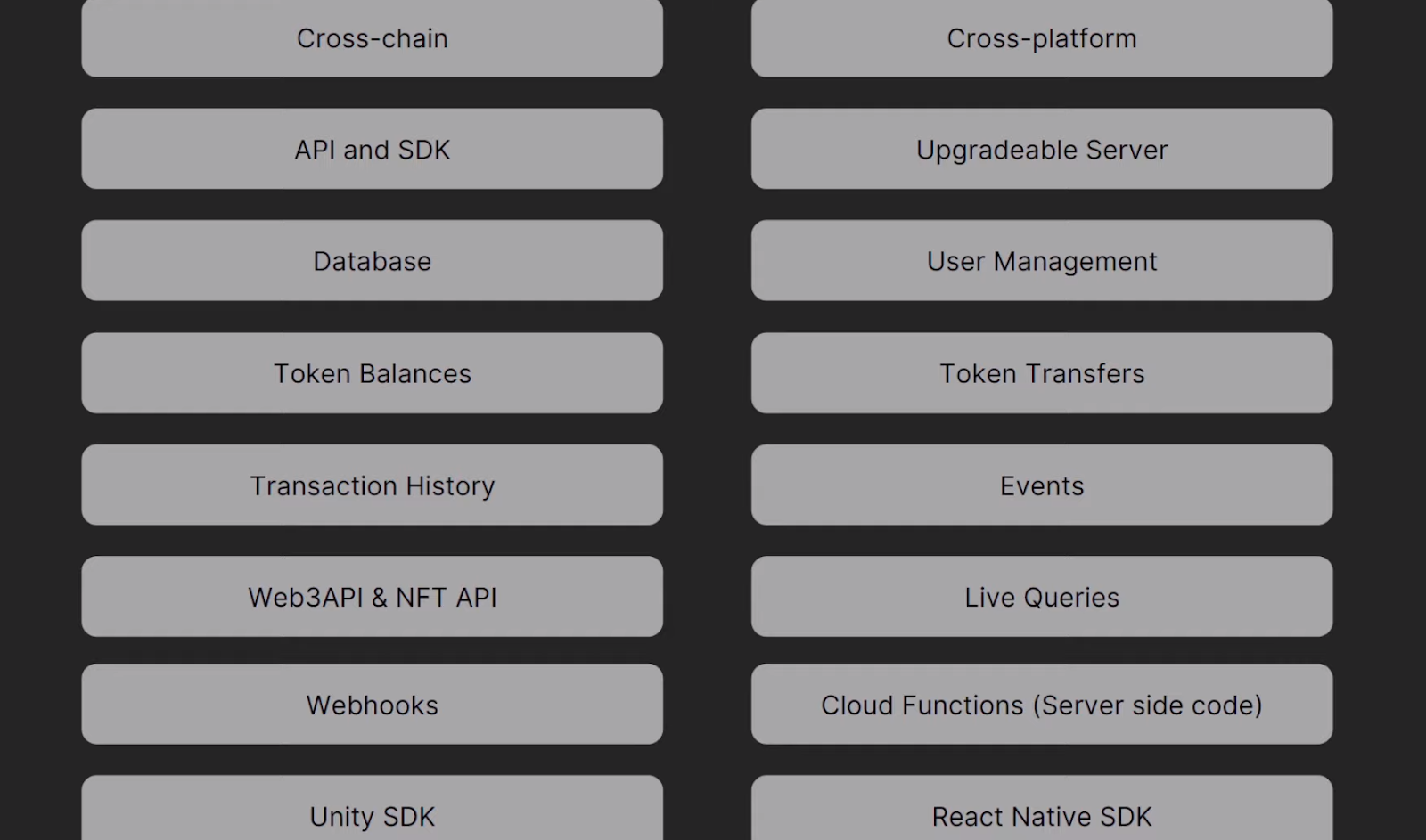 As such, make sure to join other developers that are using Moralis to make Web3 development simple: 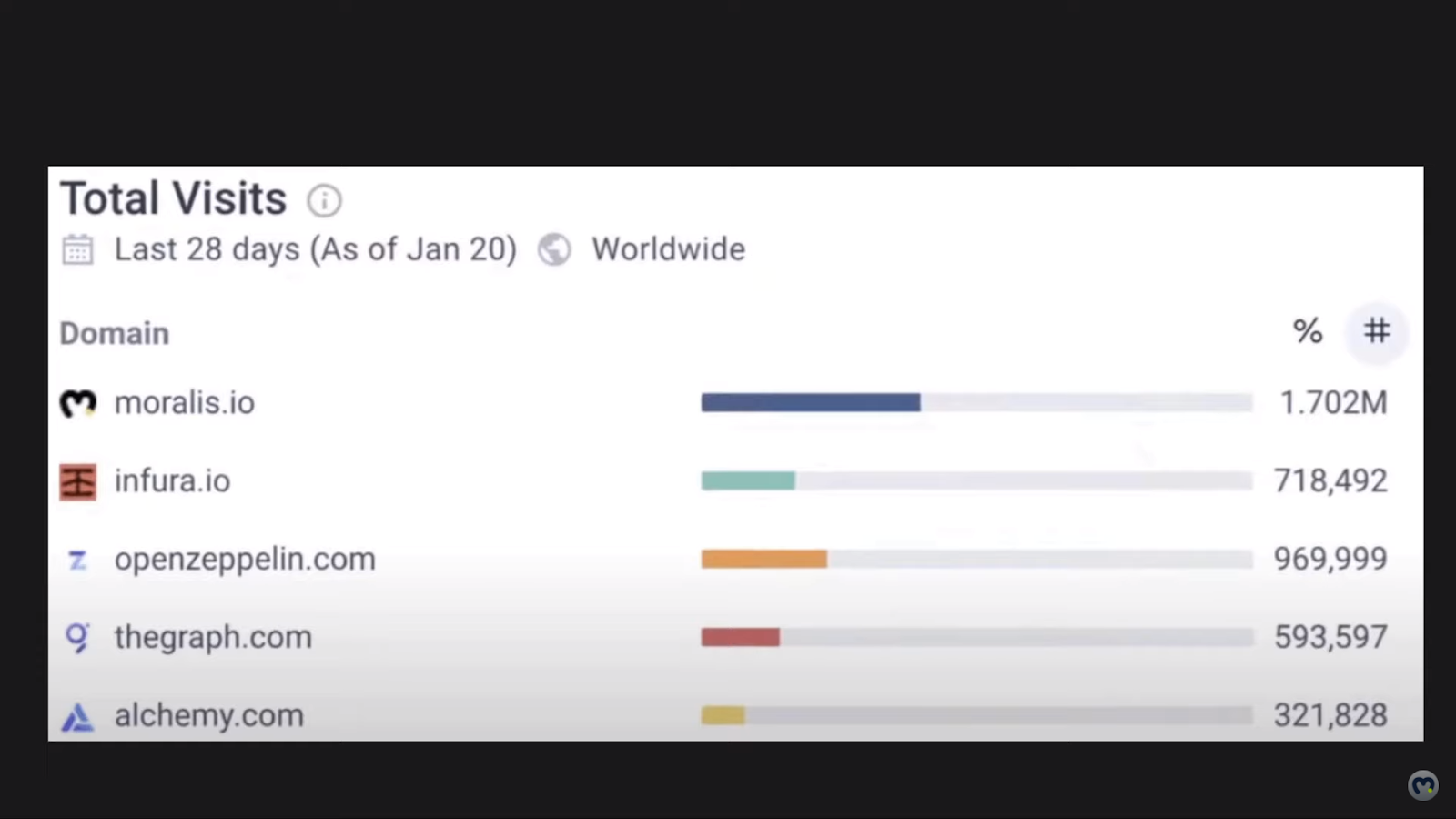 How to Start using the Best Web3 Backend Platform

When it comes to creating dApps, you have two options. You can either use the ultimate Ethereum dApp boilerplate or the Moralis Web3 API to build dApps from scratch. Either way, you need to complete the initial setup. To make it as straightforward as possible for you, we’ve broken it down into two parts.

After selecting the server type, you’ll see a pop-up window asking for server details. Thus, enter your server’s name and select your region, network, and chain(s): 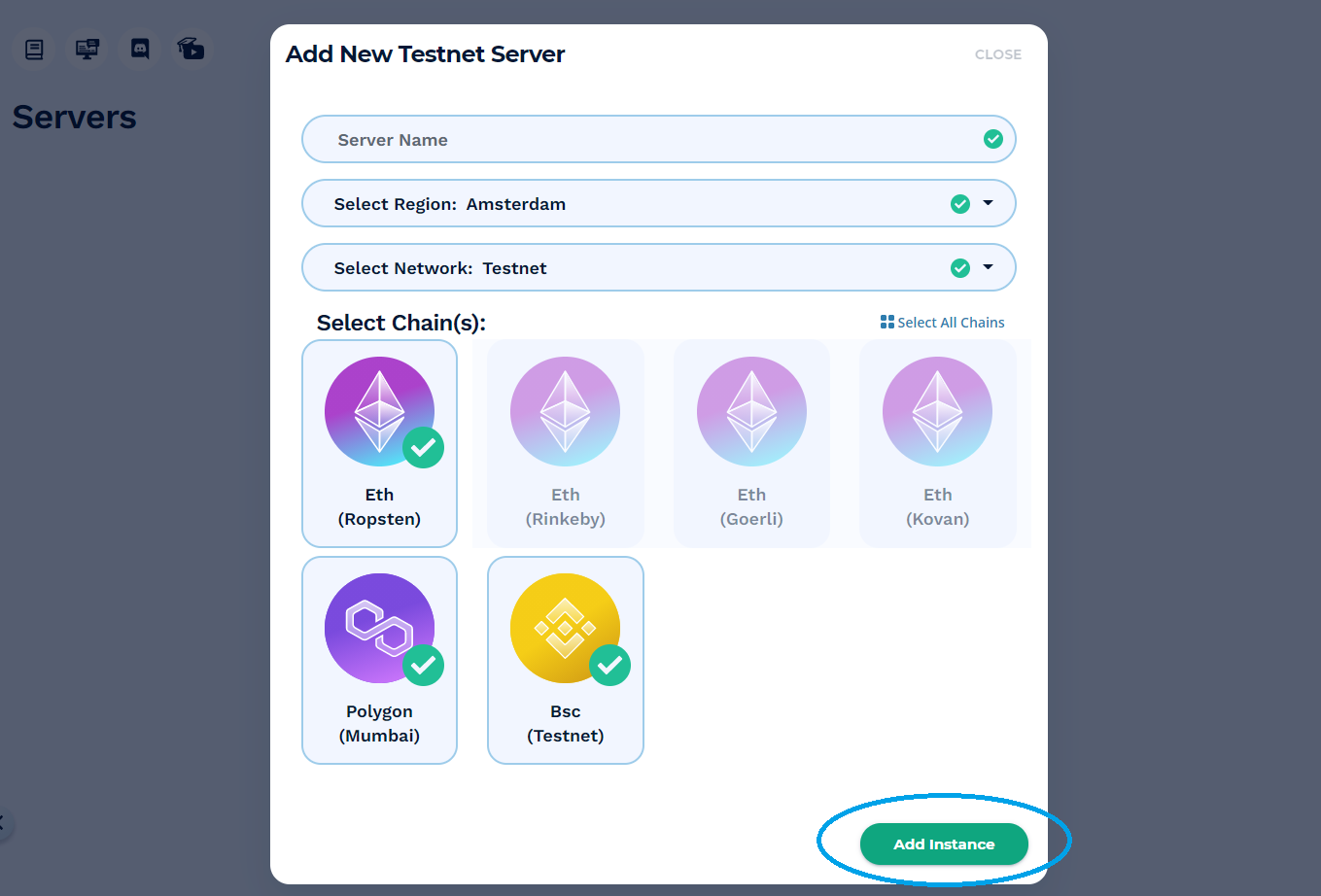 Finally, you start your server by clicking on the “Add Instance” button. Note that it may take some time for the server to spin up.

The details will be displayed in a new pop-up window. There are copy icons set in place to copy the details in question:

Note: Make sure to use the details of your server and NOT the details from the image above.

Moving forward, we encourage you to put the above instructions to use and create your first dApp as soon as possible. As such, you’ll get familiar with the use of your newly obtained arsenal. However, if you don’t know where to start, we recommend you seek guidance on the Moralis YouTube channel and the Moralis blog. Both of these outlets offer countless example projects. Thus, you can follow along with Moralis experts as they create different interesting example dApps. In addition, our content is also a great way to continue your free blockchain education. For instance, some of our latest topics cover Web3 gamification, NFT game characters, how to mint 10,000 NFTs, Web3 data science, top blockchain APIs, ERC721 smart contracts, upgradable smart contracts, how to get OpenSea API key, and much more. 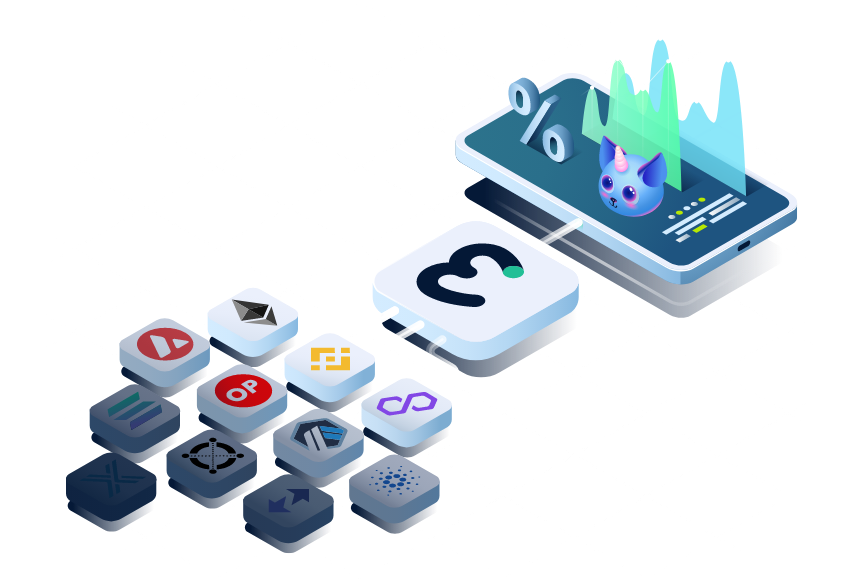 We’ve covered quite a lot of ground in this article. In case you are a Web2 frontend developer looking to become a blockchain developer, you must be pretty excited at this point. Knowing that there is a Web3 backend platform that enables you to use your JavaScript skills to create cross-chain operable dApps is quite remarkable. By creating your free Moralis account and firing up your server, you are all set, and you can start using the best Web3 backend platform instantaneously. Then you can start from scratch or even cut down your development time further by using the Ethereum boilerplate. Furthermore, now that you know that you don’t need to worry about the Web3 backend yourself, make sure to bring your “A-game” to the frontend.