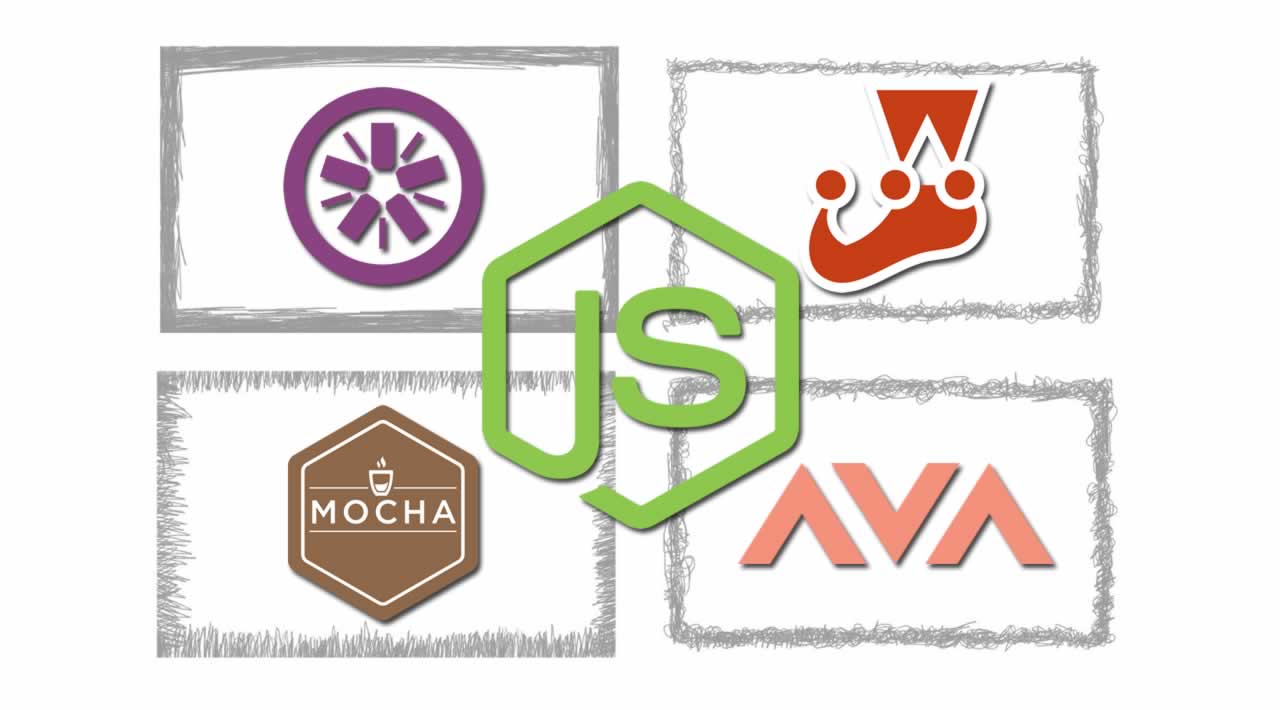 In this Node.js unit testing tutorial, you'll see top 4 unit testing frameworks for Node.js. We will compare some of the most popular and widely used frameworks: Jasmine, Jest, AVA, and Mocha.

If you are reading this article, you probably know what Node.js is. Node.js is often used in creating APIs. It has steadily grown in popularity since its initial release in 2009.

In this post, we will be looking at unit testing in Node.js. For those of you who don’t know, unit testing is a software testing method where individual pieces of code (usually the smallest piece of code that can be logically isolated in a system) are tested in isolation. Unit tests should be isolated such that there are no external dependencies. Let’s look at some advantages and disadvantages of unit testing.

Testing frameworks provide a set of reusable components or modules such as test runners and utilities for running automated tests. The testing framework is responsible for:

They are particularly useful when tests are an integral part of your continuous integration process. Frameworks are built for a specific type of testing; unit, integration, functional or combinations of these.

What makes a good testing framework?

Testing frameworks are a dime a dozen. In order to pick something that works for your use case, you need to evaluate each framework based on your needs and characteristics. Below are a few points that are essential for a good testing framework:

According to the State of JS 2018 survey, the most popular JavaScript testing frameworks and libraries are:

In this post, we will compare some of the most popular and widely used frameworks; Jasmine, Jest, AVA, and Karma.

Jest is a JavaScript testing framework developed and maintained regularly by FACEBOOK. It rose in popularity in 2017. In 2016, only 6% of people surveyed for the State of JS had used Jest before as opposed to 25% in the 2017 survey. It is based on Jasmine but has been greatly improved since the early days.

Jasmine, on the other hand, has been around for a lot longer. It was developed by Pivotal Labs and released in 2010. It aims to run on any JavaScript-enabled platform and is highly flexible and compatible with a variety of other testing frameworks and libraries like Sinon and Chai. Additionally, due to its longevity, it has developed a significant community and support around it with lots of libraries, blog articles, and tutorials.

Minimalism is the focus of AVA. It has a simple API while still supporting advanced features. It is quite fast and achieves this by running tests in parallel as separate Node.js processes. Unlike other testing frameworks such as Jest and Jasmine, it does not create test globals.

Mocha, like Jasmine, has been in existence for quite a while. It was initially released in November 2011. However, unlike other frameworks like Jest and Jasmine, it relies on third-party assertions, mocking, and spying tools(Spies are objects that keep track of their interaction with other objects or pieces of code. They keep a record of things such as the number of calls, arguments passed to specific functions and return values which can be used to make assertions.) e.g Sinon and Chai. It is very extensible and has a lot of plugins, extensions, and libraries designed to run on top of it.

The table below shows a comparison of the features across the different frameworks: 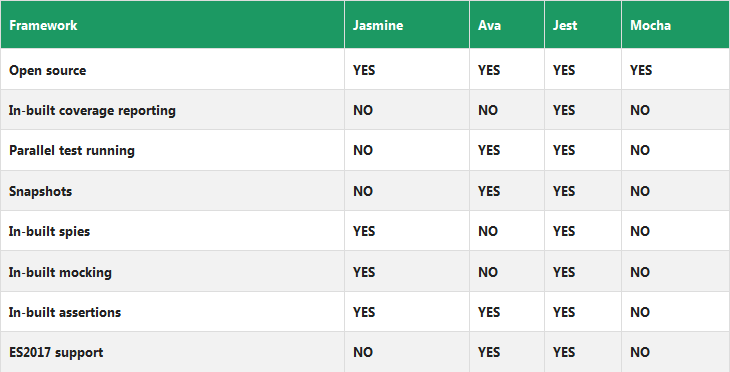 The best framework can vary based on your needs, project size, and other factors. What works now might not work in the future. It is important to take both your current and future needs into consideration when choosing the right framework.

If you want to hit the ground running, you cannot go wrong with Jest. It is an extremely fast framework, easy to set up and has a lot of built-in features to help you with your testing.

When it comes to simplicity, AVA is your cup of tea. It is minimal, simple, but capable of handling various types of test. It is also fairly fast.

Mocha is the best choice for someone that wants flexible configurations as well as a choice of libraries to use together with it.

There are very many frameworks and libraries that you can use to test your Node.js projects. In this article, we have focused on four of the most popular frameworks. Remember, your choice of testing framework will depend on your needs. In some cases, some libraries will be deficient and in others, they will be overkill.

Simpliv offers solid learning on the basics of Selenium Automation Scripts and how they help automate the browser. By the end of this highly practical course, you will be able to build a Testing Framework from scratch. All at just $9! Enroll today!