ES2019 Features: What Even Are They? by Tara Z. Manicsic

Thankfully, every year ECMAScript gives us new shinies to advance how we code JavaScript. I’ve found myself digging into features & proposals ever since my curiosity of ES2017’s SharedArrayBuffer took me down a fascinating rabbit hole. Let’s delve into some of the features & proposals we get to look forward to in 2019. 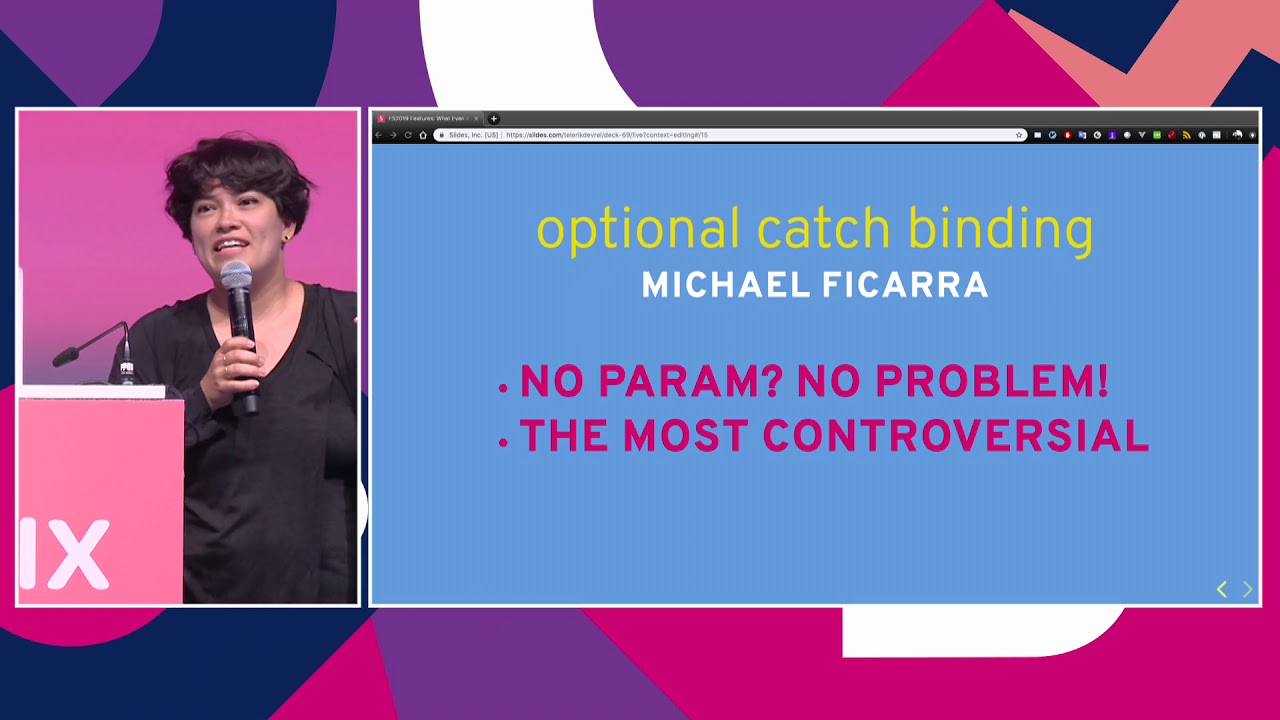 A Look at an ES2022 Feature: Class Static Initialization Blocks

This is not intended as a replacement for public fields, as they provide useful information for static analysis tools and are a valid target for decorators. Rather, this is intended to augment existing use cases and enable new use cases not currently handled by that proposal.

For detailed status of this proposal see TODO, below.

The current proposals for static fields and static private fields provide a mechanism to perform per-field initialization of the static-side of a class during ClassDefinitionEvaluation, however there are some cases that cannot be covered easily. For example, if you need to evaluate statements during initialization (such as try..catch), or set two fields from a single value, you have to perform that logic outside of the class definition.

In addition, there are cases where information sharing needs to occur between a class with an instance private field and another class or function declared in the same scope.

Static blocks provide an opportunity to evaluate statements in the context of the current class declaration, with privileged access to private state (be they instance-private or static-private):

The Private Declarations proposal also intends to address the issue of privileged access between two classes, by lifting the private name out of the class declaration and into the enclosing scope. While there is some overlap in that respect, private declarations do not solve the issue of multi-step static initialization without potentially exposing a private name to the outer scope purely for initialization purposes:

In addition, Private Declarations expose a private name that potentially allows both read and write access to shared private state when read-only access might be desireable. To work around this with private declarations requires additional complexity (though there is a similar cost for static{} as well):

In the long run, however, there is nothing that prevents these two proposals from working side-by-side:

The following is a high-level list of tasks to progress through each stage of the TC39 proposal process:

ES2019 Features: What Even Are They? by Tara Z. Manicsic

Thankfully, every year ECMAScript gives us new shinies to advance how we code JavaScript. I’ve found myself digging into features & proposals ever since my curiosity of ES2017’s SharedArrayBuffer took me down a fascinating rabbit hole. Let’s delve into some of the features & proposals we get to look forward to in 2019.

Getting Started With Feature Flags

As any developer can tell you, deploying any code carries technical risk. Software might crash or bugs might emerge. Deploying features carries additional user-related risk. Users might hate the new features or run into account management issues. With traditional deployments, all of this risk is absorbed at once.

Feature flags give developers the ability to separate these risks, dealing with one at a time. They can put the new code into production, see how that goes, and then turn on the features later once it’s clear the code is working as expected.

What is a Feature Flag?

Simply put, a feature flag is a way to change a piece of software’s functionality without changing and re-deploying its code. Feature flags involve creating a powerful “if statement” surrounding some chunk of functionality in software (pockets of source code).

The History of Feature Flags

Leading Web 2.0 companies with platforms and services that must maintain performance among high traffic levels led the way in regard to developing and popularizing new deployment techniques. Facebook, in particular, is known as a pioneer of feature flags and for releasing massive amounts of code at scale. While building its massive social network more than a decade ago, the company realized that its uptime and scale requirements could not be met with traditional site maintenance approaches. (A message saying the site was down while they deployed version 3.0 was not going to cut it).

Instead, Facebook just quietly rolled out a never-ending stream of updates without fanfare. Day to day, the site changed in subtle ways, adding and refining functionality. At the time, this was a mean feat of engineering. Other tech titans such as Uber and Netflix developed similar deployment capabilities as well.

The feature flag was philosophically fundamental to this development and set the standard for modern deployment maturity used by leading organizations everywhere today. Recently, feature flags have been used in tandem with continuous delivery (CD) tools to help forward-looking organizations bring features, rather than releases, to market more quickly.

There are a wide number of dating apps around the world, but only Tinder became successful. Do you know the reason for its success? The primary reason why tinder is able to attract users around the globe is because of its simple yet attractive features.

Due to distinct features along with the highly-interactive UI UX, millions of users are getting attracted to this dating app.

Do you want to know the features present in the most popular dating app in the world, then we have got you covered. Here, we have made an exclusive list of all the Tinder Features.

According to a survey in Forbes, data scientists spend 80% of their time on data preparation. This shows the importance of feature engineering in data science. Here are some valuable quotes about Feature Engineering and its importance:

The features you use influence more than everything else the result. No algorithm alone, to my knowledge, can supplement the information gain given by correct feature engineering — Luca Massaron

What is Feature Engineering?

Feature engineering is the process of transforming raw data into features that better represent the underlying problem to the predictive models, resulting in an improved model accuracy on unseen data.

Basically, all machine learning algorithms use some input data to create outputs. This input data comprises features, which are usually in the form of structured columns. Algorithms require features with some specific characteristic to work properly

Having and engineering good features will allow us to most accurately represent the underlying structure of the data and therefore create the best model. Features can be engineered by decomposing or splitting features, from external data sources, or aggregating or combining features to create new features.