The New UI Design and UX Improvement, Part I

Have you already noticed the Vertabelo Database Modeler has a new look now? The entire graphic design changed significantly at the end of January.

Over the past few years, we have been observing how the previous interface worked and paying great attention to the experience of our users. Equipped with the knowledge we have gathered, we developed a completely new graphic design of our ERD tool and implemented several ergonomic improvements to individual functional elements.

From a visual standpoint, the application has changed completely. It now has a modern, clear design, allowing users to work on database modeling comfortably for many hours.

From a functional standpoint, we adopted an evolutionary approach. If something worked well (about 80% of the features), we left it unchanged. Functional changes were introduced only in those areas where we saw the potential for significant improvement in user experience.

The UI and UX changes described in this article affect all ACCOUNT PLANS (Team, Premium, Basic).

The first part of the design and user interface changes included the following:

Make sure to CHECK OUT THE NEW VERTABELO DESIGN!

What Will Change Soon

We are not stopping at the changes described above. In the coming months, we will implement further elements of the new design and changes in the user interface. These changes will cover the following areas:

Details of the Changes

Below, you can see in detail what has changed recently in the Vertabelo Database Modeler.

Changes in the Top Menu

The top menu has been significantly modified. We identified options that were not used very often and moved them to the drop-down menu on the right. 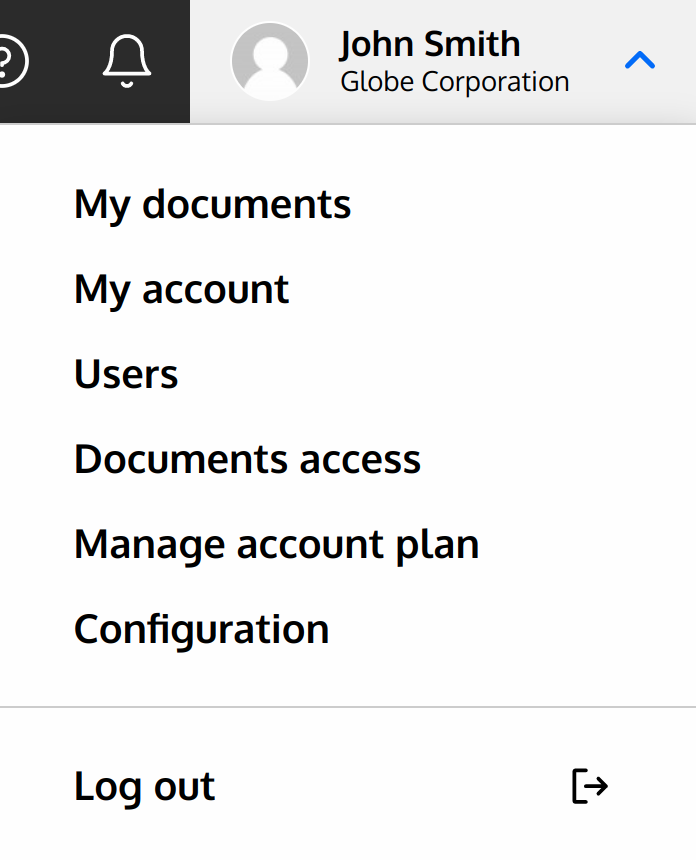 This allowed us to save the extra space needed for the logical and physical model screens. Moreover, we placed the File menu (which was previously in the toolbar) in the top menu (more on that later). In the future, we will also put the Take control mechanism here. Clicking on the logo works the same way as it used to – it will return you to the start screen (the document list).

Below, you can see the top menu in the old version:

And in the new version:

Changes in the Physical Model Screen

The design change affected all components of this screen: left-hand navigation tree, problem panel, toolbar, toolbox, and right-hand panel. We simplified it as much as possible to increase the readability of individual elements. This allows the user to focus on the diagram and specific model properties rather than on the details of the user interface.

Below, you can see the old version of the physical model screen:

And the new one:

The biggest ergonomic change affects the right-hand panel and the way particular properties are edited – more on this later in this article.

The File menu was previously on the toolbar. It has now been moved to the main top menu. This applies both to the physical and logical model. The old file menu looks like this: 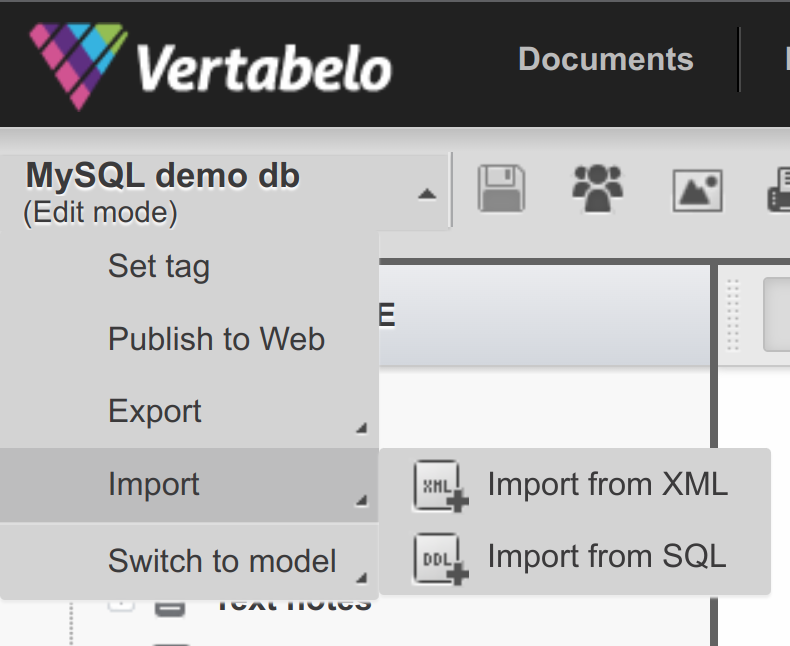 And this is the new File menu:

This change is related to the planned development of the Vertabelo Database Modeler, in which the diagram window will be only one of the possible views of the edited database model. This means the toolbar will play a slightly different role for each of the available views. Also, note the File menu is related to the model as a whole and not just to the diagram, as it contains options such as exporting and importing a model from a file.

At the same time, this change allows for a more readable presentation of the File menu. It also creates more space on the toolbar to be used for new functionalities.

Switching Individual Panels on and off

The visibility controls for the right- and left-hand panels and the top menu have changed. Now, the top menu can be hidden using the third button

in the toolbar instead of the dedicated arrow that used to be there. Also, the behavior of the buttons that control the panel visibility has changed. In the new design, the buttons are not binary (pressed/unpressed); instead, they signal the option to perform an opposite action with a blue color

. To compare, the old buttons used for switching panels on and off looked like this:

The right-hand panel has changed – it has been simplified and reorganized. This is how it looked in the old version:

This is the panel in the new version:

Also, the appearance of pop-ups from this panel has changed. They have also been visually streamlined. This is the old version: 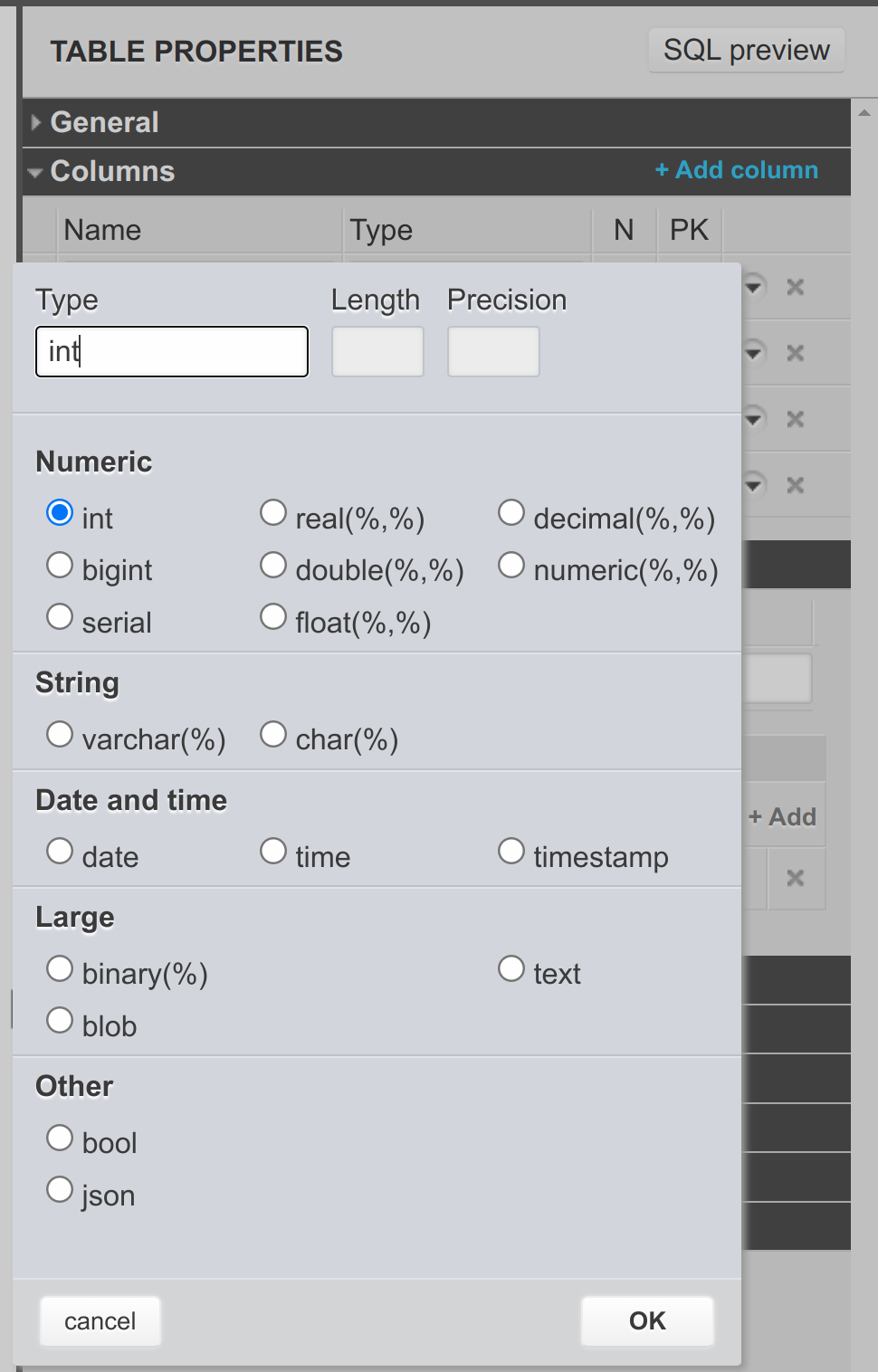 And this is the new version: 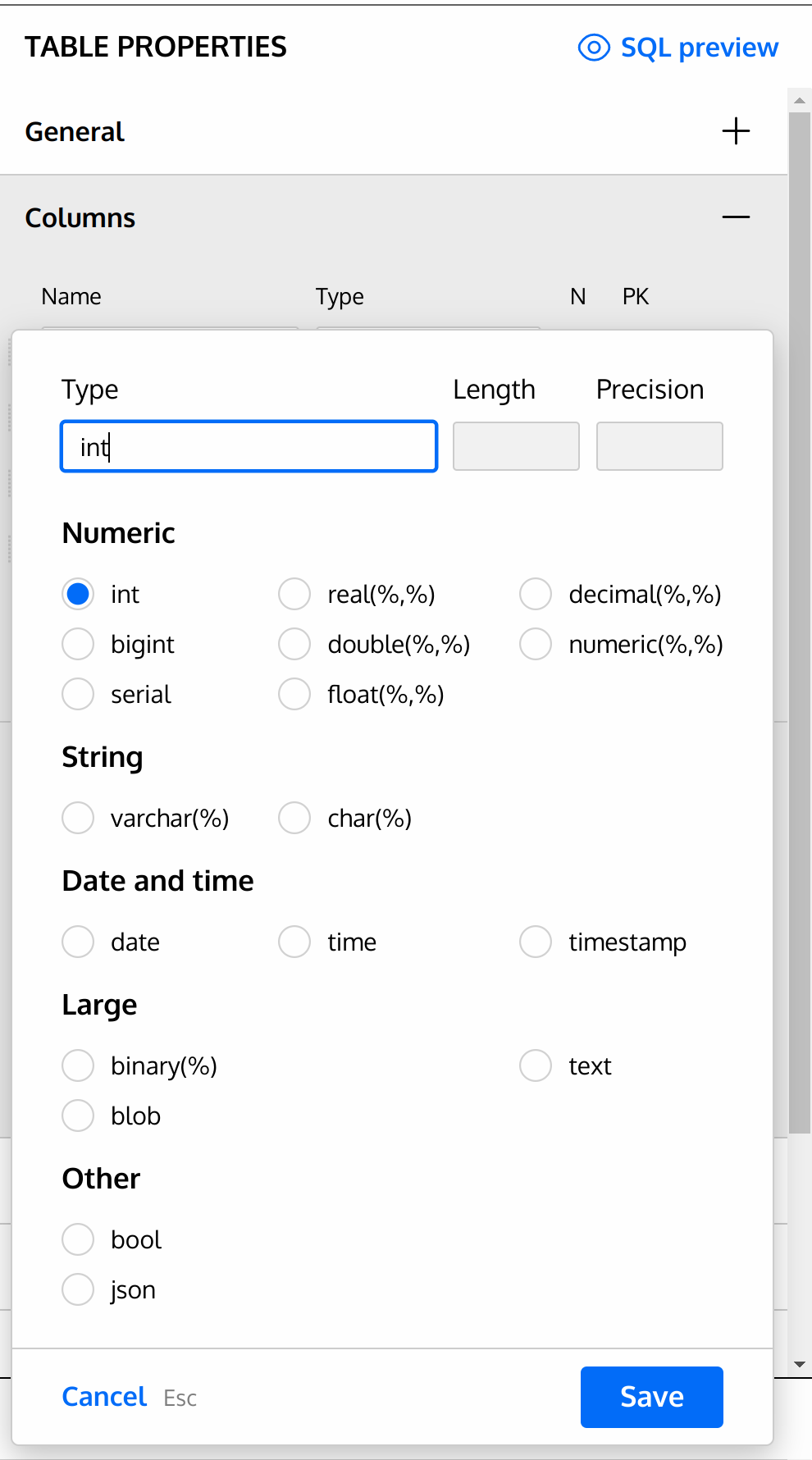 Changes in the way Key and Index Columns Are Edited

Not only has the general design changed, but we also modified the way columns are added to keys (primary and alternative) and indexes. The on-the-spot editing in the previous version was confusing for the users; it was not clear whether it was already a column of the index or only a possible candidate.

The new version introduces adding columns to the keys/indexes using an additional layer displayed. This solution gives a clear separation of information; after entering the key/index, the user can see what columns are included in it. Also, when adding a column, there is no doubt we are in the process of adding a new column to the key or index. Similar mechanisms are also used for the analogous elements of the logical model.

Below, you can see the process of adding a column to an index in the old version: 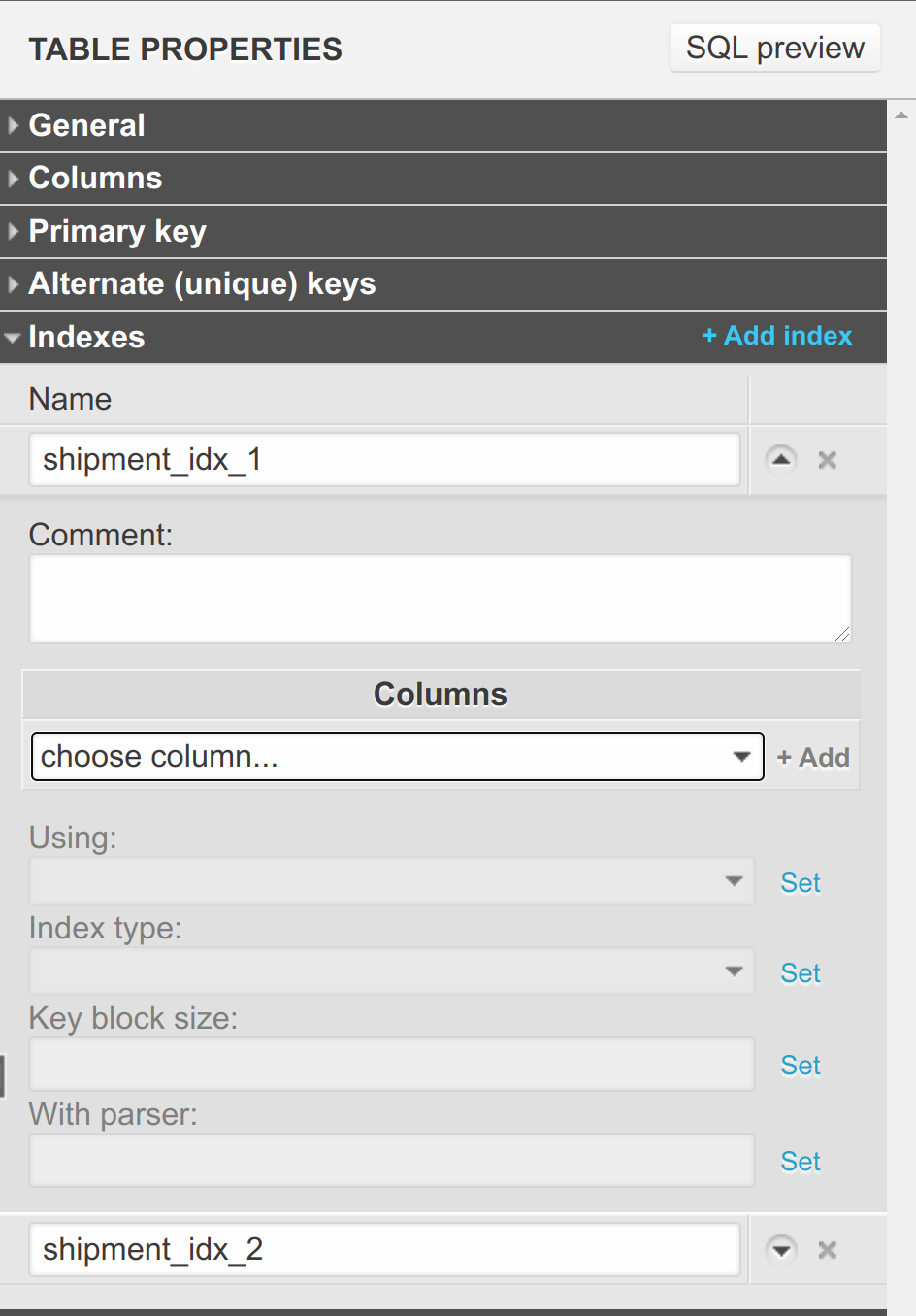 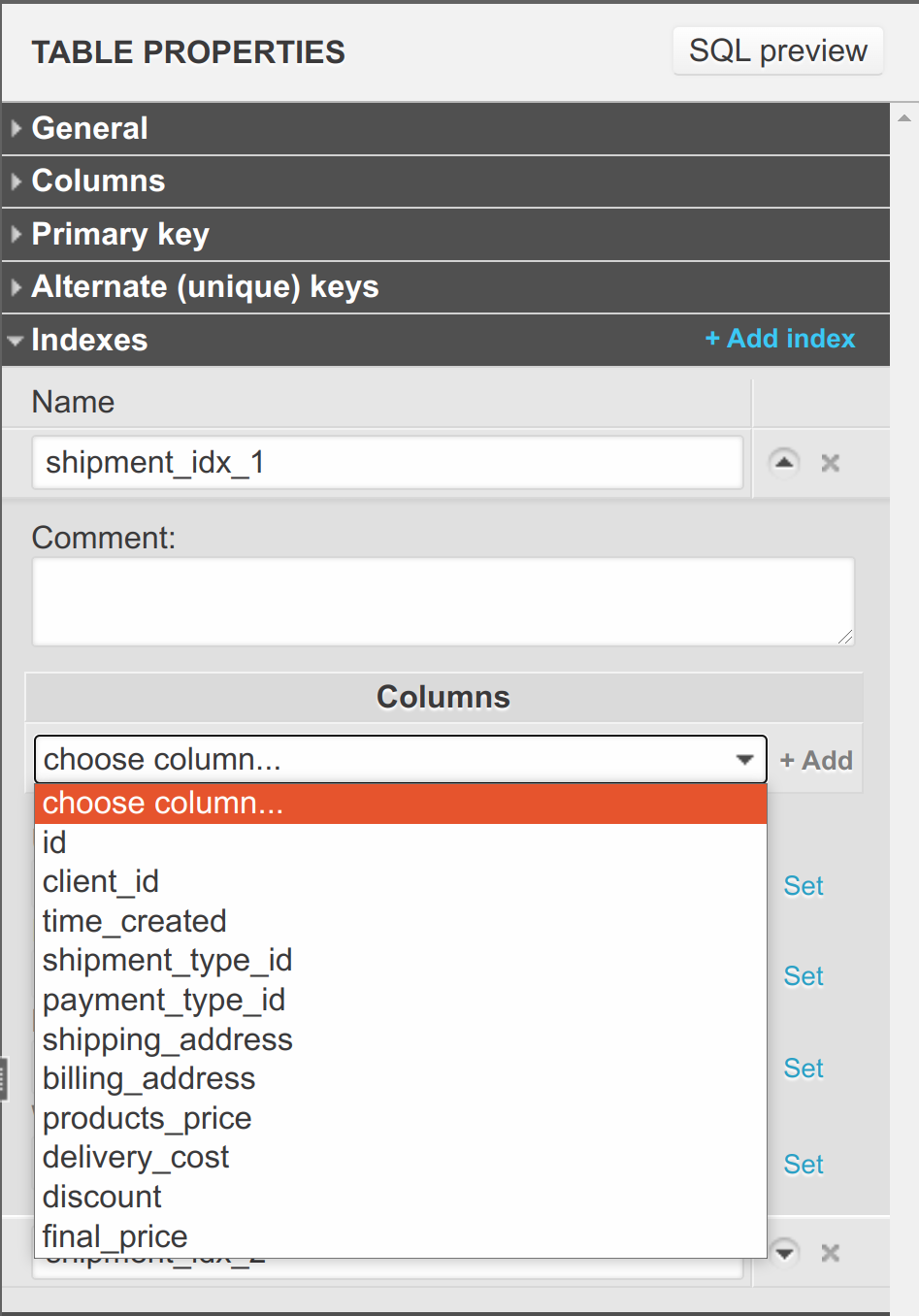 And in the new version: 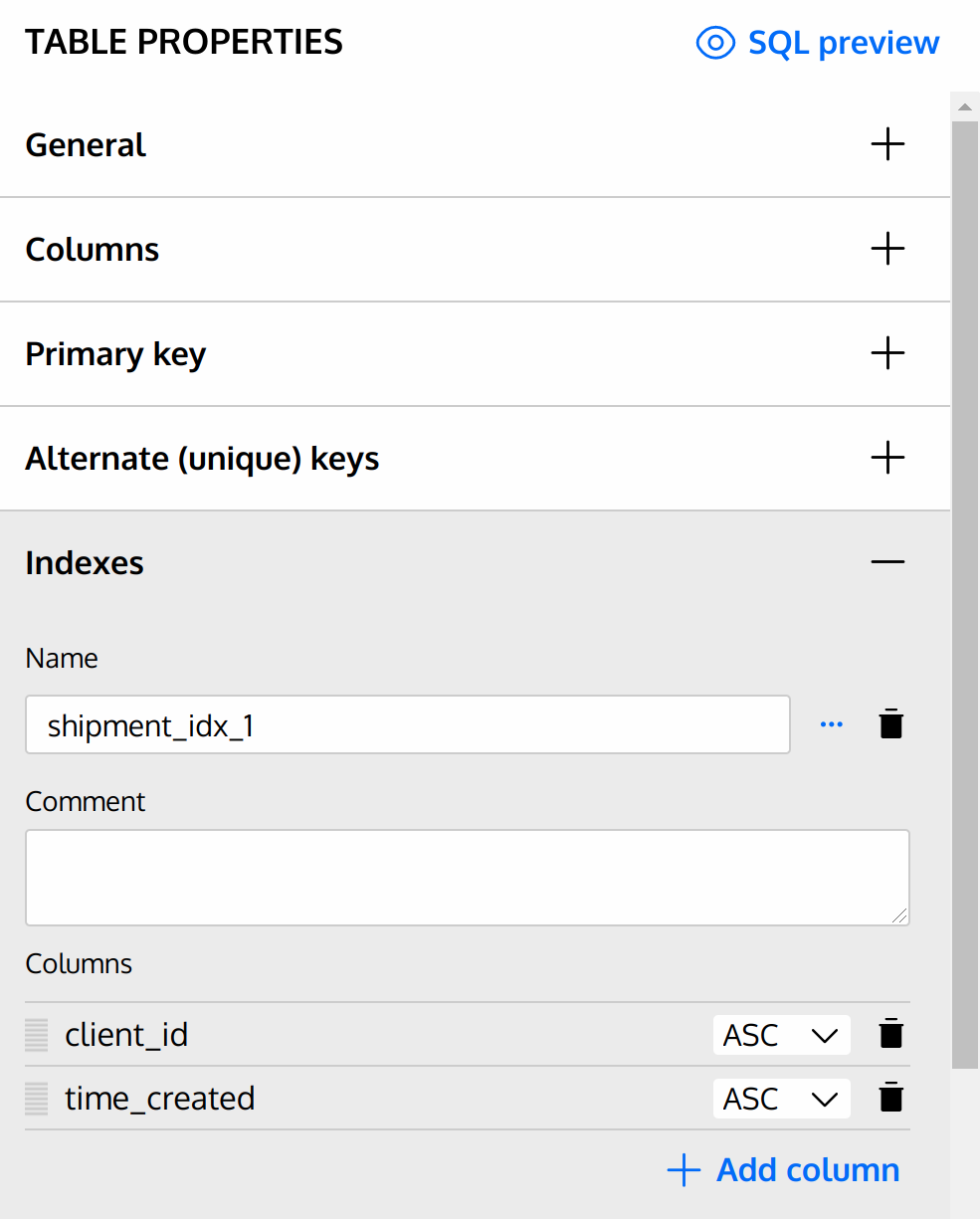 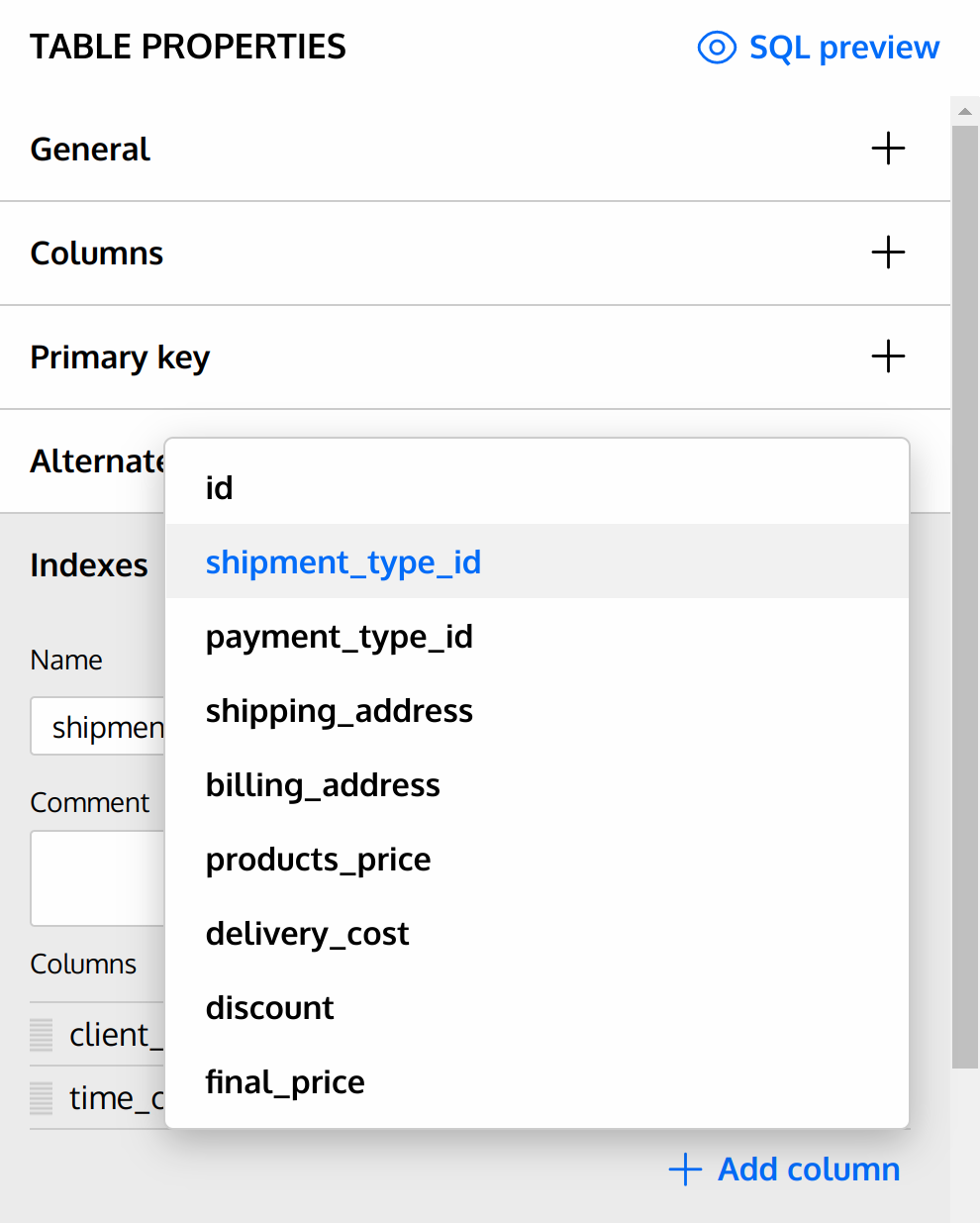 Changes in the Logical Model Screen

Like with the physical model screen, the design change covered all elements of this screen: left-hand navigation tree, problem panel, toolbar, toolbox, and right-hand panel. The biggest ergonomic changes concern the details of editing individual properties (right-hand panel). They are analogous to those discussed above in the section related to the physical model screen.

Below, you can see the old logical model screen version:

And the new one:

Changes in the SQL Editor Screen

As discussed above in the sections on logical and physical model screens, the File menu from the toolbar has been moved to the top menu. The toolbar, on the other hand, has been enhanced with new Undo/Redo options

See screenshots below for comparison. This is the old version:

This is the new version:

That’s all for now! If you haven’t yet done so, be sure to CHECK OUT THE NEW VERTABELO DESIGN and start your database design! Stay tuned as more design changes are coming soon Are you looking for the Top UI/UX Designing Companies in New York? Hence, finding the Top UI/UX Designing Company in New York is not an easy job, as the USA is one of the largest technology hubs in the software technology design & development industry. To make it easy for you, we have picked the top 5 UI/UX designing companies from New York that will help to create your dream mobile app designs.

Please go through the below link for further details of Top UI/UX Designing companies.

Looking to build a user-engaging UI/UX design for your mobile application? Then AppClues Infotech is the Best UI/UX Design Services Agency in New York that builds creative & user-friendly mobile app design as per your needs & specifications at an affordable price.

In this digital age merely an online business presence is not sufficient for business growth. The digital resource should be interactive, elegant, and easy to use.

Who would be able to create such an experience? UI/UX Designer

Want to develop a unique and elegant design for your website or App?

Get in touch with WebClues Infotech