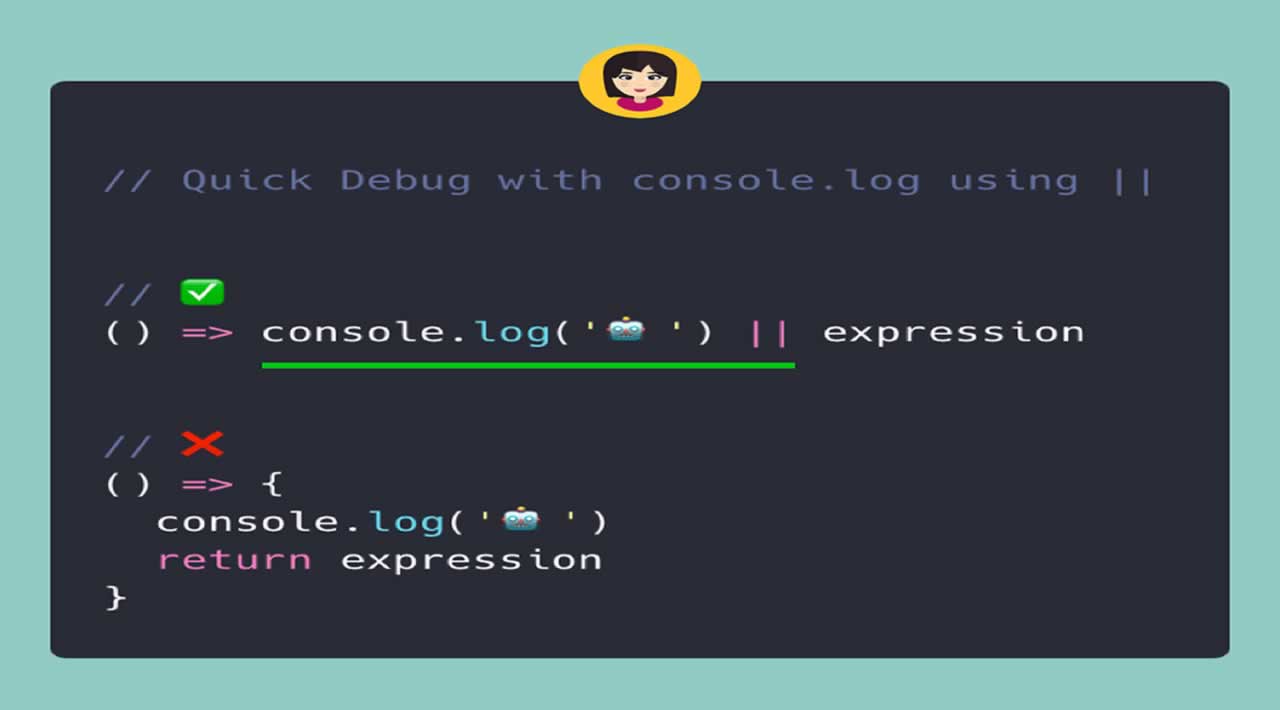 It’s always a pain to debug 1-line arrow function with a console.log. Why? b/c we need to convert it to a multi-line first. No more! Just use <code>||</code> before your expression. It outputs both your <code>console.log</code> and expression 👍

It’s always a pain to debug 1-line arrow function with a console.log. Why? b/c we need to convert it to a multi-line first. No more! Just use || before your expression. It outputs both your console.log and expression 👍

And clean up is a breeze! No more messy re-conversion back to a 1-line. Just remove your console.log. And you’re done 😆

Let’s take a look at a simple example of how this would work:

Often times we think the || operator is only used in conditional statements. However, you can also think of it as a selector operator. It will always evaluate one of the 2 expressions.

Because console.log always return undefined, which is a falsy value. The second expression will always be evaluated 👍

To learn more about the || operator, check out my previous post here

@phenax5: You can also use the comma operator. Separate two expressions with a comma and it will execute the first one and then the second and return with the second one.

And let me break up the example so it’s very clear where the 2 expressions are:

But make sure you don’t do this. I made that mistake when I first saw his example. You don’t want to stick the expression inside the console.log. If you do that, your function would not return anything and nothing would be evaluated. Hence, breaking your function. So be careful with your comma placement 😅

If you’re working with TypeScript and depends on how you set it up. Using this debugging technique might give you an error and prevent your code from compiling. In that case, you can suppress the error using ts-ignore.

Using ts-ignore should no be a huge deal in this case because the console.log is only there temporarily while you debug. Once you’re done, you should definitely remove it.

☞ An Introduction to Functional JavaScript

☞ Building a chat widget with Go and JavaScript 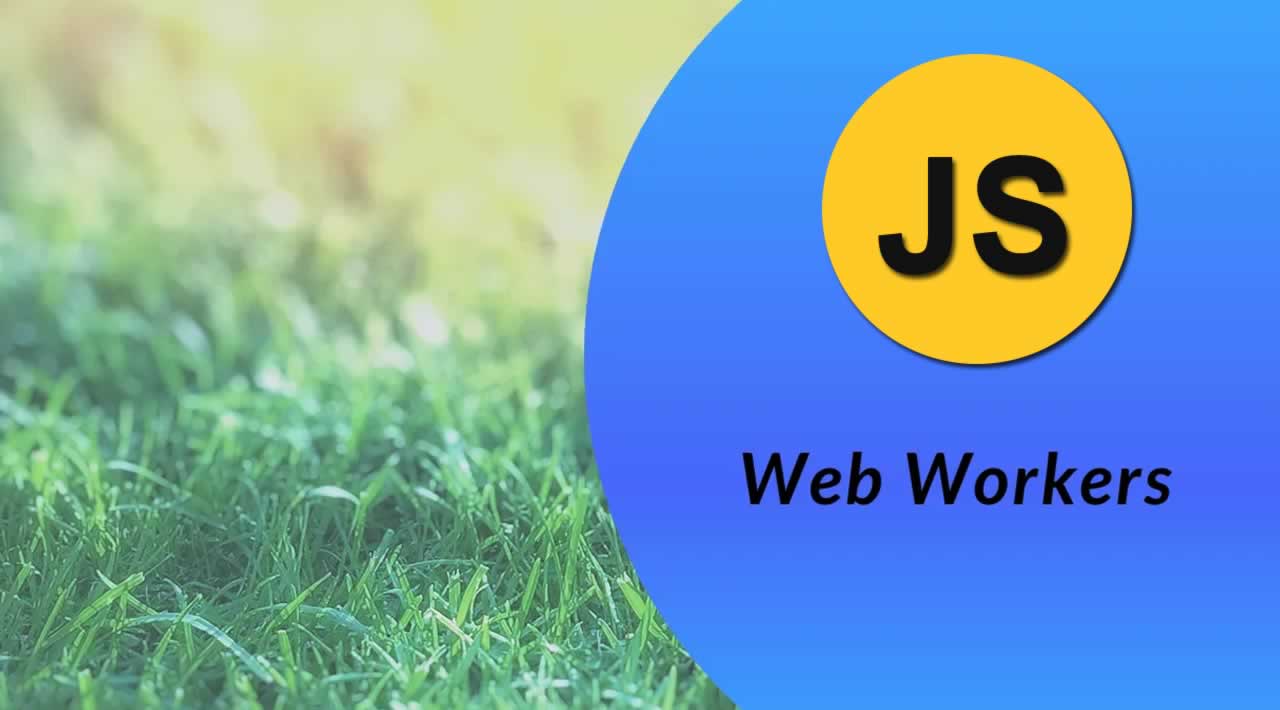 So, Web Workers. Those wonderful little critters that allow us to execute JavaScript off the main thread.

Also known as “no, you’re thinking of Service Workers”.

Photo by Caleb Jones on Unsplash

Before I get into the meat of the article, please sit for a lesson in how computers work:

For the red/green colourblind, let me explain. While a CPU is doing one thing, it can’t be doing another thing, which means you can’t sort a big array while a user scrolls the screen.

This is bad, if you have a big array and users with fingers.

Enter, Web Workers. These split open the atomic concept of a ‘CPU’ and allow us to think in terms of threads. We can use one thread to handle user-facing work like touch events and rendering the UI, and different threads to carry out all other work.

Check that out, the main thread is green the whole way through, ready to receive and respond to the gentle caress of a user.

You’re excited (I can tell), if we only have UI code on the main thread and all other code can go in a worker, things are going to be amazing (said the way Oprah would say it).

But cool your jets for just a moment, because websites are mostly about the UI — it’s why we have screens. And a lot of a user’s interactions with your site will be tapping on the screen, waiting for a response, reading, tapping, looking, reading, and so on.

So we can’t just say “here’s some JS that takes 20ms to run, chuck it on a thread”, we must think about where that execution time exists in the user’s world of tap, read, look, read, tap…

I like to boil this down to one specific question:

Is the user waiting anyway?

Imagine we have created some sort of git-repository-hosting website that shows all sorts of things about a repository. We have a cool feature called ‘issues’. A user can even click an ‘issues’ tab in our website to see a list of all issues relating to the repository. Groundbreaking!

When our users click this issues tab, the site is going to fetch the issue data, process it in some way — perhaps sort, or format dates, or work out which icon to show — then render the UI.

Inside the user’s computer, that’ll look exactly like this.

Look at that processing stage, locking up the main thread even though it has nothing to do with the UI! That’s terrible, in theory.

But think about what the human is actually doing at this point. They’re waiting for the common trio of network/process/render; just sittin’ around with less to do than the Bolivian Navy.

Because we care about our users, we show a loading indicator to let them know we’ve received their request and are working on it — putting the human in a ‘waiting’ state. Let’s add that to the diagram.

Now that we have a human in the picture, we can mix in a Web Worker and think about the impact it will have on their life:

First thing to note is that we’re not doing anything in parallel. We need the data from the network before we process it, and we need to process the data before we can render the UI. The elapsed time doesn’t change.

(BTW, the time involved in moving data to a Web Worker and back is negligible: 1ms per 100 KB is a decent rule of thumb.)

So we can move work off the main thread and have a page that is responsive during that time, but to what end? If our user is sitting there looking at a spinner for 600ms, have we enriched their experience by having a responsive screen for the middle third?

I’ve fudged these diagrams a little bit to make them the gorgeous specimens of graphic design that they are, but they’re not really to scale.

When responding to a user request, you’ll find that the network and DOM-manipulating part of any given task take much, much longer than the pure-JS data processing part.

I saw an article recently making the case that updating a Redux store was a good candidate for Web Workers because it’s not UI work (and non-UI work doesn’t belong on the main thread).

Chucking the data processing over to a worker thread sounds sensible, but the idea struck me as a little, umm, academic.

If the first scenario, a user taps a button on the screen — perhaps to change the sort order of a list. The store updates, and this results in a re-rendering of the DOM (since that’s the point of a store).

Let me just delete one thing from the previous diagram:

In my experience, it is rare that the store-updating step goes beyond a few dozen milliseconds, and is generally followed by ten times that in DOM updating, layout, and paint. If I’ve got a site that’s taking longer than this, I’d be asking questions about why I have so much data in the browser and so much DOM, rather than on which thread I should do my processing.

So the question we’re faced with is the same one from above: the user tapped something on the screen, we’re going to work on that request for hopefully less than a second, why would we want to make the screen responsive during that time?

OK what about the second scenario, where a store update isn’t in response to a user interaction? Performing an auto-save, for example — there’s nothing more annoying than an app becoming unresponsive doing something you didn’t ask it to do.

Actually there’s heaps of things more annoying than that. Teens, for example.

Anyhoo, if you’re doing an auto-save and taking 100ms to process data client-side before sending it off to a server, then you should absolutely use a Web Worker.

In fact, any ‘background’ task that the user hasn’t asked for, or isn’t waiting for, is a good candidate for moving to a Web Worker.

The matter of value

If you’re using a bundler — and you are — you’ll have a lot of reading to do, and probably npm packages to install. If you’ve got a create-react-app app, prepare to eject (and put aside two days twice a year to update 30 different packages when the next version of Babel/Redux/React/ESLint comes out).

Also, if you want to share anything fancier than plain data between a worker and the main thread you’ve got some more reading to do (comlink is your friend).

What I’m getting at is this: if the benefit is real, but minimal, then you’ve gotta ask if there’s something else you could spend a day or two on with a greater benefit to your users.

This thinking is true of everything, of course, but I’ve found that Web Workers have a particularly poor benefit-to-effort ratio.

Hey David, why you hate Web Workers so bad?

This is a doweling jig:

But I don’t use it to eat breakfast. For that I use a spoon.

Four years ago I was working on some fancy animations. They looked slick on a fast device, but janky on a slow one. So I wrote fireball-js, which executes a rudimentary performance benchmark on the user’s device and returns a score, allowing me to run my animations only on devices that would render them smoothly.

Where’s the best spot to run some CPU intensive code that the user didn’t request? On a different thread, of course. A Web Worker was the correct tool for the job.

Fast forward to 2019 and you’ll find me writing a routing algorithm for a mapping application. This requires parsing a big fat GeoJSON map into a collection of nodes and edges, to be used when a user asks for directions. The processing isn’t in response to a user request and the user isn’t waiting on it. And so, a Web Worker is the correct tool for the job.

It was only when doing this that it dawned on me: in the intervening quartet of years, I have seen exactly zero other instances where Web Workers would have improved the user experience.

Contrast this with a recent resurgence in Web Worker wonderment, and combine that contrast with the fact that I couldn’t think of anything else to write about, then concatenate that combined contrast with my contrarian character and you’ve got yourself a blog post telling you that maybe Web Workers are a teeny-tiny bit overhyped.

☞ How to use Web Workers in Angular app