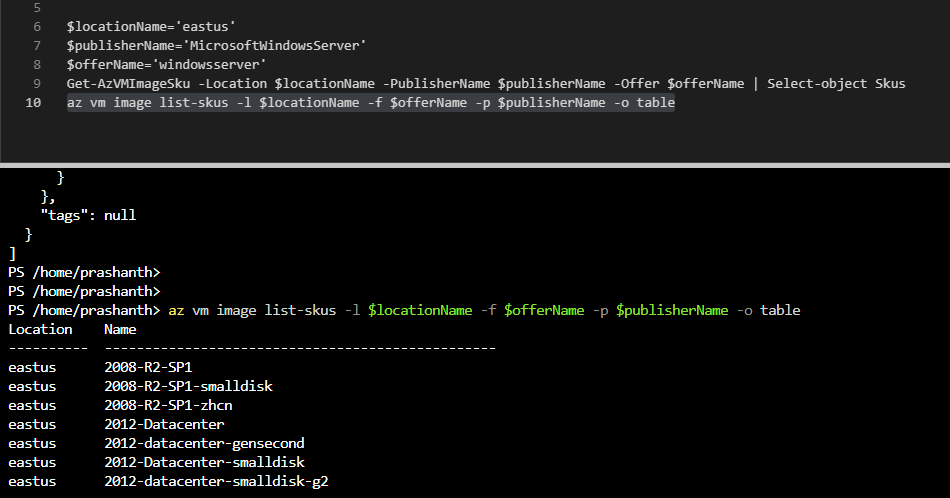 In this article, we will be acquainted with Azure PowerShell and understand how it is connected to Microsoft Azure. First, we will see how PowerShell becomes a one-stop automation solution for multiple vendors. Lastly, we will see how to get the Azure VM image.

The future of PowerShell is bright—the scale in which Cloud automation adoption with major tech giants such as Microsoft, Google, Amazon, and VMWare is seemingly much higher.

Cloud operations and Cloud automation using PowerShell redefined the scope of operations and automation responsibilities of cloud engineers and cloud administrators. As PowerShell continues to develop and evolve in the open-source world—there is no doubt that has a greater shift in the automation technology in terms of adoption and usability.

Microsoft cloud platform is a highly scalable workflow execution environment — Azure Automation provides a platform to allow you to orchestrate the deployment and manage the repeated tasks using run-books based on Windows PowerShell Workflow functionality. The run-books can significantly minimize human errors when carrying out repeated tasks and simplify the automation process.

The adoption of PowerShell

PowerShell became a first-class citizen in the recent past. Due to its simple constructs and ease of adopting the language, it becomes a complete cloud automation platform for the Azure Cloud platform. PowerShell is an automation and configuration framework provided by Microsoft. It comprises a command-line shell and a scripting language built on Microsoft .NET Framework.

PowerShell is used in Microsoft and non-Microsoft products. For example, VMware—one of Microsoft’s biggest competitors—uses PowerShell to automate and manage VMware vSphere through the PowerShell management interface known as PowerCLI.

The community developed PowerShell module is in use to manage Docker containers.

PowerShell support for AWS using AWS Tools provides a platform for many administrators and developers to manage the AWS services and resources. It has become one of the most powerful toolsets one should have it in their toolset to manage Windows, Linux, and macOS environments

Google Cloud also has Cloud Tools to support PowerShell. It is no different for you to script, manage, and automate the Windows workloads running on the GCP platform. The main intent of every provider is to provide an interface to underlying technology because we’re already more familiar with PowerShell, it is easy for us to automate, manage, administrator and customize Cloud platforms

This article has provided a whistle-stop tour of the benefits PowerShell brings to the table. Using PowerShell automation, one could easily automate the most common tasks. The future for PowerShell as the automation framework is bright. Shipping PowerShell core on the hybrid platform has opened up new markets, new customers, and new opportunities for Microsoft.