Which Application Is Best Between Roposo Or TikTok? 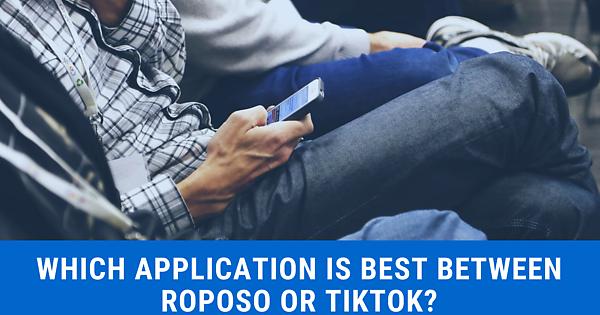 Government has recently imposed a ban on 59 Chinese applications. TikTok is amongst one such banned app that is popular amongst people in the country and over the world. This is not the first time when TikTok has created a buzz amongst the market. Soon after the government announced the ban, TikTok was unitedly rejected by every citizen causing poor rating and feedback on Google Play Store.

Many stakeholders have rolled their dice with their unique apps in a hope to create a similar user base and gain popularity. Roposo is one such app similar to TikTok. The Indian replacement of Chinese TikTok is being accepted by the users countrywide, post-ban. The apps share a similar platform allowing users to create, upload and share short video clips with other users.

This article is written with an intention to inform the readers about the new TikTok replacements. The article is also beneficial for the start-ups or enterprises looking to invest in an app as a business asset for revenue generation. Also, the role of the TikTok clone script in the development process is mentioned below.

There are many video creating and sharing applications similar to TikTok that are being introduced in the market post-ban of TikTok. Most of the apps share a similar user interface that TikTok boasted.

However, there are these unique apps like Roposo that feature a distinctive user interface making it stand apart from the crowd. It features an easy to navigate user interface and a well-organized home screen that allows the user to access various categories without any hassle. The screen shares a wide variety of video genres at the bottom, giving the app a clever touch. The app eliminates the need for scrolling through the screen or tapping several sections to access the video contents that are uploaded by users and community.

Roposo app features a list of appealing video editing features that could not be resisted. It allows users to select from various filters and add special effects to the videos. Selections like a daydream, manifold, Mini Party and many others work their best to enhance the video quality and make the content attractive. Users also get the flexibility to adjust the video speed and add stickers that promote customization.

The app also rewards the users with points for every video that they upload. A user can earn up to 5000 Roposo coins on a condition if the video gets featured on the Roposo Star Channel. Users can exchange the accumulated Roposo coins for real cash via Paytm. Roposo offers Rs.10 for every 10000 points (coins) that the user earns.

All the facts that are mentioned above make the Roposo a popular choice amongst the users after the TikTok ban. The app is proving to be a tough competition amongst the various other apps that share a similar concept like Chingari and Mitron.

If the idea of creating a video capturing platform for business purposes has been in your mind, then finding this period as a great opportunity to launch your app can be a profitable decision.

App cloning is a popular alternative for developing a software solution. Using the cloning technique helps the developer gets rid of the tedious and time-consuming processes involved in app development.

Clone Apps are the pre-structured platforms of the parent app with no branding allowing the developers to personalize it as per the clients' requirement. Using clone apps has become a common practice as it provides quick results for the client and shortens the long and intensive duration of app development.

TikTok clone scripts are pre-structured scripts that share similar coding to their parent apps and hence similar features. There are many advantages of using clone scripts for TikTok clone development that contributes to its huge demand amongst the service providers these days.

Saves Time And Effort Using a clone script saves developer's a lot of time that otherwise would have invested in conducting new research and development. Hence, it reduces the time and effort required for the development of the video-sharing platform.

Cost-Efficient As the developer takes less time in providing the software solution, it reduces the costing involved with the app development allowing the investor to save funds for other aspects that are related to the project (like marketing and advertising).

Increases Success Rate Another benefit of using a clone script is that as it shares similarity from an already tried and tested platform, it reduces any chances of collapse and hence increases the success rate.

Many new players are entering the market with their unique video sharing platforms. However, this does not soak up space for you to invest in a similar concept.

After reading this article, you must have got a fair understanding of the processes involved in the TikTok clone app development. The investment in creating an app similar to TikTok is very small when compared to the wide demand of the platform. Investing in an app that shares a similar video creating and sharing concept; however, along with advanced features can be a wise business decision during the pandemic time.

How Much Does It Cost To Make An App Like Tiktok?

**What is TikTok?** TikTok is one of the world's leading entertainment and music streaming mobile app. The company has the intention to create a platform that allows the user to capture and present their creative video making sense to the world....

How much does it cost to make an app like a Tiktok?

Cost and Features To Develop An App Like Tiktok

Entering the social video sharing app segment can lead to various benefits, we have compiled a list of top features along with the cost to get an app like Tiktok developed.