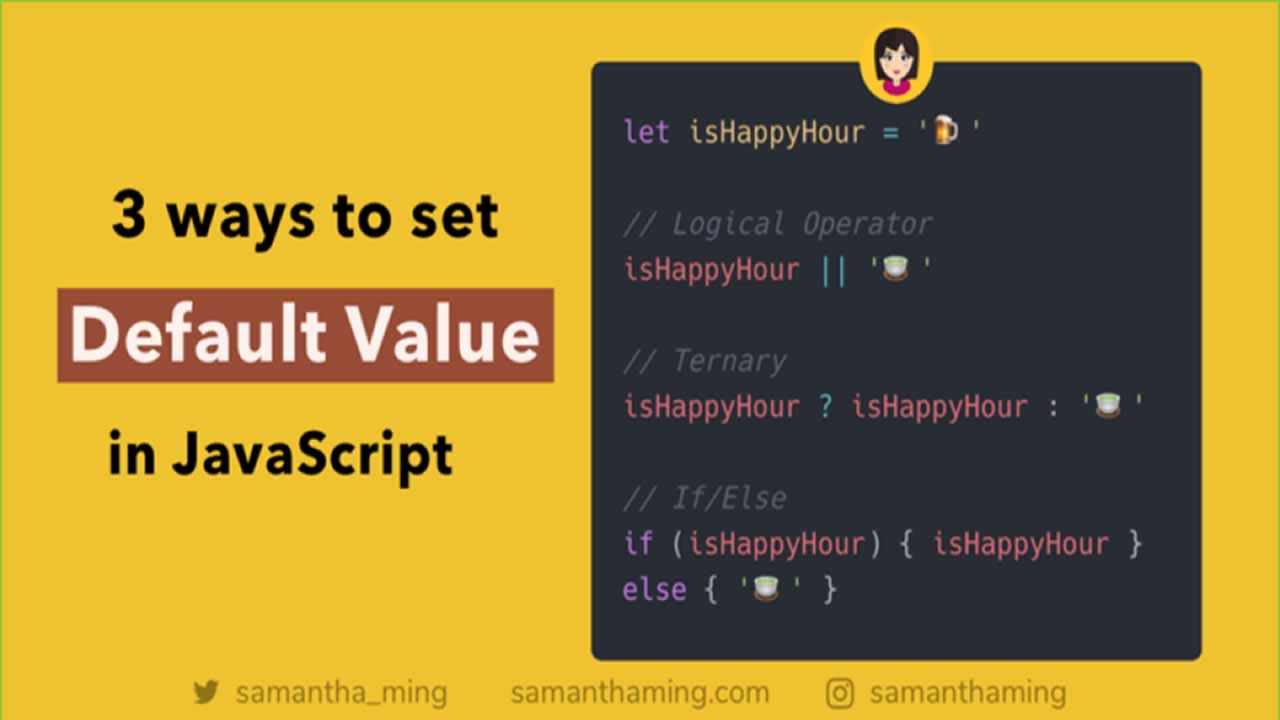 My go-to has always been the ternary operator for assigning a value to a variable conditionally. But ever since I discovered that “||” can be used as a selector operator, I’ve been using that more. I find my code so much easier to read 👍

Yes, it takes some time to wrap your head around it. But once you grasp the concept, it’s super handy. Now I don’t think less code makes your code better. But in this instance, I prefer the || operator 🤩

I’m sure most of you thought the || is only used for boolean checks like this:

Head explosion yet?! No worries, let me explain it the way Kyle Simpson explains it. He is the author of “You Don’t Know JavaScript” - a free JavaScript e-book.

Quite often you would see || being used like this:

Note: this is not the recommended way anymore. It’s way better to ES6’s default parameters. Because quite often, you might not want the default to kick in for ALL falsy values – I’ll explain falsy values in the next section. Most likely, we only want the default value to be set if no value or undefined is passed as the argument.

In the || operator, the 2nd expression (right side) is only evaluated IF the 1st expression (left side). So let’s check what constitutes a falsy value.

(I wrote another blog post on Falsy Values, which you can read it *[here](https://www.samanthaming.com/tidbits/25-js-essentials-falsy-values "*here"))

Compared to the && operator

In my previous post, I wrote about the && operator. (Read it here). The && is also known as the Guard Operator. So here’s a quick summary of the difference:

This is an interesting one. In JavaScript we have || to set default values. In other languages such as C++, this behavior is similar to the Elvis Operator which is denoted as ?:.

As to why it’s called the Elvis Operator:

When to use which?

Now that you understand Falsy Values, let’s figure out which way of the 3 ways is better to use.

This is great if you want to capture all falsy values. It’s less code and it’s way easier to read. Assuming that everyone understands all 3 behaviors, of course.

NOTE: I’m not saying less code is always better, one can easily try to be too clever and shorten the code which renders it unreadable. We write code for others, it’s a form of communication. It’s always better to go with the option that conveys understanding over being clever.

Let’s say we don’t want to capture ALL falsy values. And we only want the default value to kick in when it’s undefined

This is the option with the MOST control. And it’s something I would absolutely go for if say, I need to perform an additional action.