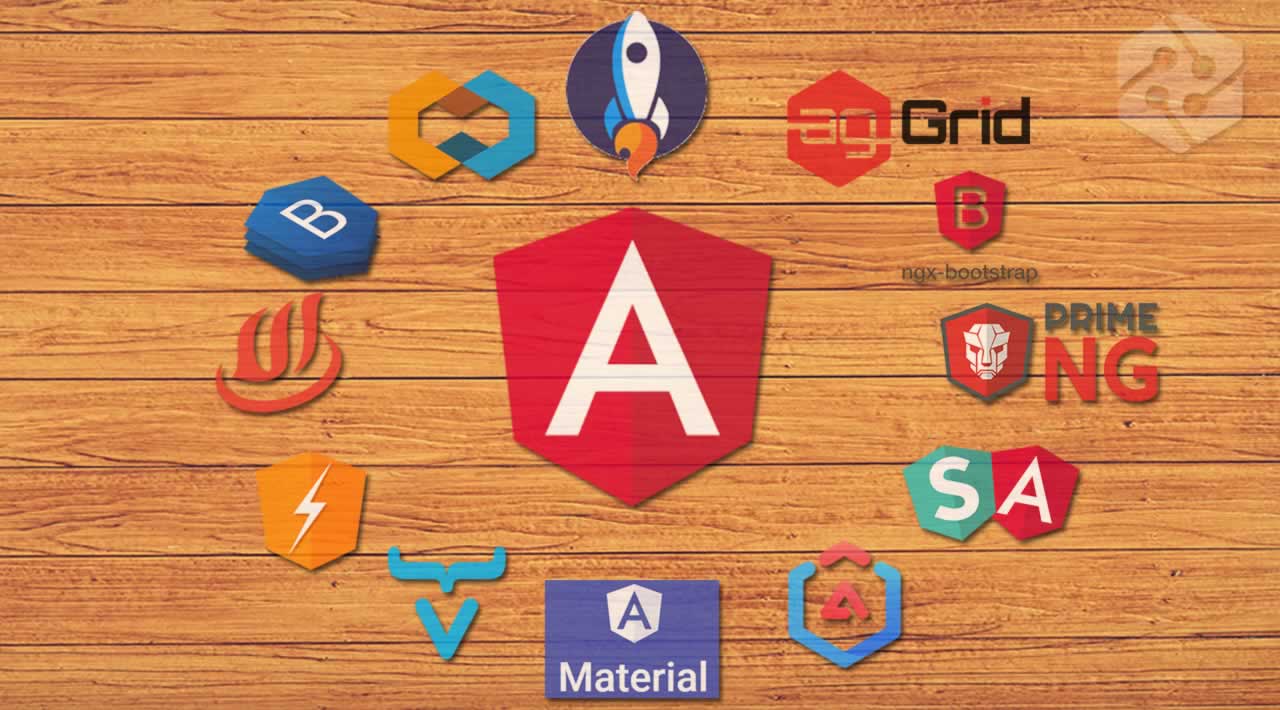 Today Angular is considered as one of the most sorted after front-end framework around the world. In this article, you'll see top 12 Angular component libraries to try in 2019. The Angular framework comes with best practices and tooling designed on it.

Just like other Top JavaScript Frameworks like Vue and React, Angular encourages the developers to make use of components in a way that the UI remains separated as a standalone entity and reusable parts.

If you want to use those Angular components,you need to have a clear idea about what is good in the market. For the same majorly used component libraries are mentioned below:

ag-Grid is a feature-laden data grid which has been developed for Angular. It can be integrated with different Angular versions like 2,4,5,6,7 so as to deliver enterprise features to the application with the kind of performance you expect. It comes with more than 63 Core and Enterprise features which make it possible to have ready implementations. Some of the common features of this modern day grid are Filtering, Sorting and Pagination.

Some of the reasons to choose ag-Grid for your project are:

Angular Material components, which was earlier known as Material2 is an official component library which implements the material design of Google. It is built using TypeScript and Angular. These UI components follow the best practices of the Angular Developer when writing the Angular code. In order to generate a number of templates from the command line, you can quickly add a new feature. A number of compomers are also added like Badge for element status, Tree for data rendering and Bottom-Sheet service for interaction with panel display.

Some of the Angular components which you can use for your Angular project are:

Clarity is a design system which comes from VMware and is open source in nature. It brings together an HTML/CSS framework, UX guidelines and Angular components. On top of Angular, it offers a set of performant components that are data-bound. As Clarity is designed on the basis of continuous research and exploration, it can be equally good to be used by designers and developers.

NG BootStrap offers Bootstrap 4 components for *Angular *and this way it has replaced Angular-UI bootstrap. It does not have any third party JS dependencies while it offers high testing coverage. By making use of right HTML elements along with aria attributes, here all its widgets will become accessible.

Some of such Bootstrap components that can be used are:

NGX-Bootstrap library comes with all core **Bootstrap components **which are under Angular. This library is designed with adaptivity and extensibility in mind and performs well for Desktop and Mobile. The Bootstrap framework is quite popular among the frontend developers as it offers a number of *Bootstrap *capabilities which can be used when handling Angular applications. For all screen sizes available across different devices, this library offers app scalability and high performance. For beginners, it offers multiple examples and detailed documentation for a better understanding.

Some of the NGX Bootstrap components are:

Onsen UI is a popular library for mobile web apps and hybrid app for iOS and Android by using JavaScript. This component library offers components with Flat and Material designs and comes with binding for Angular. It offers automatic styling based on the kind of platform you want for your project.

Some of the components included in NG-Lightning are as mentioned below:
LookupsBreadcrumbsButtonsBadgesDatatablesIconsRatingsSpinners

This component suit is a comprehensive set of more than 80 UI components which comes along with different themes that are from flat to material design. It is quite easy to use and customize the components of PrimeNG as they are designed professionally. The mobile **UX **comes with layouts that are responsive and touch optimized. It is possible to make use of simple to complex form elements like graphs, tables, sliders, and pop-ups. This library is used by big brands like Fox, eBay, and others and is one of the popular libraries for Angular in the market.

Vaadin provides Material inspired UI components for web and mobile applications, which helps to bridge the gap between Polymer elements and Angular components. Here the elements are kept in different repos even when they are grouped as a single one as you can find individually on Bit. In order to get a better experience for sharing the codes between the developers and apps, the library integrates Git, package managers, and other tools. It helps you take all the pressure outside your codes as it will let you with codeshare by reusing or sharing components without configurations or refactoring.

This library offers you more than 30 Material based Angular UI components which are easy to use. This library is specially designed for high volume and high performance data scenarios.

NG-ZORRO component library works on to offer a complete enterprise-class UI which is based on Ant Design. It is written in *TypeScript *and comes with define types. This library comes from the Chinese and the best solution for web applications. A set of Angular components which gives added capability to ng-Zorro while the design and development resources and tools make it a complete package for Angular.

When we talk about JavaScript frameworks, Semantic UI is one of the popular UI components you can find in the market. ngSemnatic is built on the top of Semantic UI and Angular 2.

Some of the ngSemantic UI components mentioned here are
ListMenuSegmentAccordionSelectButtonLoaderRatingMessageFlagInputFormDimmerSidebar

The Angular component libraries mentioned here are the most relevant ones available in the market keeping the current scenario in mind. You can start using them in your project to get the best of user experience.